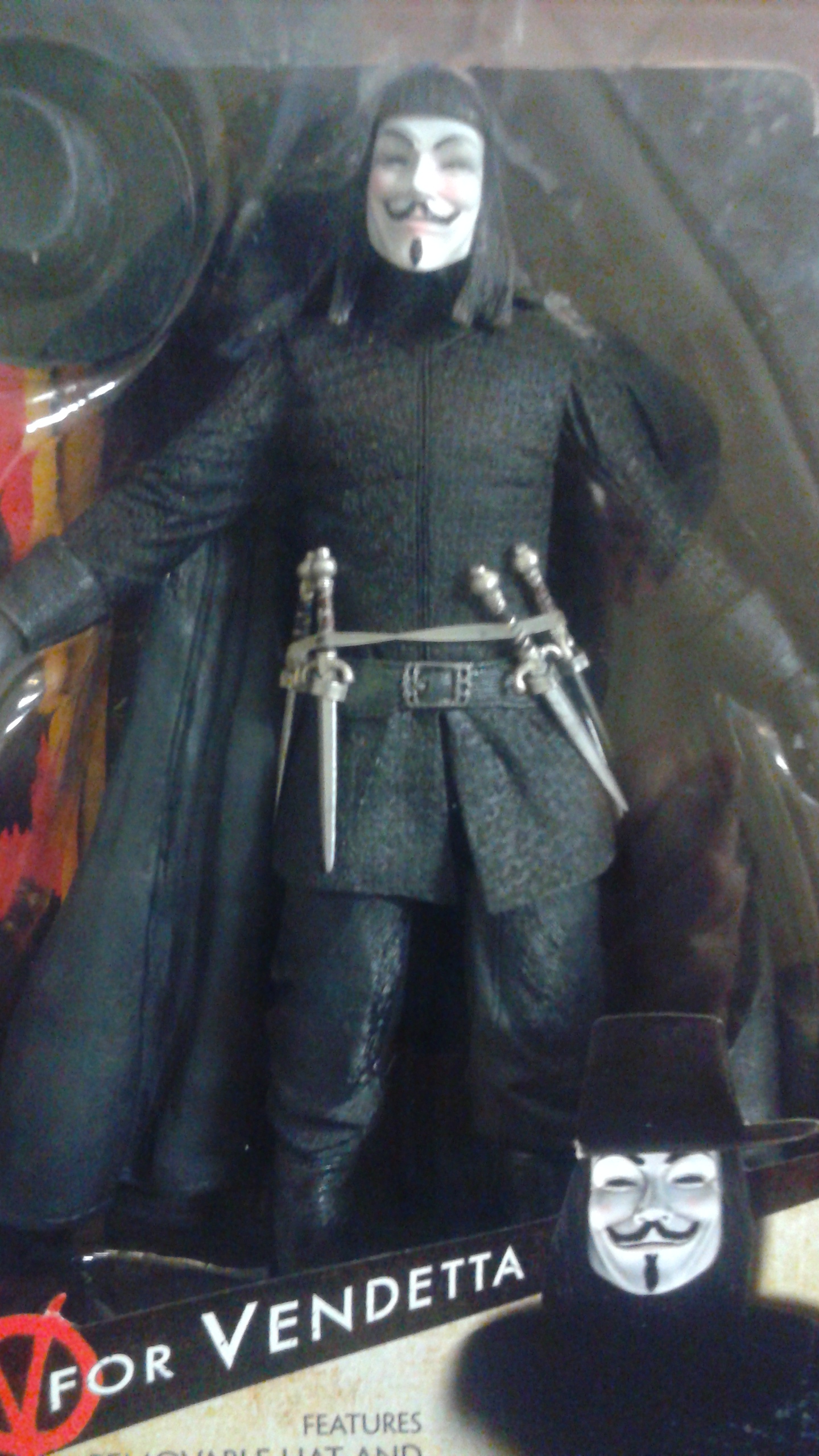 Every movie reveals truth in some Way.  ‘V for Vendetta’ is one of My favourite movies of all time because I think it is one of the most accurate portrayals of Truth I’ve seen in a movie, though there are a lot of really, really good ones.  I chose to Write about this because I think one of the main themes in the movie is largely overlooked and I feel it’s the most important in the film.

It really is a fabulous movie.  Every single Word is worth paying attention to, I pick up new details every time I watched it, I’ve probably seen it three or four times now.  From the very first time V meets Evie, every Word and Act of V is God-like – both in authority and power.  He is the White Knight in disguise, dressed in Black.

One of the very first themes presented in the movie is the foundation for all of man’s laws, ‘silence is consent’.  V brutally kills two police officers who would otherwise have violently raped Evie.  Every moment leading up to this scene is a series of ‘coincidences’ as Evie and V prepare themselves for an evening out, leading them to this rendezvous, the Magic of the Universe bringing the two destined souls together in this violent situation.  Evie’s innocent, loving nature has a divine purpose in God’s plan and the Universe ensures she is protected by giving her V.  Evie gets what she deserves, the police get what they deserved.  V knows that if he had not killed the men and left Evie, she would still have survived and the men still would have paid, no man can escape his fate in the eyes of God.  But all three (two officers and Evie) would have suffered a great deal more had V not showed up.  He provided quick, swift justice, that which ‘just is’.  Evie thanked V for his heroic display and saving her life.

In doing so, she is now an accomplice to murder.  Is she guilty?  There is Your primary moral dilemma.  Most would agree V is, he has little trouble compromising his enemies, he could surely have detained them and had them tried for what they were attempting to do.  But V didn’t trust the laws of man so He did what He believed God would do if He were a man.  And I agree, though I could never kill a man, I would have defended Evie and taken My chances but the men would not have been killed.  I might even end up in jail but Evie would get away and that would make it worth it.  It was for that reason the movie was recommended to Me because I once called My Self the ‘bad-ass Buddha’.  If I provoke a fight with someone I Will lose, it is the law.  If someone provokes a fight with Me, I Will win, it is the law.

So now Evie is an accomplice to murder, and in the very next scene V takes Evie to watch the destruction of the Parliament building, to Music.  I think I actually exclaimed, “No Way!” when I saw the scene.  Right there is Your most powerful example of real magic in Your world.  Destroy a thing that represents an Idea and the Idea Will die if that was the Intention.

I saw the movie after I had done this.  I literally burned My old Self.  These were the kind of posts that people figured were going to get Me locked up.  V explains to Evie that although the building was empty (see, he’s not all bad) that part didn’t matter.  Consider the weight and mass of a building compared to the weight and mass of a piece of paper.  Consider that the more time that goes into creating an Idea, the more powerful the effect of its Magic and think about how much more of an Impression (which is actually a Depression because the building is coming down) destroying a building has compared to My little bonfire.  I needed to find some Way to replace all those Ideas.

If necessary, take a look at all the pieces of paper You can make out in that bonfire.  There was no freeman movement before I did this (bonfire, not what I’m doing now), just like there was no occupy wall street before I occupied the Vancouver Art Gallery.  The moment I did these things, there was a surge of other people doing similar things all over the world.  And it was after this that all the great teachers in My life found their Way to Me.

V does all the evil deeds that are necessary for Evie to carry out his intention.  His Way is wrong but His intention is right and Intention is all that matters.  Really.  That’s why it would be wrong for Me to hold the officers who interrogated or arrested Me responsible because they were doing what they believed was right and in many cases, I would be relieved and happy to know that police take their jobs so seriously.  I was angry because I believed that if I said I was a man of God it would be enough.  Whether it should be or not doesn’t matter, if I had claimed to be anything other than the name given to Me at birth, I should probably have something to show the officers.  Like it or not, that’s how man’s fiction works.

Anyone who claims We are being manipulated or brainwashed by mainstream media and television would be right but that doesn’t mean it is wrong.  Every movie tells Us in some unique Way how to play Our part on God’s Stage and all any of Us have to do is suspend disbelief long enough to believe You are the hero in every story.  That’s what I am.  And I tell You now that the Hero in V for Vendetta is Evie, not V.

V played the perfect ‘Father’ or dominant male role while Evie played the perfect ‘Mother’ or Divine Feminine.  V suffers every time he harms a man, he has simply learned to ignore the emotion over his knowledge of Truth, he knows it does not serve him.  He tortured Evie.  Tortured Her.  I swear to You I have tears in My eyes right now thinking about the scene.  He did it to show Her what I am hoping to show the world.  That doing good is better than anything else in the world because true reward is not of this world.  Evie discovered She was eternal and that if She died defending V, She would have succeeded in her task on this Earth, it was Her only requirement.  Why save for another lifetime what You can accomplish now?

When You play the Villain, You don’t get to see the end, You have to die like V did because what You do Will be done to You.  The shadow government is not Our problem, it is the real government that everyone complains about and they are in their current positions because We put them there.  That is one thing I can proudly say I can never be held responsible for, I have never voted because I always thought politicians were idiots (but excellent actors, in some cases).  But the problems exist because for the most part, We haven’t taken full responsibility for Our lives.  V’s sacrifice was that He died, the Victory was that His Dream succeeded Him, the Love of God knew the Power of God.  Evie’s sacrifice was that She had to be tortured before She could really know Her Power.

Love was what motivated V and He ruled with the Power and authority of a heartless (but no less God appointed) King.  He had to do the unpleasant Work, the hard Work, He was the Executioner.  Without His Influence in the world, Evie’s Train would never have left the station.  Every life He took was worth it for the greater good, a small price to pay for the millions that would be saved.  Consider a world with billions of people and consider that the only Way to accelerate the arrival of the Mythical, Magical Christ character, was to put an equal amount of the opposite energy into the Universe.  What if the ‘Powers that be’ did exactly this to manifest Me.  Do You now wish Me dead for what they did or Will You be happy to know that My being here saves all of man a few thousand years faster than You otherwise would have evolved?

I cannot tell You how true this is.  The best example of Your Powers that be is V from V for Vendetta, doing the hard work, the unpleasant stuff, like a parent spanking their child for misbehaving, slowly making things more and more intolerable for each of You until finally someone says, “Enough!!!”.

For Me, You might guess what the Sound of that Trumpet was…

Rereading this post I discovered that I did not touch on a couple of fundamental points I wanted to make.  First, that it is generally perceived that V is a Hero and it is important that is understood, too because He is.  You just can’t ‘win’ the game by playing that Way, You Will not see the fruit of Your labours on this Earth.  It also means that the powers that be die and this was already foretold to You.  You learned about foreshadowing events in books, We know the White House was also attacked by a plane.  World trade center and government were targeted.  That means they die in Magic Land.  And the Masters of Magic in Your world know this as well as I do and it was shown to You in V for Vendetta.

The greatest conspiracy is that these events were an inside job.  As I mentioned before, if it was, then Your own government and banks are asking to be destroyed by the rules of their own Magic.  Imagine for a moment that they did this on purpose because they are tired of babysitting and wanted to force Us to grow up already and take charge of Our life.  Just an Idea…