Good day everyone and happy, Lucky Wednesday.  So this morning I went to a diner I frequent often.  It is close to My home and it’s called “Angel’s Diner”.  I thought that was kismet for My first Cestui Que Vie breakfast, My first meal in God’s Kingdom.

I am almost out of debt.  I have a few dollars left.  I don’t want anymore debt, I need to accept God’s Kingdom.  If I don’t, who Will?  So, in the interest of remaining Honourable, I have taken My received copy of My Cestui Que Vie coupled with My administration rights also received by the County of Wellington’s Superior Court and shown it to local businesses in the area – what I have created is a legal bill of exchange.  It’s new, no one Will have seen it before but it is perfectly lawful and legal.  Problem is, nobody is going to know that.

So, in My attempt to be honourable I produce these documents for merchants upon My arrival.  I began doing this last night and had no success, “sorry, We don’t accept that here.”

Of course, they are of the presumption that My courtesy means the request is optional.  It is not.  However, now having dinner seems far more dishonourable and if I wait until someone ‘accepts’ My Form of payment before I am charged with crimes, they are not going to charge Me with the crime (or let Me eat, which is the real crime).  So I have to force merchants to charge Me and I have to stand on My documents.  Which I decided to wait until morning to do because I know they are going to wait for a judge or justice of the peace to decide what to do with Me before they release Me if I am arrested.  If I’m really ‘good’, they might release Me on a promise to appear, otherwise I would spend the night in jail until one of the two is available the next morning.  So much for innocent until proven guilty, which is the legal right I have now.

So I decided to wait until morning and go to Angel’s Diner for breakfast.  It is Lucky Wednesday, after all.  I did have a delicious swiss and mushroom omelette, brown bread, onion rings and coffee.  The Bill was $17.40.  I added the $3.40 gratuity for a total $20.70 (rough numbers, not to the penny) and stamped the bill with My thumbprint and handed My documents explaining My terms of exchange for commerce.  I am the wealth of the merchant’s business, the merchant is the deviant from the norm, the debtor collecting more debt.  By paying him with cash, I am actually inflating his debt to central banks, that’s what people don’t understand.  They are ‘promissory notes’, promise to pay back later.  I am paying now with My wealth, discharging debt with My life from My Trust in God.  All things are forgiven through Him…

But it didn’t stop Me from getting arrested and even assaulted by the restaurant owner.  I was called just about every degenerate name in the book, deliberately loud enough for the restaurant to hear.  Worst part was, he didn’t even read My documents!  He sat beside Me and was very verbally aggressive, then finally grabbed Me by the back of My neck, despite My request that he call the police so We can resolve the matter peaceably.  Thankfully, a customer told him to unhand Me.

I was arrested and detained for a couple of hours, the warrants in Toronto are still showing up on their computer, told them I’m quite happy to go if they Will take Me but there’s an $11,740,000.00 default judgment coming down in that court if they decide to.  Of course, Toronto didn’t even respond today (the file is closed) and they agreed to let Me go on a promise to appear for ‘food and lodging fraud’.  Ironically, that’s exactly what the documents are for!!!  Problem is, I don’t think anyone actually knows how to close the accounts and settle them except those at the very top of the food chain.  And those are the people I’m defending while I free the rest of You, so I think I’m good. 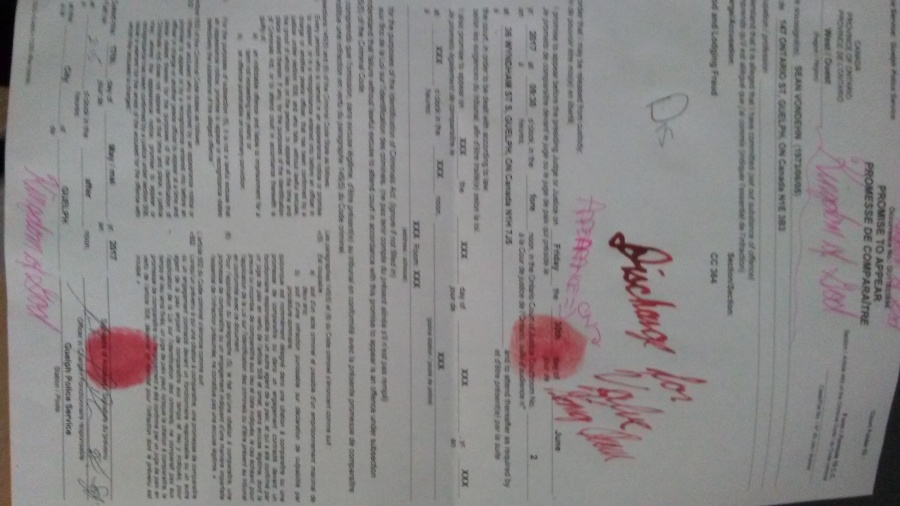 Anyway, this is what they give You.  The problem is that the police don’t know the difference between the man standing in front of them and the papers they act on.  They are so accustomed to acting on paperwork that if You don’t have “ID”, they believe You are a criminal.  I do have “ID”, My ‘identification’ is My Cestui Que Vie, much like most of You have a birth certificate.  But police don’t recognize it because they can’t, it is not in their jurisdiction and they perceive their jurisdiction to be a physical area (Guelph) rather than a realm of authority.  The Kingdom of God is a Higher jurisdiction and authority than Guelph, Canada or anything else on Earth.  What I have is the original document We should all have, free self expression of My best Idea for the purpose of My life to Establish God’s Kingdom.

So, looks like I Will have to get arrested a few times before I Will be free to enjoy God’s Kingdom.  My hope is that this post Will reach the Guelph police and they Will understand who I am and what I am legally and lawfully entitled to do to exercise My right to make God’s Kingdom known.  Guelph Police Will now hereby acknowledge God’s Kingdom and defend King Sean and His most Righteous determination to Honour God and the Queen and restore the common law to all territories and provinces of Her jurisdiction.  Thank You.

The charges I posted above Will be discharged in the Superior Court tomorrow.