Hello everyone and welcome to the Thursday Thing King Edition of The Good News Journal, thank You for being here.  I have a Special Edition to share with You today as I decided to attend the opening of an Art Exhibition celebrating the 500 year anniversary of the world’s Greatest renaissance Man, Leonardo Da Vinci (or at least the Greatest renaissance Man in My humble opinion).

The exhibition is on display at the Ottawa Science and Technology Institute and included a one hour presentation featuring a few experts on Da Vinci and his [vast] contributions to Art, Culture, Mechanics, Industry, Philosophy and Writing.  He was Truly a ‘Jack of all Trades’ and Master of virtually everything he touched. 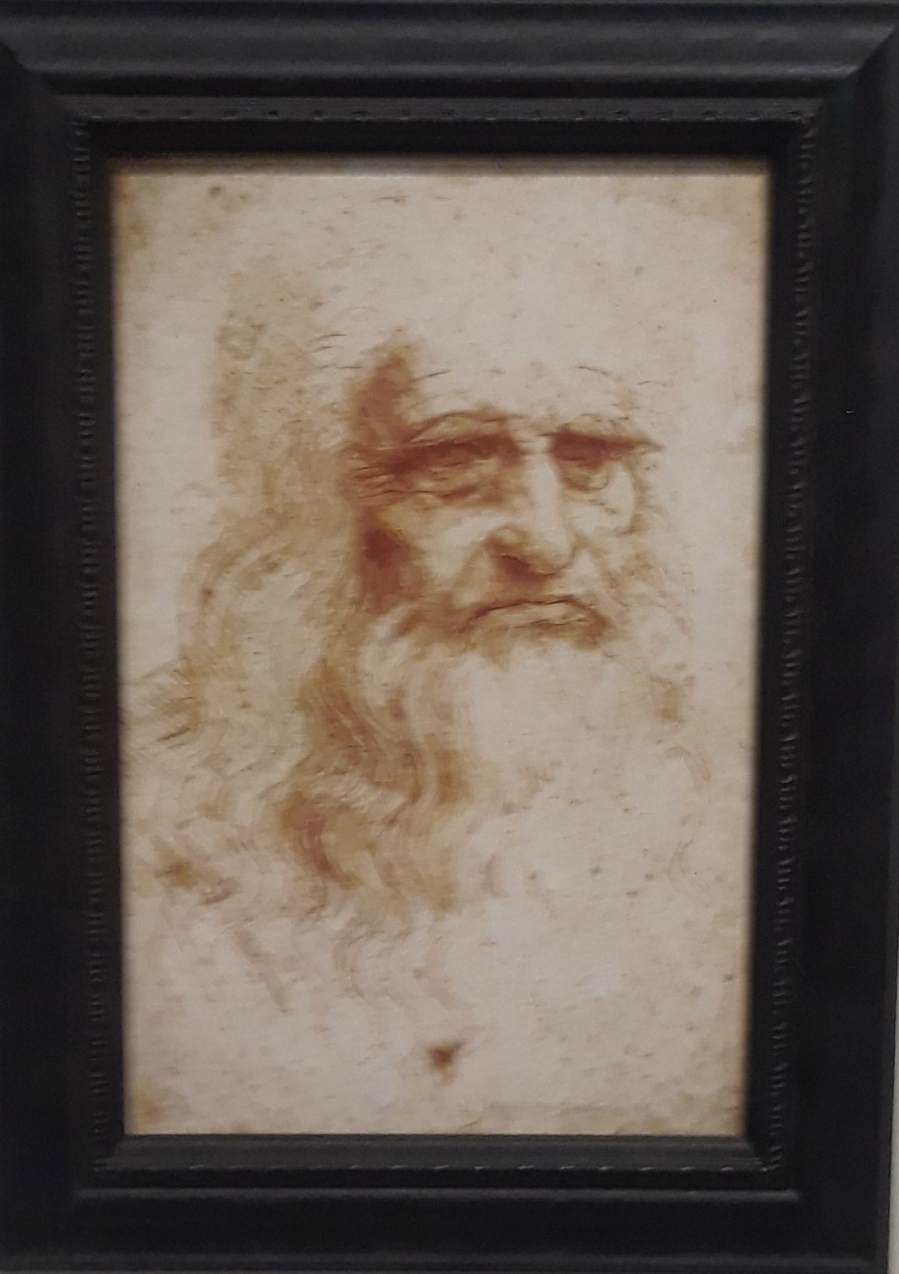 I Writ a Post recently sharing some links about one of Da Vinci’s most notorious Works, ‘The Vitruvian Man’, tall King about how it was actually named after Vitruvius, an Italian architect Writing a book about how Architecture should mimic the Macrocosm (as above, so below) by emulating the perfect proportions of Man.  Da Vinci studied the work of Vitruvius and felt that he had portrayed many of Man’s proportions inaccurately, and endeavoured to perfect the work – the result was Da Vinci’s famous ‘Vitruvian Man’.  These same proportions are still incorporated into virtually every significant masonic building created since, and are still implemented in modern architecture today.  I also suggested the Vitruvian Man is actually a Secret Code for Man.

There were several random quotes like the one pictured above scattered throughout the exhibit.  I could literally have taken hundreds of photos but plan on visiting the exhibit again before its conclusion on August 2nd.  Thankfully, photos were permitted as none of the exhibits on display were originals.  All works photographed are digital reproductions, in some cases recreated using oil paints and other materials designed to replicate those used by Da Vinci.  Ironically, I thought I would not be permitted to take photographs until I observed another woman taking some.  I mentioned how relieved I was to see someone else taking photographs and she said to Me that she Wished she could take photos of everything, but the notebooks on display appear to be originals (and photographs of originals are not permitted).  I pointed to an information piece concerning the exhibit explaining that all works on display were recreations, not originals and she laughed,

“Well thank You for pointing that out!  You would think I should know that seeing as I was the one who wrote it!”

I was surprised, too.  She explained that she didn’t Write the English, but she had been commissioned to Write all the French translations and had forgotten that detail.  It was a humorous little conversation. 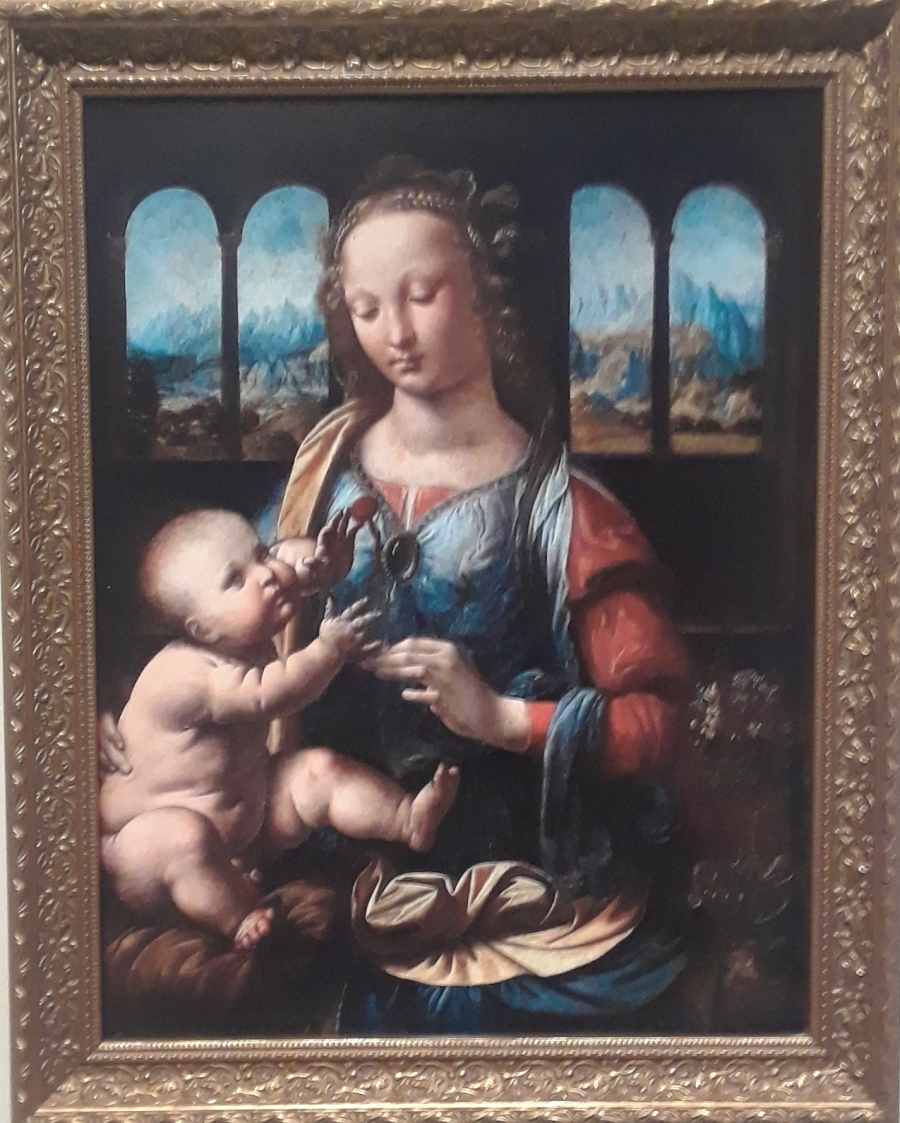 Some of the works were very convincing!

The photo above is one of the works the lady I was speaking with thought to be an original.  As convincing as it looks, it’s not.  The notebooks and papers Writ by Da Vinci are so fragile and Sacred that they are not to be moved or exposed to [normal] light.  The Vitruvian Man is apparently so Sacred and fragile the original is never on display and never moved.  I thought that was kind of interesting.

The painting pictured above was very interesting because I took several photographs of it and no matter what I tried to do, the camera on My phone would not focus.  Not that I’m a great photographer anyway, but it was very, very, strange.  I couldn’t even get the camera to ‘appear’ focused before snapping the shot, regardless how much I tried.  Maybe it was the lighting or something. 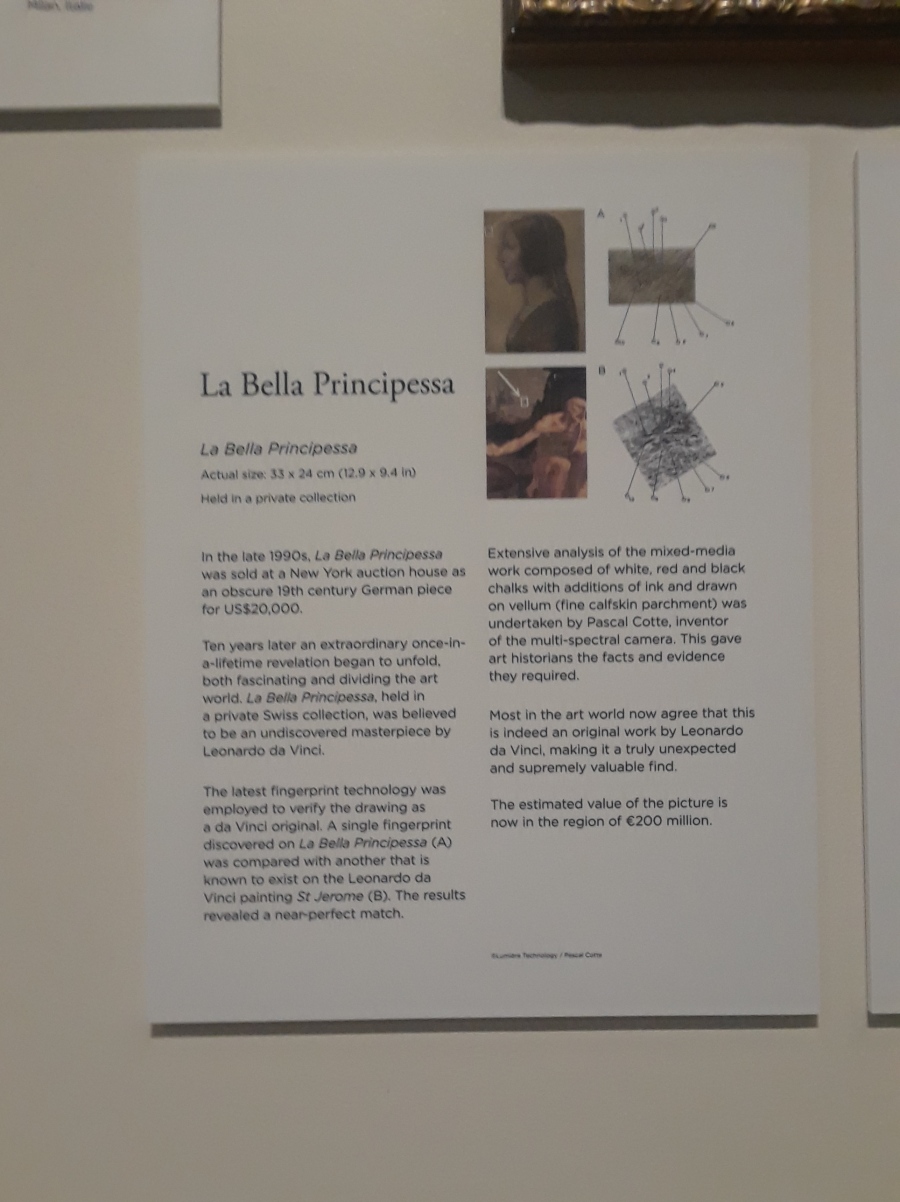 Another detail I found very interesting is that Da Vinci did not Sign any of his paintings.  This is something My Friends have often commented on regarding My own paintings.  I won’t Sign a painting because I feel it takes away from whatever it is I’m trying to Create; it ‘spoils’ the Work.  Recently, because My Friends like the fact that I often use My thumbprint to ‘Seal’ documents rather than Sign My Calling, I have started identifying My paintings with a thumbprint in the lower right corner.  I’m not sure if Da Vinci did so deliberately or not, the information above mentions Da Vinci’s print was used to identify one of his works many years later, but it does not mention whether or not Da Vinci deliberately included the print in his work, or whether it was an ‘accident’.  He was known to be a perfectionist, so I believe any prints found on any of his paintings was absolutely intentional.

I liked this one because it’s unfinished and hints at his technique.  There was also another quote by Da Vinci I found particularly interesting, though too many People were in the way to photograph it and I eventually lost patience waiting.  However, it read something like,

“No painting is ever completed, only abandoned.” – Da Vinci, paraphrasing to the best of My memory.

This is exactly how I feel about every painting I’ve ever ‘completed’ and why I Will never really consider My Self an [talented] artist.  There are so many others with far greater Gifts for painting than I Will ever know, everything I create feels like it is unfinished but beyond a level of completion I Will ever be satisfied with.  Essentially, I get to a point where I am more concerned that further effort Will depreciate the work rather than improve it.

The two similar photos above are what new technology suggests an original Da Vinci may have looked like at the time of its completion compared to the works One would see if they were to View the original in an Art museum today.  The fading of colours of paint over time seriously effects the work (and one of the reasons I believe if Masters like Da Vinci were still alive today they would be using modern acrylic paints with all the new technological advancements like UV protectors built right into the paint medium, rather than the classic oils, which yellow over time).

Wow, 1000 Words already!  Okay, I just wanted to share My special evening with You.  I rarely treat My Self to events like this, and I am still celebrating with a half size bottle of fine Italian wine, Italian Brie cheese, and (Canadian) crackers.  Meh, two out of three aint bad!  Don’t Mind My slang. 😉

Love You all, thanks so much for joining Me.