Hello every One and welcome to the Sensei Sean all Saturday Edition, and Living a Purpose Full Life, Part IV.  As always, thanks for joining Me.

Before I get into today’s Post, I’m going to share the Card My wonderful Mother sent Me for My name day one more time.

Really, the main reason I Wish to share is to emphasize that there are no coincidences.  Sure, it’s possible My Mother read My Blog and knew I was Writing a little ditty about Living a Purpose Full Life and went out looking for cards specifically related to the theme I was Writing about…  But seriously, the chances are very, very slim.  Chances are, My Mother had no Idea I was in the middle of Writing a feature about Living a Purpose Full Life, this is just an example of Our ‘cosmic connection’.

The Tarot is all about knowing there are no coincidences and understanding every Card that Presents it Self is a Gift offering In-Sight to Keep One Focused on their Life Purpose.  This series of Three Cards represents a further development of the Ideas expressed by last Three Cards, the continuation of the Story, so to Speak.  On Center Stage, We have the Queen of Swords. 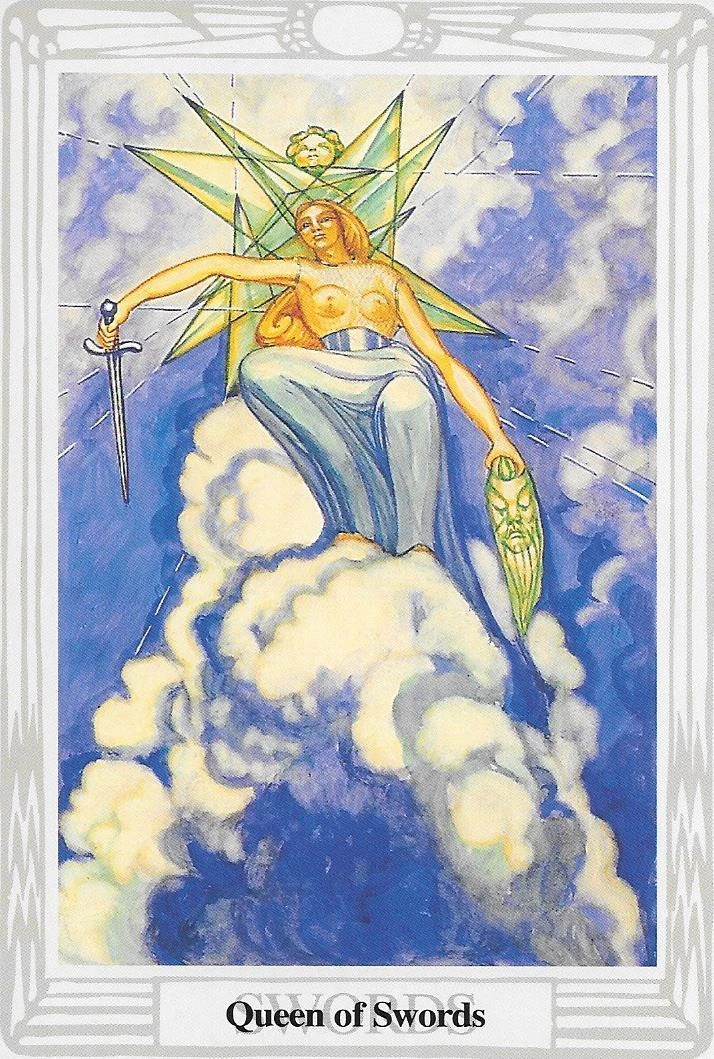 Generally, I have been using the Book of Thoth for descriptions of the associations for each card.  This Time, the Queen represents the watery part of Air, which represents Mind/Ideas.  It may also be of interest to Note that ALL Queens represent water, just as the Queen’s Laws govern all of the Common Wealth.   Once again, I don’t believe in coincidences, so (to Me) the fact that all Queens represent water is a constant reminder of the Queen’s dominion over Our Current (energy) Commercial Admiralty waters.  Water also represents collective consciousness, so this Card seems very fitting as a natural progression of the previous Ideas.

I have been using this site for some of the photos of individual Cards (like the one above) and found the description Given to the Queen of Swords here to be very much in Keeping with Our overall Theme.

“The Thoth Queen is sitting on a cloud, with sword and mask in hand, as she is the mask-cutter. She is the fair witnessing mind who removes all illusion and sees the Real that is masked by personal reality.”

We are tall King about the Apocalypse, the unveiling, the unmasking of Illusion.  How fitting is the Queen’s description in relation to the Ideas I am tall King about?  I did not capitalize the ‘R’ in real in the above quotation, either (lots of People Cast Magic in their Spelling).  I’m also not responsible for the italics in the quote, it was cut and paste directly from the website.  Mask-cutter = Man seeing True Self (through the illusion of ego).

“She is the ‘fair witnessing mind’ who removes all illusion…”

Does that not sound like the kind of personality We would Trust to govern Our Justice system, One who can see things as they are, without any preconceptions or prejudices?  This is an extremely rare quality.  Very few Judges and Justices in the world can truly see things as they are (if any), which is why they are dressed in black robes, representing night and darkness, the absense of light.

The Queen is dignified by the Four of Cups, Luxury.  It sounds nice, but the Queen of Swords represents the element of Air, and Wind makes the Commercial Admiralty Waters turbulent.  Let’s see what the Card represents.

A couple of things to point out right away with respect to this Card.  I have suggested that Four represents Foundation, and the Thoth description of the ‘4’s is:

“The important characteristic is that Four is “below the Abyss”; therefore, in practice, it means solidification, materialization. Things have become manifest. The essential point is that it expresses the Rule of Law.”

I bet most of My audience didn’t expect that Words like “Rule of Law” would come up as much as they do in the study of Magic and Tarot.

“the energy of this element, although ordered, balanced and (for the moment) stabilized, has lost the original purity of the conception.”

Hmmm.  Again, Cups represent water, which I am suggesting represents Commercial Admiralty Jurisdiction, the ‘Common Law’ of Man’s world.  I am actually here to try to explain to Man the Perfection of the Original Idea which has in Deed ‘lost the original purity of the [Immaculate] conception’.  I still find it amazing how all the Cards in a read relate to each other and the Story they tell.  Before I go on, I couldn’t resist including this quote as it relates to Our Theme and the current collective consciousness of Man.

“For although the number Four is the manifestation and consolidation of the dyad, it is also secretly preparing catastrophe by emphasizing individuality.”

Individuality = Ego.  This is intimately connected with Living a Purpose Full Life, and something I Will be tall King more about after I have concluded the full reading.  Wind stirs the waters, and We don’t even need the relationship of the Cards to know that the Current ‘Luxury’ is unstable.  Could luxury represent commercial wealth, the ‘victors’ in Man’s CAPITALIST, Commercial Admiralty world?  Keep in Mind, this Card dignifies and/or influences the central Idea, the Queen of Swords.  Let’s see what the next Card has to say.

Ooh, this looks like another doom and gloom card, doesn’t it?!  One or more of the Swords appear to be broken, the red background Gives a sense of Fire and destruction (like Our Tower Card, previously), though this Card is the Element of Air (all Swords represent Air/Mind).  First, let’s see what the ‘Virgin Universe’ has to say about the number 10 (which I have suggested represents a New Age/Aeon).

“The tens are a warning; see whither it leads to take the first wrong step!”

It doesn’t speak specifically about representing a new age or aeon, but it does talk about destruction and (as We would suspect), Ruin.

“It teaches the lesson which statesmen should have learned, and have not; that if one goes on fighting long enough, all ends in destruction.”

Did the last Card not suggest it was ‘Secretly preparing catastrophe by emphasizing individuality’?  (Rhetorical, it did – I just Wished to point that out.)

So We have a Queen, sitting on a cloud, holding a mask in one Hand (representing the unveiling) and a Sword in the other.  She appears bored.  We get a sense that ‘Luxury’ is temporary, and that perhaps the Seas of Commercial Admiralty water Will be rocking the boat – perhaps it Will even CAPSIZE the citizen Ship?  The Four of Cups are just barely stable as they are, with the Winds of Ruin Whipping things up, it’s gonna get stormy  I’m sure it’s just a coincidence all these Ideas fit so beautifully…

One last thing I Wish to point out before calling it a night, the Four of Cups, Luxury also has a Pisces symbol turned sideways at the bottom of the Card, which also represents Water, Jesus (Fish) and the Idea that 6 is 9 and 9 is 6.  Also, it is very important to Note that in this Universal Song, the ‘statesmen’ represent government, not the People.  It states later that after the war-mongering statesmen have all been destroyed, the Peasants (People) are able to Peaceably return to their farm/field/flock…  All the Good ‘F’ Words. 😉

Tomorrow, the Fourth sequence of Cards represents the ‘psychological basis of the Matter’.

I hope You are all enjoying My introduction to the Tarot and Living a Purpose Full Life.  When I have finished reviewing all the Cards, I Will expand on the relevance of the read to the overall Theme of this Blog and My personal, Purpose Full, Quest.