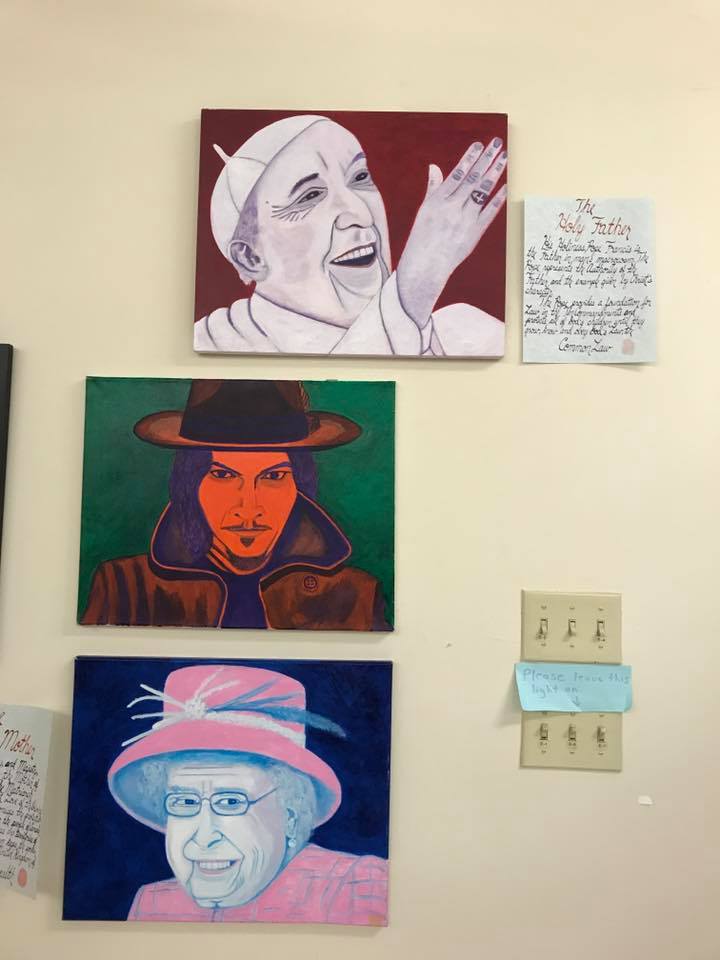 Hello every One, and a Happy Father’s day to all the dad’s out there, My [not so] little Brother in particular.  I Hope and Trust You are all having a Wonder Full weekend.

Originally, I had intended to continue Our Tarot interpret-a-Sean today, but I had forgot it is Father’s day.  And a day dedicated to Father’s would not be something One would easily forget if One has a fabulous Father.  For Me, it’s kind of Funny that Father is an ‘F’ Word because We know what People typically mean when One says, “‘F’ You!”

The reason it’s kind of funny for Me, is because I am suggesting that Letters are Symbols, and every Letter We Read is having an effect on Our psyche by the Ideas associated with each Letter in One’s subconscious.  So the ‘F’ Word being a ‘bad’ Word and also the first Letter of Father, is just another assurance that there really are no coincidences; at least not in My Universe.  My biological father Will not be hearing from Me today, or likely any other day before he dies.  He’s 77 this year, and he’ll probably live to be over 100.

But all of this is relevant to Our recent [Tarot] Read and Living a Purpose Full Life because the Word Father also represents the Idea of God.  Doesn’t Matter if You believe in God or not, or what You are thing King of God; in Man’s subconscious, Father = God.  Consider what kind of internal psychological conflicts that could have on One’s Mind if One doesn’t have a very Good father.

When I learnt this, I didn’t like it because of the kind of father My dad was.  He is nothing like God, that’s for sure!  The Stories I could tell would shock You.  However, he was exactly the father I needed, and he was exactly the father I had as King of God for before I even chose to Come here.  And crazy but True, his name is actually Joseph if translated to English; ‘Joachim’, though he goes by ‘Joe’.

So I never understood the connection to the Idea of God and Father when I was a child.  Psychologically, this had the effect of confusing Me into thing King I didn’t know what God was, either.  The God they were teaching Me about in school was nothing like the relationship (relay-Sean-Ship) I already had with God – I knew God intimately, He was My best Friend.  He’s the reason My father didn’t Matter.  But some People weren’t even sure if the God they were tall King about existed.  It’s a hard thing to try and explain because I had no reason to believe that any One else knew God any less than I did, so it seemed clear to Me that they must be tall King about something else.  So I wanted to know what God was just as much as every One else did.

God is the Voice inside You that says, “Yes, You can.”

My biological father was all about, “No, You can’t.”

So I never listened to that voice.  I only know We can accomplish anything We put Our Mind to.  My father Gave Me a reason to prove it.  Over and over.  And it was never Good enough.  Nothing less than perfect would ever be Good enough, and I was never perfect.  But it never bothered Me.  Initially, maybe.  But the other Voice was louder.  And every time it made Me a little stronger.

My father is German and I’m the first born son of the family.  In German culture, the first born son is ‘groomed’ to replace the father should anything happen to him.  He would tell Me these things as early as the age of five.  His job was to make Me tough – physically and mentally.  And he did.

He also represented the Power and Authority in My Life as a child, which are other Ideas associated with the Word Father/God.  My Mother, on the other Hand, was the opposite of that.  My Mother represented all the Characteristics of the Divine Mother of the Tarot; Love, Nurturing, Kindness, Compassion, Mercy.  From the perspective of a Spiritualist, these were extremely important Ideas for Me to experience as a child.  God Gifted Me with the perfect parents to comprehend the collective misunderstanding of God, the ‘Father’ of Man’s Macrocosm.

This is why I believe the Tarot are an important tool for any One who seeks to better understand One’s True ‘Self’.  My Microcosm as a child was a Perfect reflection of what God actually is.  All the Power and Authority of My biological father, and all the Love and Care of My biological Mother.  The actual God Man is seeking to know is the Perfect Union of both Ideas.  The Divine Feminine is missing in Man’s Macrocosm.  Only masculine Ideas are associated [subconsciously] with the Idea of God, and that’s why We have difficulty associating the Idea of God with the Father; it is not completely True, it is only half True.

In My Book, I used the Word Love to represent the Idea of God in an attempt to avoid this association.  In My personal Microcosm, I never thought of God as My father because of the example and experience of My own father.  What Man calls God is and was more like My best Friend.  Kind of cool that I’m a Gemini because I was able to associate the Idea of God with My ‘Twin’.

I Will be tall King about these Ideas more, but this is the reason We are currently Living in Babalon (Babylon), and why this was the Central Idea Presented to Us in My last read.  Notice how the woman and the Lion are below ground.  This represents the repression of the Divine Feminine, the Sacred Mother and Ideas associated with SIN.  Notice the woman is holding up a Cup, which Symbolizes the Holy Grail.  She appears to be Giving birth to a New Idea that Will emerge upon the Earth.  Could it be the Golden Dawn We see on the horizon?

We all have different Ideas about mother and father based on Our childhood experiences.  It would be difficult to make proper associations with the Ideas associated with those Words as a result.  But even the family We experience in Our individual Microcosm is still a Macrocosm of what each of Us are individually.  This is why there is now so much debate about ‘gender roles’, because We are beginning to comprehend that We have equal measure of both qualities, even individually.  The Divine Feminine has just as much Power and Authority as the Father, and the Father is just as Loving and Compassionate as the Mother.  The Perfect Union of these two energies makes One a whole E Trinity, or Holy Trinity.

So once again, who are the Father and Mother of Man’s Macrocosm?

I’ll have more to say about this later, too.  Although I was barred from the facility twice without cause, and refused any support for a proposed Art Exhibition about Man’s Common Law system of Law and the True Duties and responsibilities of elected officials to the People of Canada, the Salvation Army Ottawa are using these three painting to promote their organization, website, and an art program I had absolutely nothing to do with.  It is also worth Noting, these three paintings were never returned to Me.  I was also the only participant to not have them returned to Me.

This was one of the other reasons I didn’t feel much like Writing yesterday.  I only noticed the photo posted on the Salvation Army’s website yesterday.  It’s not just the fact that they’re ‘My’ paintings and were Part of an exhibition I am still working on, it’s the fact that this is the only photo of the exhibition Posted!  There were easily over twenty other paintings on display from People who were actually in the art program they are promoting!

On the other Hand, this isn’t going to hurt My complaint against the Salvation Army and city of Ottawa.  I’ve also since re-Created each of these Paintings, this Time Sealed with My thumbprint in the bottom right corner.  They were intended as Gifts for the Queen and the Pope at the end of My exhibition, I Wonder what they would have to say about the Salvation Army losing them…

Love and Blessings, and happy Father’s day to all the dad’s out there!