Hello world, and welcome to the Fantabulous Free Lance Friday Edition of the Good News Journal, thank You for being here.  Yesterday, I was preparing to Write a Letter as King the city of Ottawa to compensate Me for My injuries…

These are the kind of Letters I’m not really comfortable Writing, yet it has to be done.  I mentioned previously that I was Given two Gifts by the city of Ottawa in the final Letter from their legal council, Geneviève Langlais.

The first, was that Shelley Van Buskirk’s unwarranted assassination of My Character was not mentioned, which suggests to Me that her comments do not reflect those of ‘the city’ in general (it’s just the final assessment of Housing Services as the investigative branch).  Really, One of the main Ideas behind using a corporation like Housing Services to investigate complaints would be to keep it ‘impartial’, not motivated by external political influence, so I shouldn’t have been surprised that council ‘allowed’ Shelley to make that final determination in Writing, they probably can’t interfere.  At the same time, when a Letter is addressed to One with a Logo and the Words ‘City of Ottawa’, it can be tough to remember what One is reading is the opinion of a single individual and not necessarily the metropolis (or it’s official representatives, in this case).

The other ‘Gift’ was the Wording of the Letter.  Keep in Mind, I have never presumed to be an expert with respect to Man’s ‘fiction’ of law, I am only a Master of the Common Law.  But often One can learn as much from what is not mentioned in a Letter (as in the previous example regarding Shelley VanBuskirk’s determination for having Me barred), as they can from the Tone of the Letter.  Lawyers are always very specific and careful with their Words, so I Wish to share some of My interpretations of the language used in the last Letter (which Will be published as a new Page tomorrow for easy reference).

‘I have carriage of the file‘.  Translation (opinion only) – the ‘file’ is all the determinations made by the Housing Services branch regarding My complaint, having ‘carriage’ simply means to be the one Trusted to deliver the file.  Very short, sweet Way of saying, ‘please don’t shoot the messenger.’

The incorrect determination to have Me barred and assassination of My Character were omitted, ‘the city’ re-iterated that three other major violations of shelter standards sustained (proven True) by the investigation have since been corrected (like a friendly reminder the standards were not being met and My complaint has improved the shelter for other clients – no further injury is being done).  Finally, some Words are ‘friendlier’ than others.

“We will continue to respond to your judicial review application should you wish to proceed.” – The City of Ottawa

It may have been unintentional, but ‘Wish’ is a Word from Common Law used to Honour a King, as a King’s ‘Wish’ is His Command.  Even if this was not known and unintentional, it is fair to say that the Word is chosen for its Friendly feel.  It is unquestionably courteous, and above all, Honourable.  I have said that I owe an apology to Geneviève, and I still do.  For now, it is more important for Me to Honour ‘Lady’ Geneviève for the Way she has Handled (had carriage of) this complaint.  We often hear about how ‘sleazy’ lawyers are.  I know this can be True because I’ve encountered it, too.  However, I have met far more lawyers that are truly Honourable individuals, Geneviève Langlais is one of them, Shouldice was another (knew nothing about Me but defended My Honour in Court and prioritized My Matter over everything else going on that day), and I have a few in My Microcosm now.

Finally, Geneviève Signs off with, ‘Regards,’.  That’s the only part of the Letter that’s really not so Good.  Again, I could be Way off, but typically she Signs off with ‘Kind regards’, or ‘Best’.  I lost the Honour of ‘Kind’.  I accused Geneviève of reneging on her Word by not producing a Letter from Jason Prevost when she really has no control over what Housing Services chooses to do.  Her role is to Act as council, she cannot compel her client to perform in any particular Way, she can only advise.  It was a mistake, and one I regret but can’t take back.  I Will be formally as King for Give-ness from Geneviève for My trespass.

Anyway, that’s My interpretation of the city’s last letter to Me after a little more reflection.  Oh, and ‘We will continue to respond if You Wish to proceed’ sounds like a polite invitation (as opposed to ‘go away’).  It Shows they are still open to discussion and resolution.  These are all Good Signs.

Those little details made Me feel a little better about Writing My Letter of Demand.  I know Geneviève isn’t going to make the same amateur mistake I made and take My Letter of Demand personally.  I believe Geneviève is a fantastic lawyer, the best I have ever personally known.  Council can’t tell You they know their client is wrong, even if they believe it themselves.  Their exclusive duty is to provide the best defence for their client they can, and treating one’s advesaries with dignity and respect is paramount.  It is something Langlais has always done and Housing Services has never done.  So I took some satisfaction delivering this Letter of Demand today. 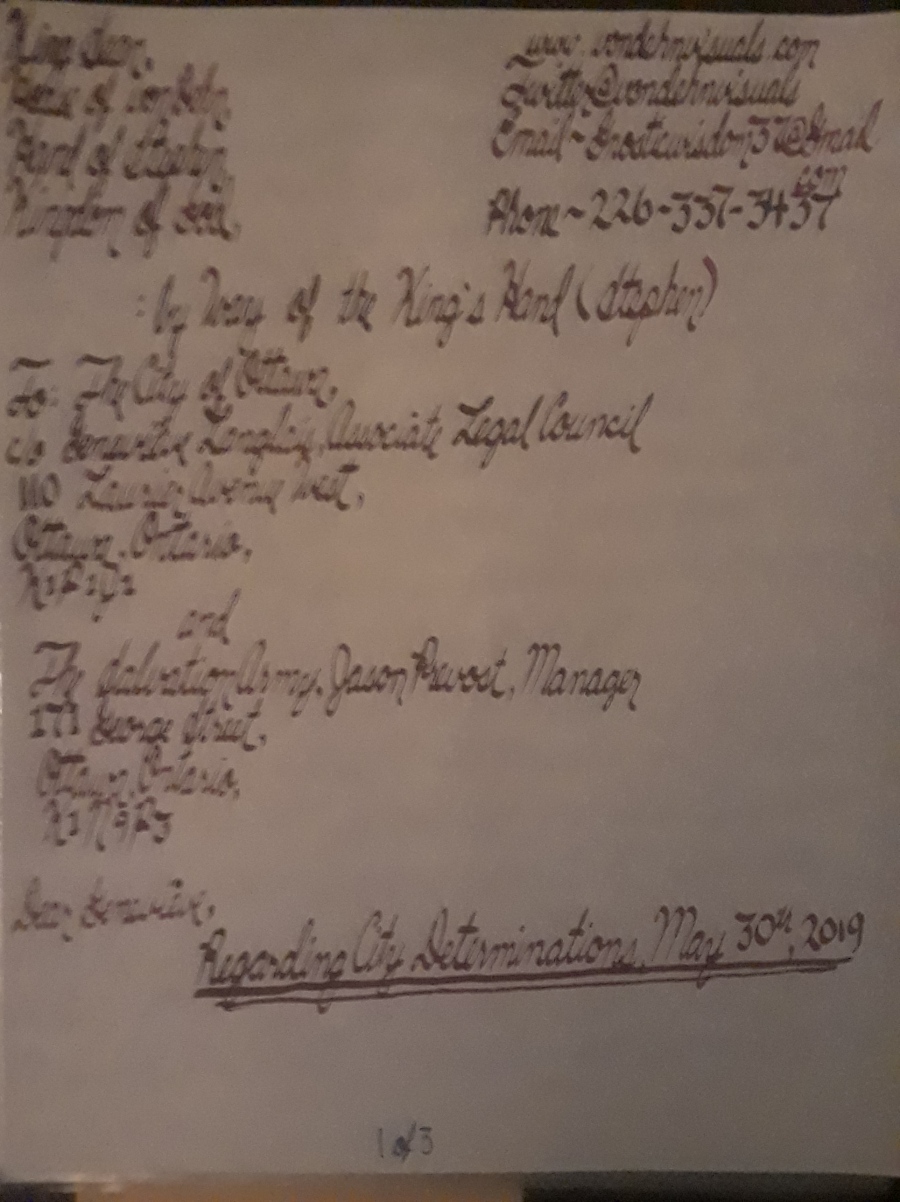 It’s not the clearest, I’m not a very Good photographer but I Will get the Letter scanned sometime soon.  The First Page is more or less a Cover Letter and should identify what the Letter is about, who it’s intended for, and the Sender.  I addressed My Letter of Demand to both The Salvation Army and the city of Ottawa because The Salvation Army is ultimately responsible for the harm done to Me, though the city is liable for contracting with them. 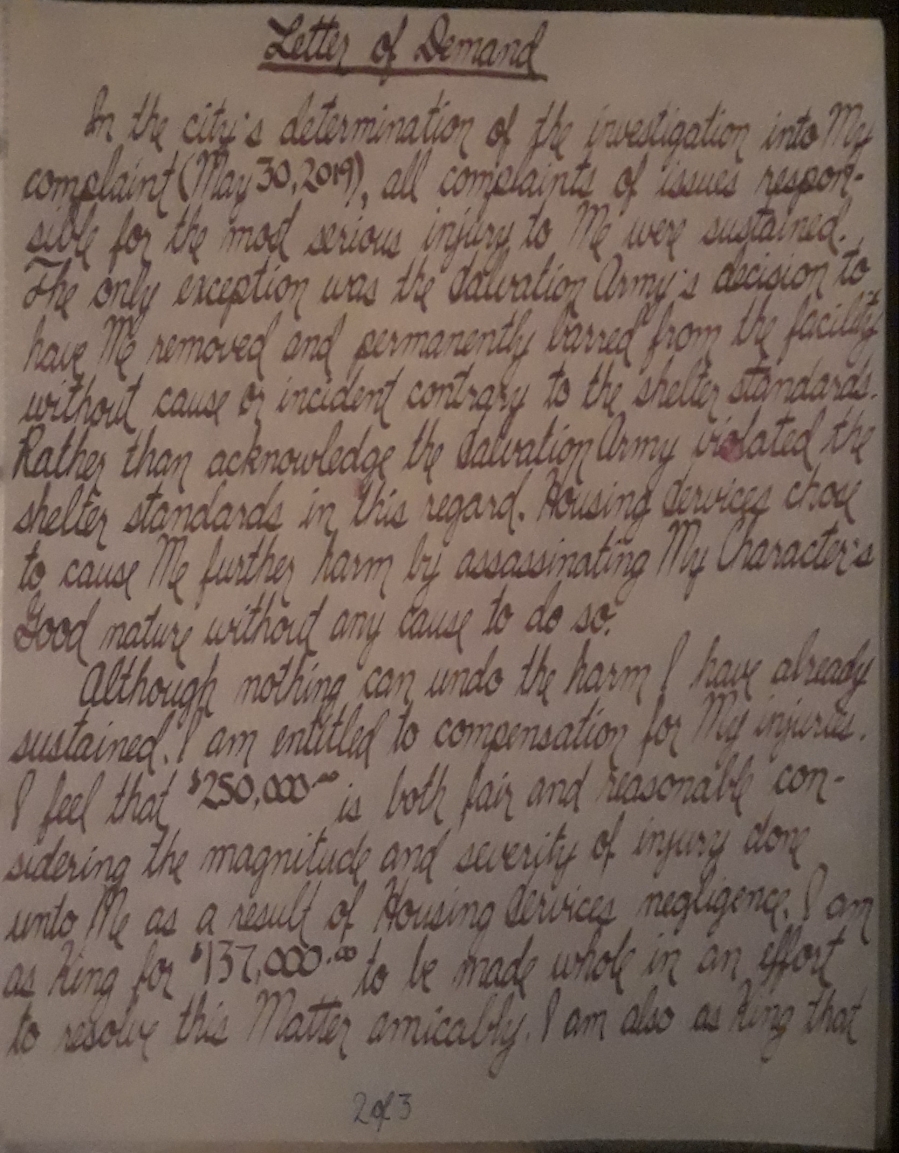 Those were some of the Words I’d been holding back because I did not Wish to speak of them until I had received final Word from the city with respect to Housing Services determinations.  I did not Wish to mention that the very first response from Housing Services sustained a number of serious complaints.  Each response from Housing Services thereafter sustained (confirmed) further complaints and allegations.  The determinations clearly revealed that Shelley VanBuskirk was in fact providing false reports to Chair Deans and members of council regarding the shelter conditions, and in particular, the respect of clients rights with respect to the Ontario Human Rights Code.  That’s fraud.  Claiming Housing Services does not have the ‘authority’ to request application forms to social programs is a flat out lie.  Housing Services are required to maintain a copy of all application forms to social programs in order to authorize the appropriate city funding.

It might be hard for People to believe that I Truly have no interest in money, but I don’t.  Yet I am as King for $137,000.00, even though I know it Will not undo what has already been done.  It won’t make any of this ‘okay’.  And although I may not have much interest in money (and I’ll explain why later), other do.  If I don’t Demand compensation for harm done to Me, I Will be setting the wrong kind of precedence.

This turned out a little longer than expected (and too late to actually publish on what was a Fantabulous Friday), and I Will be tall King more about this over the weekend.  I have a lot of other little things going on in My Microcosm that I must Keep Secret for now, but believe Me, things are happening Lords and Ladies!!!

For Me, this is what it means to be Living a Purpose Full Life; in the Service of God…  And the Queen. 😉

“Honour thy Father and Mother”