Good evening every One, and welcome to the Good News Journal’s Super Natural Sunday Re-View Edition.  The weather has been hot – very hot.  I feel a little guilty for having not Writ an entry for the last couple of days, but as much as I love the heat, I could not sit at My desk to Write.  Any paperwork not in plastic sleeves have curled themselves into scrolls the air is so damp.  My room is literally like a tropical rainforest without the sweet scents and songs of singing wildlife.  Great for My plants, though!

It has also been somewhat challenging for Me to consider what I should Write about.  Once again, no shortage of topics, only ‘where to start’.  As I was leafing through My documents for Thursday’s Thing King Edition, I came across a couple of other gems I have yet to share with My audience and figured they might provide a Good foundation for what I Will be building upon.  This is one of the few documents that was clearly posted throughout the Salvation Army Booth Centre facility. 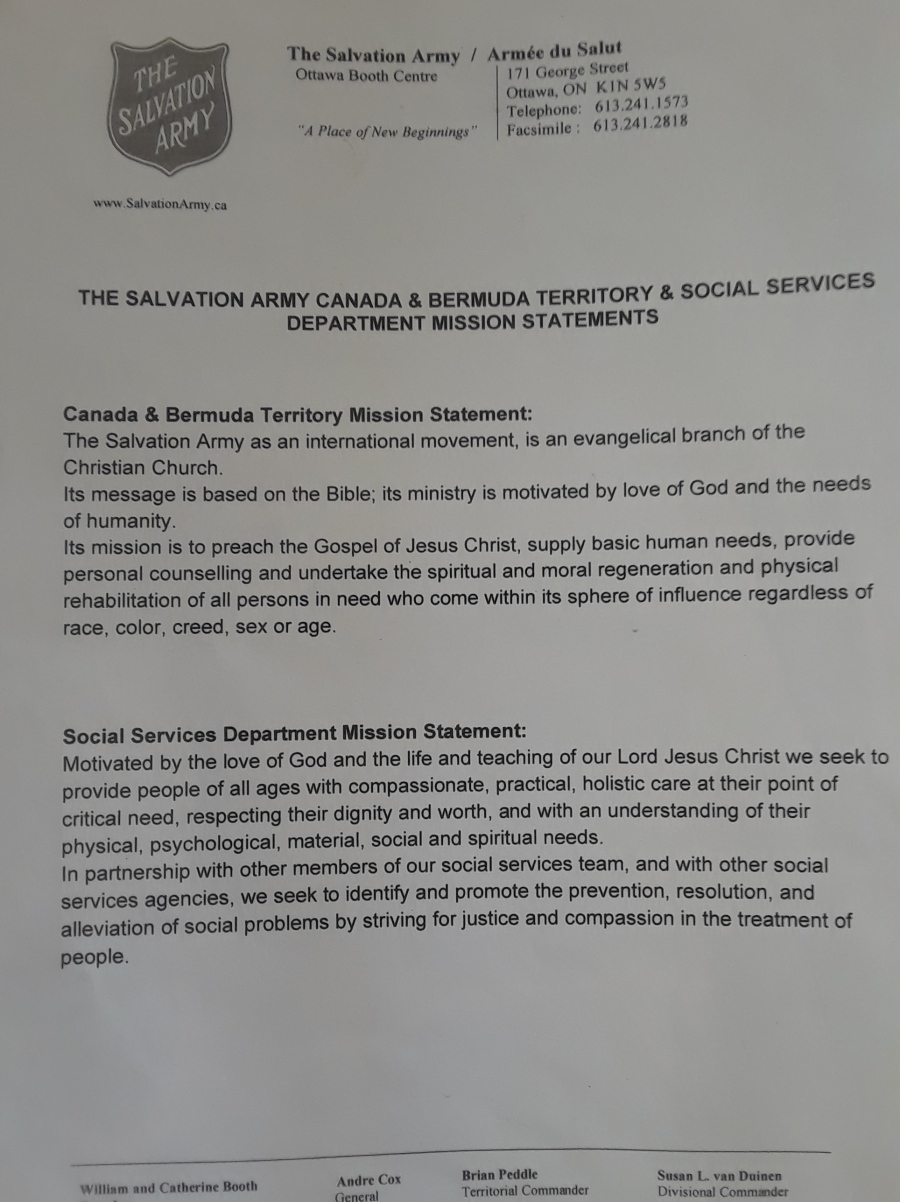 I strongly encourage every One to read this.  One thing I Truly cannot tolerate, is hypocrisy.  This is the Mission Statement of the Social Services department of which Jason Prevost is manager:

“Motivated by the love of God and the life and teaching of our Lord Jesus Christ, We seek to provide people of all ages with compassionate, practical, holistic care at their point of critical need, respecting their dignity and worth, and with an understanding of their physical, psychological, material, social and spiritual needs.”

But it gets even better.

“In partnership with other members of our social services team, and with other social services agencies, we seek to identify and promote the prevention, resolution and alleviation of social problems by striving for justice and compassion in the treatment of people.”

And yet Jason Prevost, general manager of the social services team, is the antithesis of this mission statement.  As I mentioned to the Housing Services program director, Shelley VanBuskirk, “what point is a mission statement if the organization does not endeavour to fulfill it?”.

It’s actually a miss-Ion statement.  A miss direct Ion of Energy.  Legally, it’s called FRAUD.  Jason Prevost is certainly not motivated by ‘the love of God and the teaching of our Lord Jesus Christ’, he is the exact opposite of that and should be fired.  I was tall King with some clients of the shelter today, one Man in particular who told Me he has decided to stay at the Shepherds of Good Hope because Jason Prevost keeps barring him for no reason.  He hasn’t been barred once since he decided to stay at the Shepherds of Good Hope, and is one of the most mild mannered men I have had the pleasure of meeting in My time at the shelter.  For now I am keeping his name anonymous, though he has assured Me he Will be happy to testify to the injustices and arbitrary barring of clients he has witnessed at the hand of Jason Prevost and Meghan Hartley (a previous housing manager no longer with the Salvation Army) specifically.

The interesting thing about all of this, is that it is not unknown to Mike White, or other senior managers of the facility – they condone the abuse of clients, presuming they Will never have the Power to do anything about it.  The more ‘down and out’ and incapable of defending themselves, the greater the trespasses upon their dignity.  Complaints are ignored, client possessions are routinely thrown in the trash, and clients are threated with permanent expulsion from the facility if they try to retrieve their property from the dumpsters.  I watched two clients get permanently barred for exactly this reason, one for recovering a laptop!  Would the Salvation Army have replaced that laptop in stead of allowing him to retrieve it himself?  No, of course not!

The Salvation Army Booth Centre does not respect the dignity and worth of their clients (though many of the frontline workers certainly do – many quit after a few months because they are appalled with how clients are treated, or how they are asked to treat clients themselves).  Captian Thomas Yoo, Spiritual director of the Salvation Army Booth Centre and now retired, was one individual who was absolutely shocked to learn of the kind of conditions clients were subject to, and even tried to speak with Jason Prevost himself regarding the very serious bedbug epidemic.  The next time I met with Captian Thomas Yoo, his disappointment was tangible.

“I don’t know what to say, Sean, I am so sorry.  I have no power or authority over that department, I tried speaking to Jason but…”  and he just shrugged his shoulders.

Captian Thomas Yoo did provide a letter of reference for Me and was kind enough to attend court when I was defending My Self against the Salvation Army’s false accusations.  It was a very pleasant surprise, I didn’t even know he was there until I was finished.  That was the also My first presentation and I had effectively humiliated the prosecutor who had tried to do the same to Me.  As I mentioned previously, Justices don’t like it when prosecutors try to ‘show off’, so I earned some favour with the Justice that day by putting the prosecutor in his place.  When I turned to leave, there was Captain Yoo, sitting quietly in the gallery, a broad smile of astonishment on his face.  He got up and left with Me and told Me how impressed he was with My performance when We stepped outside the courtroom.

“Wow, I have never seen anything like that before!  It is only ten to nine!  If I had been any later I would have missed it, how did You get done so fast?  Usually, when I come to provide support they don’t finish until close to eleven, sometimes later.”

“Yeah, I didn’t wait to be called, I just went and sat with the lawyers.”

“Yes, I see that, but I never see anyone do this before, only lawyers.  Wow, You are a very interesting man!”

Captain Yoo wasn’t able to attend My next court presentation because he had another matter to attend, he’s a very busy man and a very Good man.  I think he was actually helping another man attain housing by meeting with his future landlord that day (if I remember correctly).

He did come to the courthouse when he was finished though, just to see if I was still there and I happened to meet him on My Way out.  That was the day I met the Honourable Justice, Perkins Mc-Vey who felt the entire matter was a conflict of interest. I told Captian Thomas Yoo that the Justice had suggested withdrawing the charges if I could provide proof that I was still at the Salvation Army, Captain Yoo offered to provide Me with the following letter of reference:

Sadly, I never had the opportunity to present this Letter to Honourable Justice Mc-Vey, as I Writ the wrong date in My appointment book (yes, I make stupid little mistakes all the time, some more serious than others).  Thankfully, I was able to have the bench warrant that was issued for Me rescinded with the help of another Honourable individual, Mr. Shouldice (as he was addressed by a court justice – the Spelling of his name was clearly Writ on the side of one of his law books).

One last thing I Wish to leave You all with today, is this link.  I Will be tall King more about this next week, but the Canadian encyclopedia outlines different types of torts in Canadian law.  Everything that was done to Me is covered under tort law and the reason I Wish to include the link is to confirm that Willful torts are considered far more serious than torts of negligence.  Shelley VanBuskirk’s defamation of My Character and the determination of both Housing Services and the Salvation Army that I’m not ‘eligible’ for compensation for the harm that was done to Me is further Willful harm, suggesting My life is worthless compared to the Common man.

When One has caused another harm, they should be offering to compensate the other for their injuries or do whatever is necessary to make the individual feel as if they have been made ‘whole’.