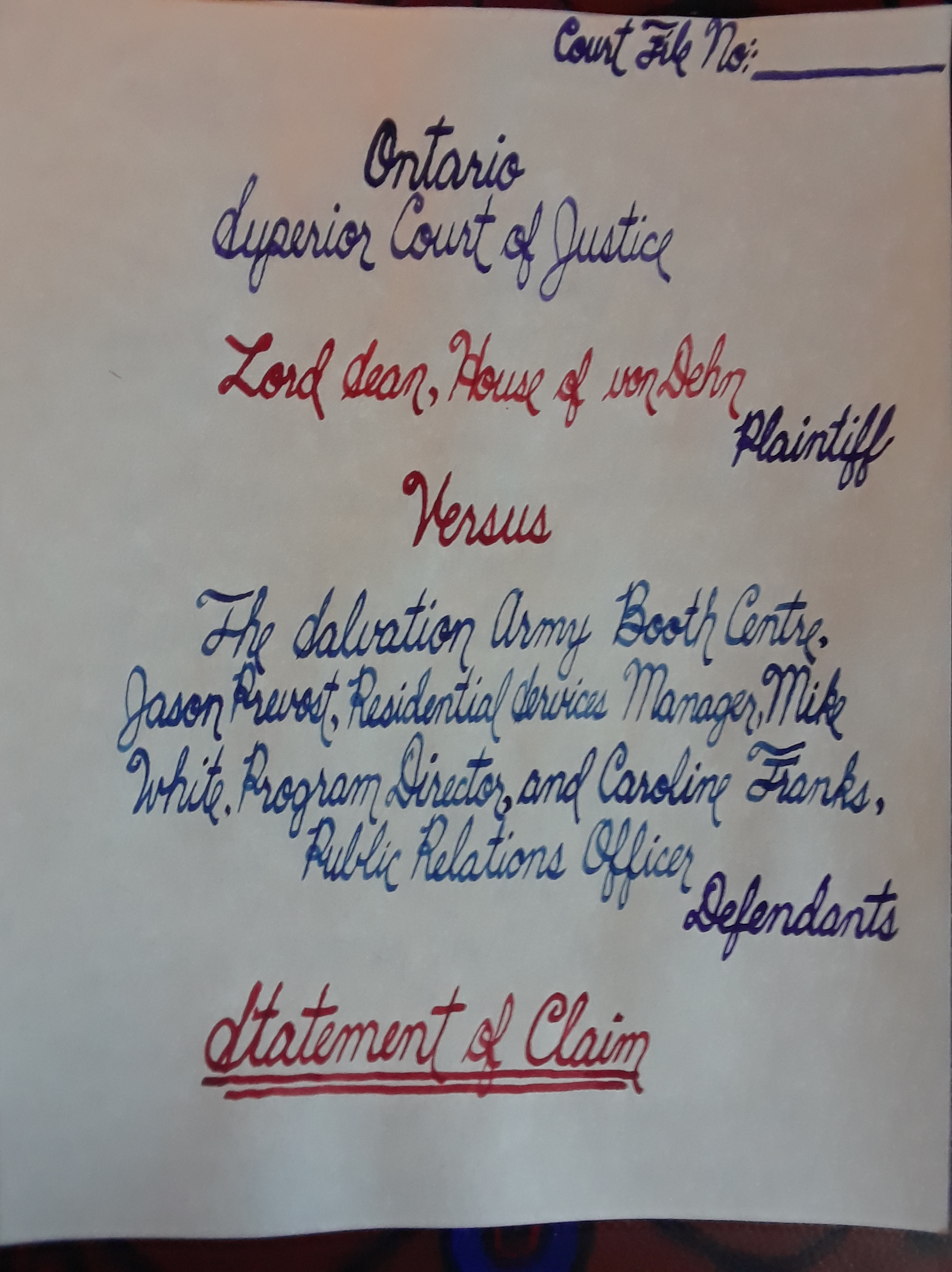 Good day every One, and Happy Sun Day.  The residual Effects of Friday the 13th’s Full Moon Magic are still War King their Wonders in My Microcosm.  Early this morning, as I was turning My Mind toward bed, I began thing King about My Statement of Claim and became so inspired, so Filled with Passion, I could no longer be thing King about sleep and sat down to Author the Writ.

I Wish to be tall King a little about procrastination, too.  I have been procrastinating the start of this project from the moment Mike White determined he is not interested in resolving My outstanding Issues with the Salvation Army, the ‘Seven Nation Army’ [that couldn’t hold Me back] in My Microcosm.  I’m beginning to Real Eyes that I am something of an advocate of procrastination.

From the moment I withdrew My application to the Divisional Court, I did so knowing that the next course of Action would be a legal proceeding against the Salvation Army if they didn’t agree to an alternate resolution (to My Letter of Demand for $137,000), so the Idea has been rolling around in the back of My Mind since the New Moon.

As much Fun as the whole King thing may be, it is also something I take very seriously because I know it’s real, and I know what the Duties and responsibilities of that Title actually mean.  I may make some harsh criticisms of elected officials or other public figures from time to time, and I’m not even sure how People might describe the ‘Tone’ of the Letters I do Write and Publish here on My Blog; I like thing King My Letters are Playful in nature and a reflection of My Character, but they are no joke.

I also happen to know how much My Life is actually worth, which is not any more or less than any other Man’s Life, but knowing that Value makes as King for any sum of money seem truly ridiculous.  So all of these Ideas have been Playing around in the back of My Mind.  Money Will not undo anything that has been done, though there are Act-Ions the Salvation Army could take that would provide appropriate remedy that also happen to be perfectly reasonable.  That’s why I was somewhat disappointed when Mike White said he was not interested in alternate resolution proposals, because it leaves Me no choice but to be as King to a Court to provide the remedy I am Sea King.

I also struggle with the Idea that We are all subject to Man’s fiction of Law in pursuit of remedy against wrong-doing, and that a Man’s ‘rights’ (and the protection of the Law from arbitrary trespass upon those rights) are only subject to whatever codes, statutes and acts that exist to protect those rights in a particular jurisdiction.  I’m also generally opposed to any Justice system that is so complicated and difficult to access that the People cannot understand how to use it or do not Wish to.  Civil procedures should be logical processes, not a daunting deterrent to filing a claim.

So I have been thing King about all of these Ideas, compounded with the fact that I am now painfully aware of the Fact that I’m no longer an anonymous Voice on the internet, and I’m not likely to be any less known than I am now.  Trust Me, I’m truly feeling the pressure for the first time.

But that’s why I’m something of an advocate for procrastination because I’m very Thank Full that I did not start My Statement of Claim any sooner because I needed to put all of these Ideas together.  Once again, I am also Thank Full to You for that, because I know You are waiting to see what I Will do, too.

So how do I stay Focused on everything I Wish to achieve, while being stuck with Man’s fiction of Law for remedy?  I’m going to con-Form.  Remember, a ‘con’ is a Trick, so I’m going to be War King some of My Magic by appeasing both.

This is exactly the same information that would typically be included in Form 4A, ‘General Heading of Documents – Actions’ in accordance with the Rules of Civil Procedure.  What I am beginning to find very interesting, is that the Rules of Civil Procedure [so far] are not very complicated at all, they’re more like guidelines.  Some of the specifics covered in the Rules of Civil Procedure ‘happen’ to be exactly the same Way I was suggesting One should Write a Letter of Complaint or Statement of Defence, with the first paragraph outlining the general ‘nature’ of the complaint, and each additional paragraph addressing specific Issues using a new paragraph for each Issue, and finally a conclusion that summarizes the Letter and States what One is Sea King in remedy and how long the recipient has to respond.  The Court Gives Twenty days.

So far, it would seem as though the Rules of Civil Procedure are just making sure that People respond to Letters in a Common Law Jurisdiction the Way One ought to in the first place!

So far, the Forms for the Rules of Civil Procedure are not complicated at all.  The reason I’m so confident sharing My knowledge, is because everything I share in the Way of information with respect to Canadian Law always comes directly from the source.  I just ‘Googled’ the Rules of Civil Procedure and the Ontario website was one of the first links mentioned, the entire Act is always available on the public record.  I’ve read the Act in its entirety on more than One occasion, now I reference it as necessary.

The other thing I Wish to point out is People have also been as King Me about the colours I use.  Why red?  Why purple?  Why blue for the named defendants?  Well, red represents Blood, Life, Fire, Will, Authority.  Purple represents the Crown chakra, which is why it also represents Royalty and was used here to represent the Crown of Canada.  Blue represents Blood without oxygen, a dead corpus, or corporation.  The Salvation Army is not a Man, it is a dead thing, Acting as an animated corporal fiction and subject to all terms and conditions of the Crown; their license to do business depends on it.

Red also Draws attention, that’s why it is used for STOP Signs.  We know when We see something in red it is usually a Sign of danger or to be aware.  Well, I began to notice that if colour were removed from documents, Man would need some other Way to communicate these Ideas.  ARE YOU PAYING ATTENTION?

In Man’s fiction of Law, all the Words Spelled in all capital Letters are one of two things – a Title or a warning.  These things make Sense because We Wish for People to take Notice of the Action We are ta-King, so red Draws attention to the HEADING (Head represents Mind and the Authority of the House, also).  All caps were also used to point out deadlines and other important details about the legal proceeding.

I am actually thing King that back in the day, they probably Writ legal Forms much the Way I am Writing them now, with red representing authority of the court, as well as titles and sub-titles in the documents.  This helps to make sense of otherwise overwhelming piles of information, One can clearly see the different sections of the document.  All of the things the Statement of Claim ‘threatens’ to do (award judgement if no reply within 20 days) are exactly the kind of things a King would do.

Anyway, the Words Writ in red in My document were Writ in ALL CAPS in the original Form, which I essentially believe to represent the colour red in Man’s black and white Matrix of Law.

Also worth Noting I changed the language of the last paragraph.  What I realized while Writing all of this out, is that the Forms are really just making sure that all important notices and information are Given to the respondent/defendant.  Basically, it’s making sure that an individual can’t claim they didn’t know what the consequences might be, or that this is a serious Matter that requires immediate attention.

Normally, the last paragraph states, “If You pay the plaintiff’s claim and court fees of $_________, within the time for serving and filing..”

Some People Will rely on these Forms and following them to the Letter so much, they may forget that they can be altered.  This might even be a detail My legal Friends would dispute but I’m not going to be Giving them the satisfaction of hearing their opinion.

That’s basically the final Page of Form 14A, the rest is the actual Statement of Claim.  Changing the last paragraph of Form 14A is a very Significant detail and one of the reasons I’m so excited to share this with You today.  This was My ‘Saving Grace’, My ‘eureka!’ moment that inspired Me to get this law suit under Way.

I believe what I am as King for is extremely reasonable (though I won’t reveal what that Will be just yet, I’m sure some of You have a very Good Idea).  I am going to clearly express in My ‘Alternate Resolution Proposal’ exactly what it is I would have been as King of the Salvation Army for in lieu of financial compensation before I was compelled to bring them before the Court.  If the Salvation Army still Wishes to ignore My alternate resolution proposal, I am thing King the Justice Will have no problem awarding Me $537,000.00 in stead, just for being so reckless and arrogant…  We Will soon see!

Anyway, I thought I should let You know I am back and War King hard to defend the Common Law rights of Canada’s People.  Now You all know how to fill out a couple of Court Forms by Hand should You ever Wish to file a Statement of Claim.

I hope You’ve all had a fabulous week, thank King You for being here!