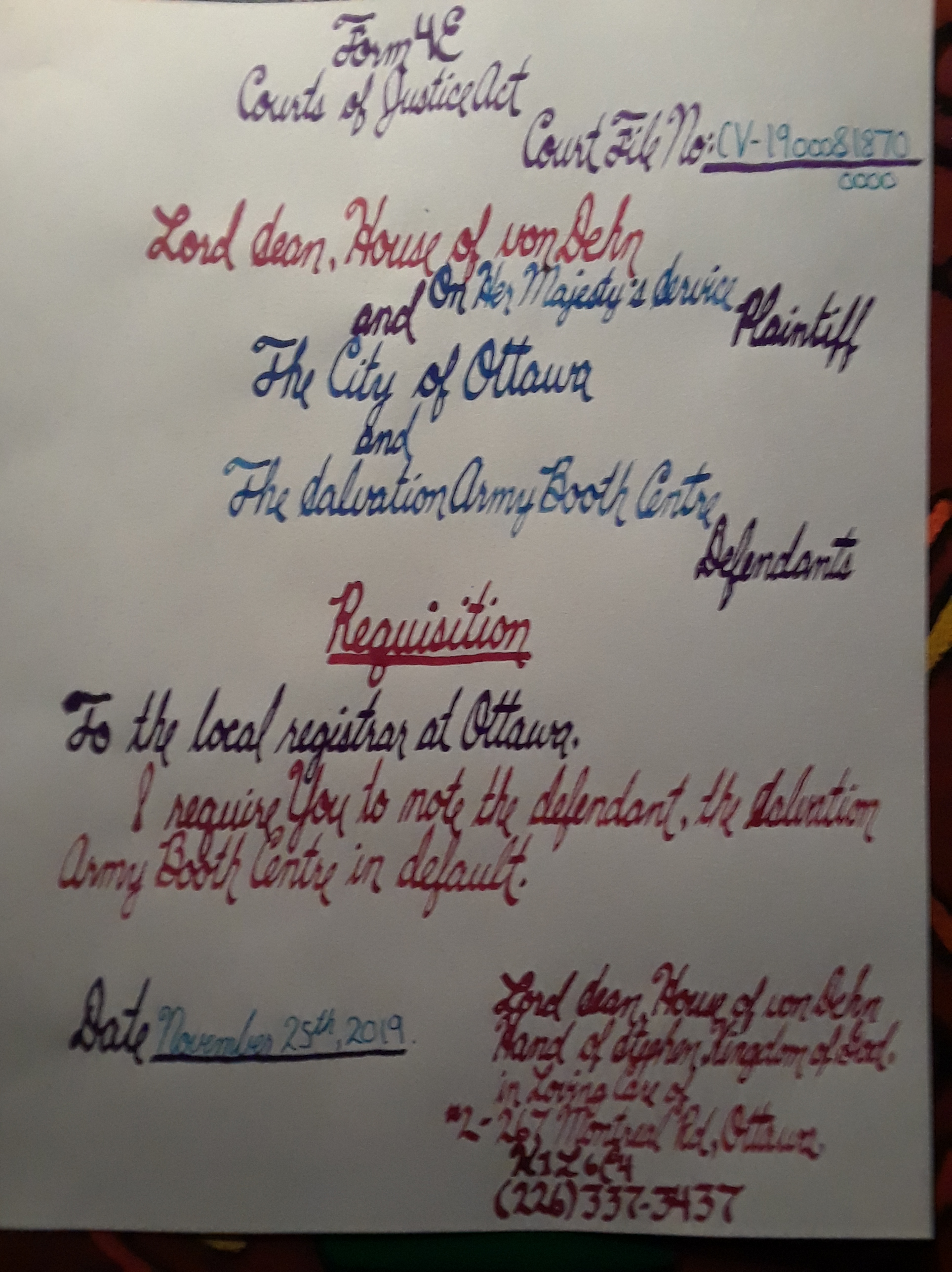 Hello every One, and welcome to the Super Natural Sunday Re-View, thank King You for joining Me, I have a very exciting edition today, as the Salvation Army is now in default!

Yes, the Tower Card from Our recent Tarot read comes to Mind, as I had mentioned it represents the Salvation Army in My Microcosm.  Failing to respond to Statement of Claim is about the worst thing One can do.  Why is being noted in default so dangerous?  Well, let’s see what the Rules of Civil Procedure has to say:

(a) is deemed to admit the truth of all allegations of fact made in the statement of claim; and

(b) shall not deliver a statement of defence or take any other step in the action, other than a motion to set aside the noting of default or any judgment obtained by reason of the default, except with leave of the court or the consent of the plaintiff.  R.R.O. 1990, Reg. 194, r. 19.02 (1).

The Salvation Army has lost their opportunity to defend against any future Actions I may choose to take and have deemed all the Statements of My Claim to be a factual account of events.  Needless to say, this is about the best possible outcome for Me at the moment, and it Will not be terrible for the city of Ottawa, either, depending on how the city Wishes to proceed.  It Will make it considerably more difficult for the city to dispute any of My Claims, though the city can now hold the Salvation Army liable for the harm that was done to Me.

Today’s featured photo is Form 4E from the Rules of Civil Procedure, which I Will be filing with the Court first thing tomorrow morning.  Proof of service is also required to note a defendant in default, but I filed My Affidavit of Service on November 6th, so in this particular instance, it is already done.

I suppose I should also point out that noting the defendant in default is not the end of the Matter, either.  Noting the defendant in default is not a default judgment.  Another Court Form is required to requisition the Judge or Justice to award a default judgment, though removing One’s adversary of their ability to defend against the motion dramatically increases the potential for the Justice to award the default judgment the plaintiff is seeking; if there is no One there to defend against the Action, it is that much more likely to succeed.

This really makes things very interesting.  I had no Idea how the Salvation Army would attempt to defend themselves anyway because the information in My Claim is true and I have substantial evidence to support the majority (if not all) of My Claims.  Now that the Salvation Army is in default, it strengthens My Claim as the city of Ottawa Will have no first hand knowledge of the events to dispute any of the facts; and My Claims against the Salvation Army are no longer in dispute, they are now considered fact by the Court.  None can dispute the harm that was done, I believe the only thing the city of Ottawa could now contest Will be the measure of liability and the amount I am as King for in compensation.

Good for Me, Good for the city of Ottawa.

The other reason being noted in default is probably the worst thing One can do, is it is considered dis-Honourable and Will be ‘frowned upon’ by the Court.  Even if One is guilty on all counts, the Honourable thing to do is to respond, show remorse, regret, compassion and empathy for One’s wrongful Act.  Failing to respond also happens to support My Claim that the Salvation Army has no respect for the Law or the dignity and worth of their clients.  This is NOT going to look Good for the Salvation Army when this comes before the Court.

Needless to say, I am ecstatic about this.  Not in a million years did I actually believe the Salvation Army would make such a tragic error, even after witnessing their lack of regard for the Law first hand for over seventeen months.  This still blows My Mind.  This is an example of exactly what One should not do when served with a Statement of Claim.

I hope this weekend has been as Good to all of You as it has been to Me.