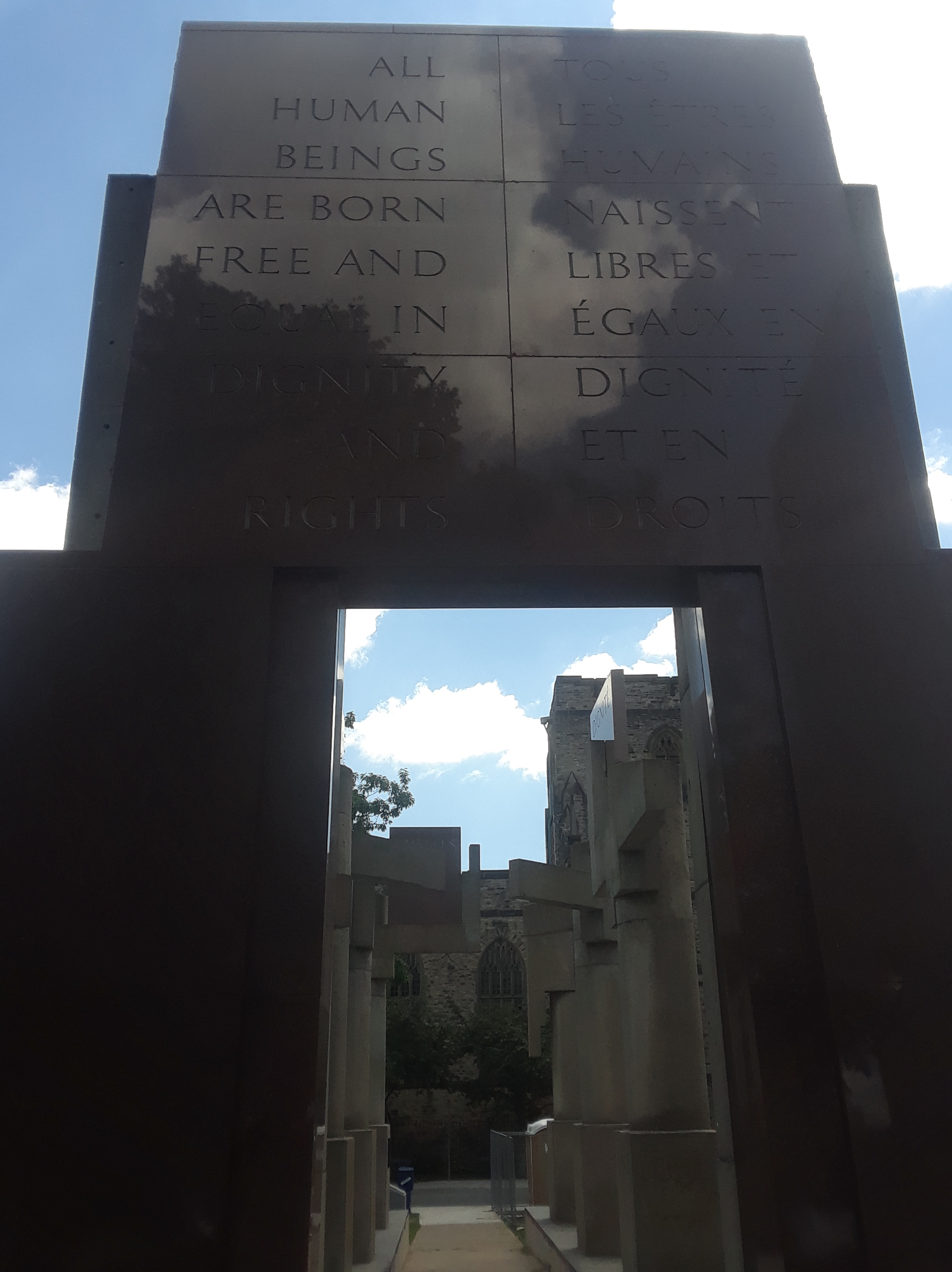 Hello every One, Hope and Trust You are all enjoying a Wonder full weekend, thank King You for joining Me.  Today I Will be briefly reviewing the events of the last week which was reasonably quiet, hence the title of today’s Post.  This is the Good News Journal and today, no news is Good News.

Today’s featured photo was taken downtown Ottawa just beside the courthouse, it is a tribute to human rights.

Tribute; definition: an act, statement, or gift that is intended to show gratitude, respect, or admiration.

So presumably this tribute is to show gratitude, respect and admiration for human rights.  Personally, I don’t like the term ‘human’ rights, and if One knew the legal definition of ‘human’ they would know why.  However, most of Us comprehend the Word human to mean Mankind, so that is how it Shall be commonly interpreted.  The use of ALL CAPITALS once again reflects the legal fiction for incorporated persons.  However, this is still Good otherwise those who have accepted the status of person would have no recourse for their rights.  This reflects the fact that these rights apply to the incorporated person, the Canadian citizen. 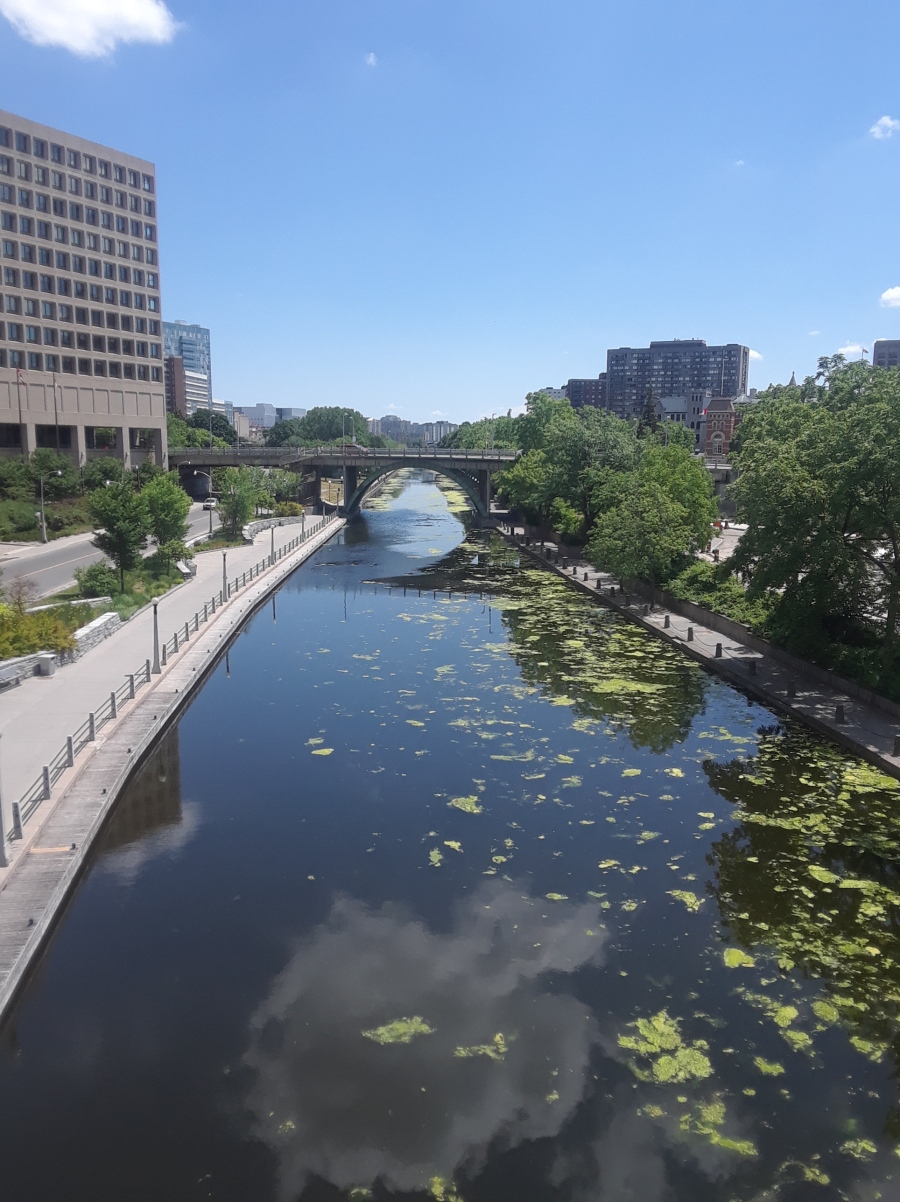 And I just thought this was a beautiful view of the Rideau Canal despite the numerous algae blooms.  It was 34 degrees Celsius today (roughly 90 or so Fahrenheit), so the warm weather Will be a factor.  Otherwise, still looks pretty desolate for the Rideau Canal on a hot Saturday afternoon.  Normally, both sides of this walkway would be littered with foot traffic and bicycles.  Today, not a soul in sight.

Thankfully, there were considerably more People out and about compared to a month ago.  There were quite a few People in Federation Park chilling out on benches, walking through, or sunning on the grass somewhere, that was really Good to see, too.  Last time I passed through Federation Park One was not allowed to sit down on benches or lay in the sun, it was walk-through traffic only.  Ridiculous.

Anyway, the silence of the scene above reminded Me of the silence in My Microcosm.  I don’t really Mind it so much now, though there was a time I once did.  I’ve grown accustomed to People failing to respond to My Letters and now I perceive those Letters to be Victorious.  Silence is consent and an undisputed claim stands as fact in law, so it is all war King to My benefit.

I believe My Letter to Justice Susan J. Woodley would have been received on Thursday.  Though I have heard no official Word yet, My brother has revoked his consent to My sister’s application for estate trustee, and tells Me he believes My sister has withdrawn her application.  Unfortunately, he does not Wish to discuss the Matter with Me at all, so I have no more information than that as I am trying to salvage relations with My brother and respect his Wishes.

This is an example of the ‘sound’ of silence.  No Word on the reception of My Letter, yet the Spells Cast into the Letter appear to be war King their Magic in My Microcosm.  The same is True of the last two Letters I sent to the city of Ottawa and Ontario Works.  The city of Ottawa did not respond to My Letter or acknowledge the $10,800 money Order I Presented to them, though renewal of My subsidy was approved without Issue or compliance to any ridiculous conditions that trespass upon My Sovereignty – and that was the Intent of the Letter and the money order, so mission accomplished.  Ontario Works insisted they still need a doctor’s signature to approve the dietary medical allowance benefit indefinitely, though ‘due to covid’, they are able to approve My request for at least the next six months (as of June 1st).  Keep in Mind, I was approved for a medical condition I added to the form My Self (hyper metabolic rate is how I believe I expressed My ‘condition’).  Ontario Works (Anne Charette) has not responded to My emails yet and My belief is that they are hoping by Honouring My request for special dietary allowance I Will be less likely to follow up with Anne regarding the dissolution of the Trust.  They are wrong, but that’s okay.  I have not received a reply from My last email so My next Letter to Anne Charette Will be a formal Letter of Service.

The exception to the rule so far is Ottawa Hydro and they are being especially dis-Honourable by ‘pretending’ they are not receiving My mail.  I can Give the benefit of the doubt on the first delivery, but I do not believe that My last package was not delivered.  I said I Will Show You how I Will deal with that and what to do with People who Wish to proceed this Way and I Promise You I Will.  I Will be war King on a new Letter and package to send to Ottawa Hydro for the end of this month and this time I Will be sending the package registered mail so they are compelled to Sign for delivery.  I’m not playing games with them or any One else any more, People who do not Act in Honour Will be made accountable to Me.

The Characteristic of the “Prince of Wands” (which is My ‘identifier’ in the Thoth tarot deck) that I like the least is also one I felt did not apply to Me – I perceived it to be the only exception to the characteristics of the Prince of Wands, and that was the Idea that My name alone would be enough to invoke fear in People.  I could not understand how this could ever be True because I really don’t have a malicious bone in My body.  I Wish for justice, but not revenge.  I would not do onto any One else anything I would not Wish done to Me, and that includes ridiculous prison time or unfair treatment in the justice system.  I would like every police officer who has ever placed Me in a holding cell to spend one full twenty four hour period in a cell without any One in the facility knowing the individual is a cop just so they have an Idea what kind of torture they have subject others to.

Alright, I think that’s it for My Sound of Silence Super Natural Sunday Edition!  Not a lot of Action this last week, though I anticipate I Will have more exciting News very early in the new week.

I hope You are all enjoying some sunshine and soaking up some vitamin D.  Enjoy the summer while it lasts!!!