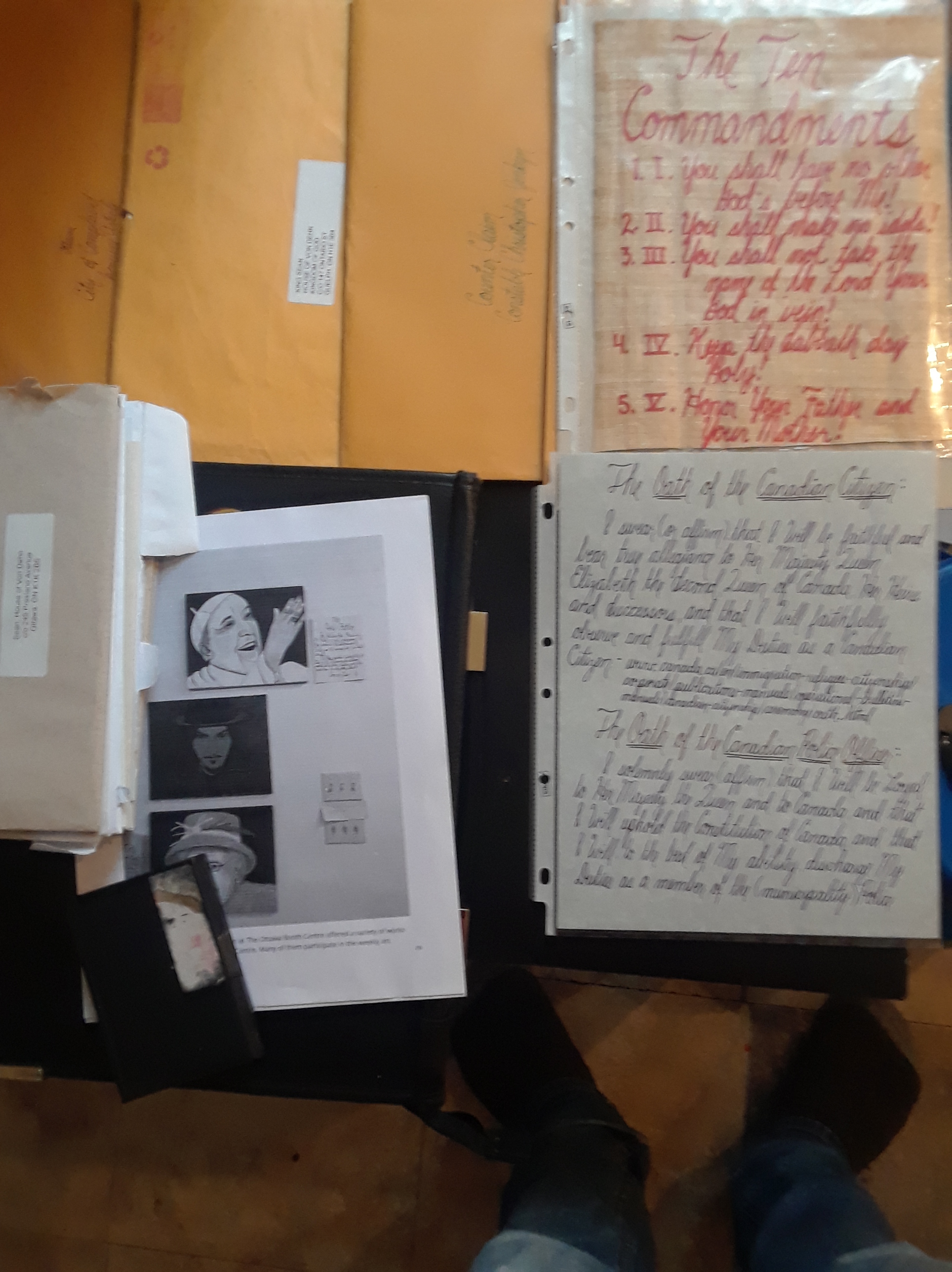 Hello every One, and welcome to the Fabulous Free Lance Friday Edition of the Good News Journal, thank King You for being here.  My Word, ‘Sean’s Word’ is My S-Word, and Fabulous Free Lance Friday is My favourite day for Writing because I wield My Sword fearlessly.  Today’s photo features a Grand collection of Spells that have Cast Characters into My Story, and We are still waiting patiently for the effects of My Magic to be fully activated.  I also felt today’s feature photo is a Good example of the Power and permanence of the Written Word, as even though many of these Spells may not seem to have any immediate effect, each contributes the Foundation of God’s Kingdom and makes the King’s Keep that much more secure.  Over time, the effect is like an invisible suit of armor dressing the King’s Character.  This is why Keeping the Original Spells well organized is so important.

It is the central Character pictured above We are developing the armor for.  The Prince of Disks represents the Prince of the material world, the commercial character.  This Character is influenced by the Prince of Wands which is My ‘identifier’ Card in the Thoth Tarot, the Card that represents My True [Spiritual] Purpose as determined by God.  My Duty and responsibility, is to ensure the commercial Character reflects My Will.  The other Card influencing the Prince of Disks is Love and there is a great deal more Significance to this than might first meet the eye.

Love is the 2 of Cups.  I have suggested that in Magic, 2 is a Door [II].  I have also suggested that the Age of Pisces represents the Age of Commercial Admiralty law, as We have all been Given commercial [citizen] Ships to Sale/Sail the Holy See/Sea of commerce.  Even more Significant, is that Cups represent water and emotion, so the 2 of Cups indicates that the Commercial Character is influenced by Love.  This also reflects the Intention of Man’s commercial admiralty system of law, what I commonly refer to as Man’s legal fiction or Matrix.

By Giving the commercial Character Created by the state a Living Will, One is effectively both raising the dead (Giving Life to the dead fiction), and razing the dead because it no longer represents a corporate [dead] entity, but the Living Will of God.  This transforms the citizen Ship into a King Ship and now the Character is walking on water, rather than sailing (sale-ing/selling) for false profits.  Does it not say somewhere that We are to Live in King Ship [kinship] with one another?

Ah, but all this is probably just a coincidence, right?  I just happen to be a clever Word Smith (Agent Smith)?  Well, I Wish I could take credit but the Masters of Magic who designed Your world are responsible for the perfection of Man’s Matrix; I’m just the messenger.  Their intention, however, was to make this Fun for People to figure out.  I told You God has a sense of humour.  Everything is right there in front of Us for those with real eyes [realize] to see the sea of commercial admiralty waters.

Well, that was Fun but I did go off on a bit of a tangent – that’s kind of the Idea for Free Lance Friday, so that’s okay.  What I really Wished to be tall King about today is the commotion in My Microcosm.  There is still no Word on My Letter to Justice Susan J. Woodley, though I’m not too concerned because the Purpose of Casting that Spell has already been accomplished – or at least, I Trust it has.  My brother rescinded his consent to My sister’s application and he believes My sister withdrew her application.  I have no reason not to Trust My brother, he is not Willfully deceptive.  If My sister did not withdraw her application, she Will have said something to My brother to make him believe she intended to.  I have still not received any formal confirmation which is more than a little strange.  Perhaps that Will not be the case by the end of Friday, as that is when I am expecting to hear something.  However, it has had some kind of ‘Magical’ effect in My Microcosm beyond My brother rescinding his consent.

One of the characteristics of Living a Spiritual Life is Trusting One’s intuition.  I’m almost never wrong when I have a feeling about something.  There is something wrong with My family and I cannot put My finger on what it is.  I know My brother is struggling with this because he told Me and that’s not unusual for My brother because he is a very caring individual; I suppose what some People might call an em-path.  I share similar Characteristics.  I can’t watch war movies, for example, it makes Me sick to My stomach to see People Willfully killing each other.  My brother gets more upset that the average individual would if there is disharmony among People he cares about.  So I know the family conflict regarding My father’s estate took a toll on My brother but he rescinded his consent to My sister’s application to absolve him Self of that in some Way – it isn’t war King.

Ever since My brother messaged Me to Give Me what should be Good News for Me, My intuition has been telling Me something is very wrong; not just with My brother, but with My mother and sister, too.  If My sister did withdraw her application and hasn’t bothered to tell Me, it further demonstrates how childish and irresponsible she’s behaving.  I can’t help wondering if she did and is now angry with My brother because she paid so much out in legal fees.  On the other hand, maybe she was so angry about how much she’s paid out in legal fees, she’s still trying to figure out if there is some Way she can win.  I really don’t know and I don’t like not knowing because someone Will have to administrate the estate.  So if My sister has withdrawn her application, she needs to tell Me and I need to be able to have an adult conversation with My brother and sister about what Will happen next.  Not an easy thing to do when every One is so easily offended.

I hope You are all well, staying healthy and enjoying the summer and sunshine.