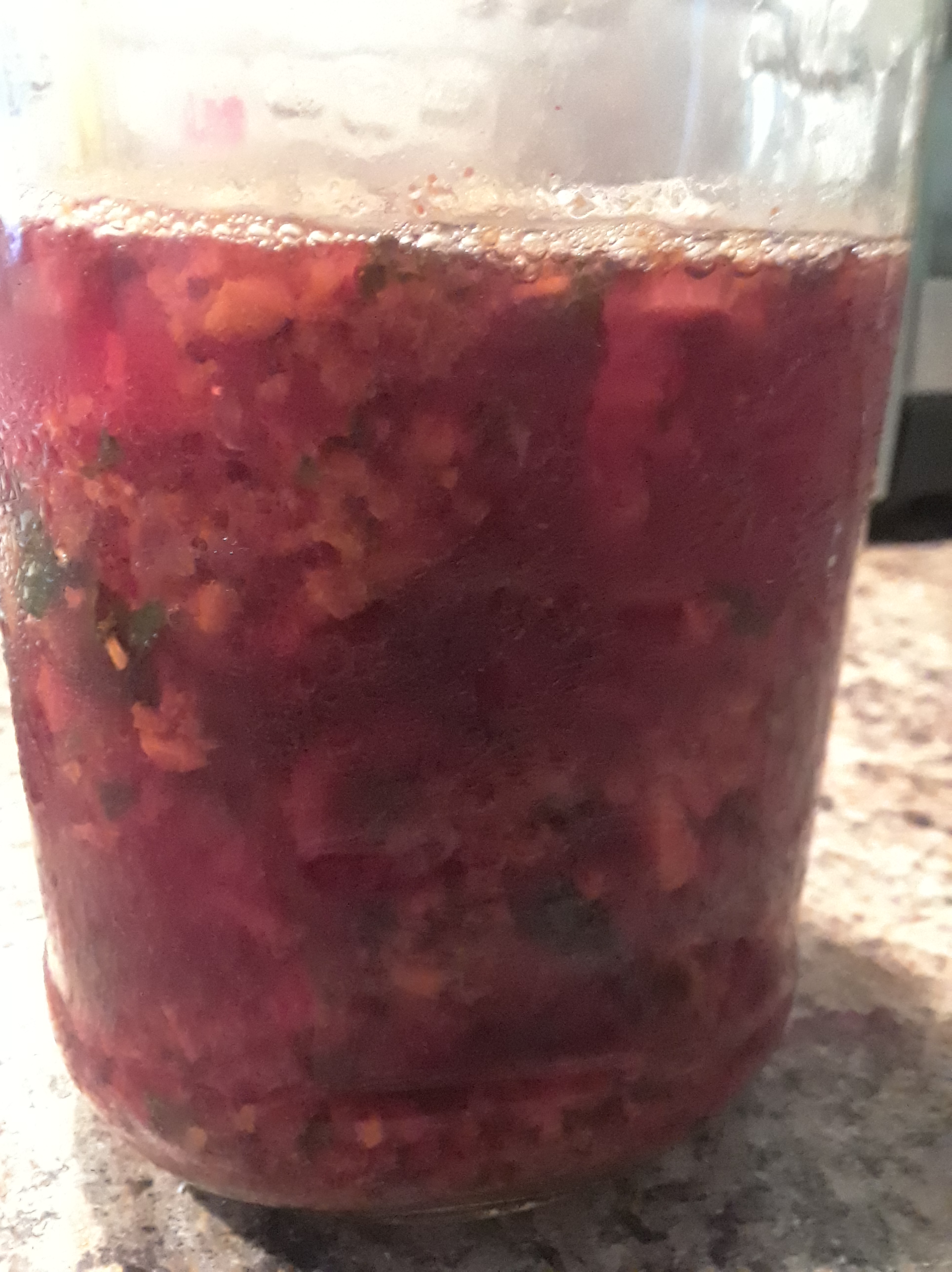 Hello every One, and welcome to the Good News Journal’s Sensei Sean All ‘Simple Solutions’ Saturday Edition, thank King You for joining Me; as always Your Presents are a Gift.  Today’s featured photo is My Self health inspired killer immunity defense concoction in the third of Four Stages of chemistry processes before it Will be ready for consumption.  It’s also just one of many random projects that have been keeping Me busy lately, a Great deal of which has been inspired by My thirty-day challenge last month to dedicate one hour to Art daily.  I have something of a natural ‘entrepreneurial’ Spirit, which I decided would make for a Good thing to be tall King about today because I believe the Way of the future Will allow for all of Man to fulfill Man’s Purpose both individually and collectively, which Will mean identifying some of Our own unique Gifts to Present to the world.

The featured photo is an evolution of a supplemental health tonic I created once before several years ago.  Sometimes I have an uncanny memory for things, this recipe was one of those times.  Another was My father’s phone number which was only ever told to Me once when I was in My very late teens.  I don’t know if I even used the number more than once but I Will probably remember it until the day I leave this world.  The evolution of the tonic includes diced carrots and beetroot which Gives it a really nice reddish purple colour – the ‘traditional’ tonic is a deep, muddy brown.  The colour Will change as it processes, though I believe the red Will remain and perhaps just get deeper.

Okay, so what is it!?  It is 300 ml of apple cider vinegar.  I used an ice cube try to determine how much water it holds, then filled a jar with equal measure to that of a full ice cube tray (300 ml).  The ice cube tray was then filled with a mixture of the following ingredients, as finely chopped as possible.

My additions to this recipe are beets, carrots, and a few sprigs of cilantro.  Essentially each of the ingredients should be more or less in equal measure to the rest.  What is the purpose of all this?  Well, apple cider vinegar is Good for a lot of things in its own right, neutralizing and maintaining healthy body acidity levels.  One or two shots (30-60 ml) of apple cider vinegar a day is a daily ph maintenance habit.  All of the ingredients on the list above have some kind of super immunity health boosting properties.  The acid concentration of the apple cider vinegar is very strong and Will eat through all of the cell walls of the organic compounds releasing the nutrients and beneficial properties into the apple cider vinegar.  It sits for two weeks to fully allow for the organic matter to completely break down.  I Will strain the organic matter, refreeze it, then return it to the vinegar for another week before repeating one last time and allowing to sit for a final week.  By freezing the organic Matter, freezing further destroys the cell walls of the plant Matter making it more susceptible to the osmosis of nutrients into the vinegar.

The hotter the spice, the more deadly it is rumoured to be in its ability to fend against unwanted infections.  The last time I made this was when I was living in Guelph and I initially didn’t tell anyone about it, I just did it for Me.  But a couple of My Friends found out about it and Wished to Give it a try.  Maybe it was just psychological because the effects were too quick to be from the tonic, but I guarantee it wakes One up in a Way coffee never can!!!  One of My Friends was trying to convince Me I should sell it, and I joked about how maybe one day I Will, I’ll call it, “Bad Ass Buddha Tonic”, and I’ll have three levels of heat from mild, to medium, to liquid lava love.

All the organic Matter is strained from the liquid when ready for consumption.  The Idea is to roll it around the mouth for thirty seconds before swallowing.  There are all kinds of mucous membranes in the mouth that allow for the uptake of nutrients and apparently allowing all these veggies to ‘pre-digest’ in apple cider vinegar for a couple of weeks allows nutrient uptake almost instantly.  Then, swallow it down.  You may Wish to be outdoors on Your first experience because One Will usually Wish to yell after consumption.  As far as the taste is concerned, there is no real comparison except (really) strong alcohol, especially the really hot stuff.  I had a Habanero version the first time.

The Significance of this Simple Solutions Saturday Edition is that I have all kinds of little Ideas like this.  Sales used to be one of My main gigs when I was in the game, I have always Loved the Idea of Entrepreneur-Ship.  Interestingly enough, one of the success stories in one of those books on how to be a successful entrepreneur was a story of a man who bought the very same type of miniature Crassula ovata (Jade plant) at a market vendor selling them for $2.00 a piece.  He figured if he could turn it into a million and sell them all for half that price, he’d be a millionaire.  Tells the story of how he made it happen, which is exactly what I just happened to do with My first Crassula ovata.  If the leaves I’m propagating sprout too, I Will have produced 25 additional plants from one ten dollar plant.  The difference of course, is continuing with the very same principal using the most productive and aggressive reproduction strategy.  I can’t remember how long it took the guy in the example to make his million but of course he didn’t wait until he had a million plants to start selling them.  I know he had hundreds on the go within a few months, always holding back a percentage that would be used later to create new clones and new mothers.

For Me, the problem with any of these Ideas is that I’m not interested in making millions of dollars, I’m interested in improving the world.  The ‘Simple Solution’ for Me on a personal level, is the freedom to have the financial resources at My disposal to do these things so I can share them with You.  I would love to grow a ton of Crassula ovata but there is really no point propagating any more, I don’t Imagine I Will ever need more than twenty-five of them and Will likely end up Giving away a number of the ones I’m growing now once they get a little larger (and My plant collection gets a little more interesting).  I would not Wish to be compelled to do anything for the rest of My Life to ensure I can live a healthy, productive Life.  I’m glad I shared My plant butchering experiment with You, and I’m pleased it happened to work out so well.  Could I potentially propagate and sell these at such an alarming rate I could make millions?  Of course, any One could if they have the right Mind set, social skills and marketing strategy.  The Magical Man can always sell Lucky stones to the unlucky Man.  Better to Give a Man Gold.

I would do all kinds of interesting things I would share with the world here if I just had the freedom to do as I Wish.  I would absolutely breed fish again, it’s another natural Gift; I have an uncanny Way of identifying the sex of fish often determined to be impossible to sex by physical appearance, and could usually have a new pair breeding within two weeks.  When I lived in BC, I had fry to trade for fish so often I could always get interesting new breeds of fish to try, and because they knew I was breeding the fish, they would tell Me which fish were from which breeders so I was sure to not buy from the same strain (sometimes had wild caught, too).  It’s a very interesting hobby, the fish are beautiful (something very zen about fish), and apparently some of the varieties I was breeding were supposed to be very difficult.  I never had issues with anything I Wished to breed and the fry I produced were even more spectacular than their parents.

I believe We do have a duty and responsibility to contribute to society, and I believe sharing Ideas like this has incredible Value to society as a whole.  Consider how much information is out there on blogs alone?  Even the mainstream newspapers are technically a blog, I know the Ottawa Citizen uses WordPress, too.  Give a Man a fish One feeds the Man for a day.  Give a Man a fish, One feeds a Man for Life.

I’m not interested in turning any of these Ideas into any kind of entrepreneurial venture but I am interested in sharing them with You.  In the future, I do hope to have the budget to accommodate a lot more Artistic and creative efforts.  One of the things I Will be tall King about in the Super Natural Sun Day Edition is the Power of Vision boards and Wish Lists for bringing Magic to Life.

I hope You all had a Sensational Saturday!!!