Hello every One, welcome to the Terrific Two’s Day Edition of the Good News Journal, thank King You for being here.  It is a Terrific Two’s day despite the fact that I did not get a Blog Post Writ yesterday for the first time in over three months.  I was busy with other things and kept insisting I would Write My Post after so that I could Show some of the Magical Crafts I am war King on.  My more serious work is out of the Way for now, this is Fun Magic.

Pictured below is a Sacred geometric paper Pyramid, exact scale to that of the Giza Pyramid in Egypt.  I still have this Idea for creating pyramid shaped plant pots, just because I am not tall King about it does not mean the Idea has disappeared, it is still war King its Magic in the background of My conscience.  In My last efforts (which a raccoon has partially destroyed), I discovered that the Egyptian’s understanding of Sacred geometry actually makes creating a blueprint for a perfect geometric pyramid relatively easy.  The Secret of the Sacred Circle; 360 Degrees; 360=3+6+0=9.  9 is the Trick, remember, it’s just 6 upside down.  6 is the Secret of the Sacred geometry of the Giza Pyramid.  Let Me Show You what I mean, as this was one Creative Project yesterday. 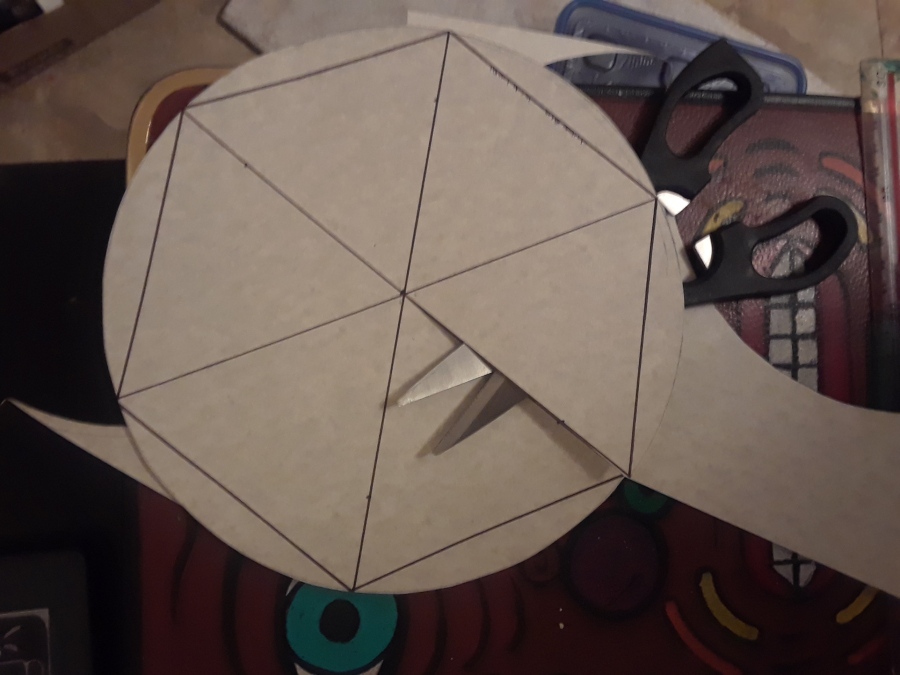 I had been Visualizing all of these Ideas in My Mind, now was the time to put them to the test and I Will explain the Motive A Sean behind this project later in the Post.  All four sides of the pyramid are perfect triangles, all three sides equal (isosceles, maybe?  or equilateral?).  Haha, turns out both are correct, though isosceles is more accurate, the other only means two sides are equal.  Crazy I can remember any of that from high school, that would have been the last time I remember using it.  Anyway, what I am about to Show You I Visualized entirely in My Mind, first.  Turns out it was a pretty Good Idea. 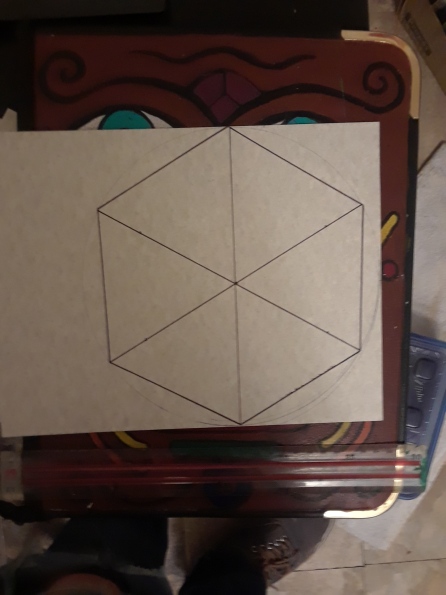 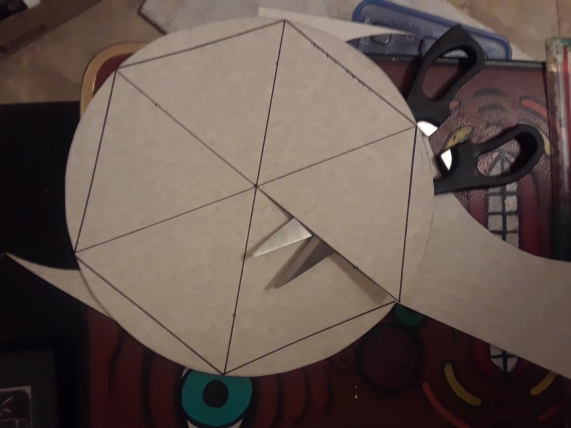 The little extra bit left over at the bottom of each triangle is folded underneath to stabilize the base.  I used all purpose paper/wood glue to seal the edges together.  This time, I’m going to try re-purposing a plastic bag to line the inside filled with earth before I configure a bottom for it.  Then, I’ll cut a hole in the very top just big enough to water, (and for the seed I Wish to plant), and I’ll only need to punch holes in the bottom for drainage.  I’ve got other Ideas, too, but that’s how I Plan to put this blueprint to use for My Self and My plant collection.

But that’s not the only Magic I was up to yesterday.  I have never made guacamole from scratch but I love the stuff, though its one of those things One never really thinks of until it’s in front of them.  Well, I saw a container of guacamole in the store and thought it would be amazing on cheese bread but it was a tiny container for a ridiculous price.  I decided to make My own, I only needed to pick up cilantro for the recipe.

Make sure the cilantro, peppers, onion and garlic are super finely chopped.  One could probably even blend them if they Wish. Same goes for the tomatoes, though some People like to leave the tomato just a little less finely chopped to add texture.  All seeds are also removed from the chili peppers.  Leaving them in Will affect both the heat of the guacamole’s spice level and the texture (who Wishes to eat seeds in their guacamole?). 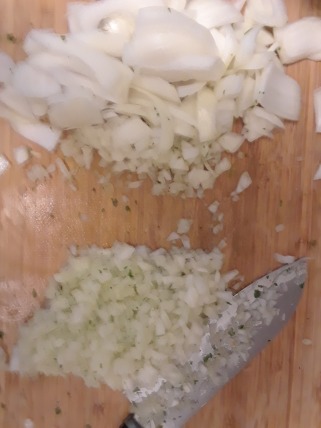 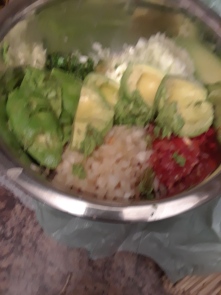 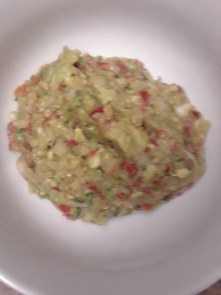 Okay, so one major ingredient I forgot was black pepper.  There should be a Good tablespoon at least, as much as two depending on taste.  This was amazing!  However, there is room for improvement.  I had a lemon already, so I tried a lemon instead of traditional lime and it is suggested in some recipes.  This recipe would be better with lime instead of lemon and I could personally stand more peppers or hotter peppers, otherwise the texture and taste was outstanding.

These cheese buns were warmed in the oven first, then My Sandwich (Witch) Fantasy was made Manifest.  Mmm…  So Good.

But, the day didn’t stop there.  I save seeds from virtually everything, so the avocado seeds were no exception.  I can have up to three new plants happening in six weeks or so, and avocado plants are quite Visually impressive house specimens even if they never bare fruit.  So I decided to make the project more Fun by painting the seeds.

So, what’s really going on here?  Well, Truth be told I’m just a big little kid who Loves little creative projects and have a fascination with plants, especially growing things from seed.  I am also thing King about how Fun it would be to do these projects with children and how much Fun it might be for My niece and nephews.  I discovered Canada Post sells boxes that don’t go by weight – whatever You can fit inside the box ships!  I am trying to think of some Fun things I can send to My nieces and nephews next month.  So far, they Will receive three pyramid blueprints with instructions on how to put them together and three avocado seeds painted specifically for each of them with holes already punched and spears ready to go.  I’m also going to include a little fantasy legend about the seeds being from a Magical tree known as the Dragon Tree, the seeds are Called Dragon eggs and they hatch if suspended over water for a few weeks but must be tended to carefully.  I think they Will like it a lot and I am thing King My brother Will approve.  This is in addition to three colouring pages they Will receive, one side coloured by Me, another side free to colour for them.

And despite all of this busy activity yesterday which made Me very excited to sit down and Write a Post to share all of My Good News with You last night, Gigi came home after having a run in with the neighbourhood skunk.  She’s seen him before, I told her “NO!  Leave it alone”, she listened.  Until I was not around to tell her not to, apparently. 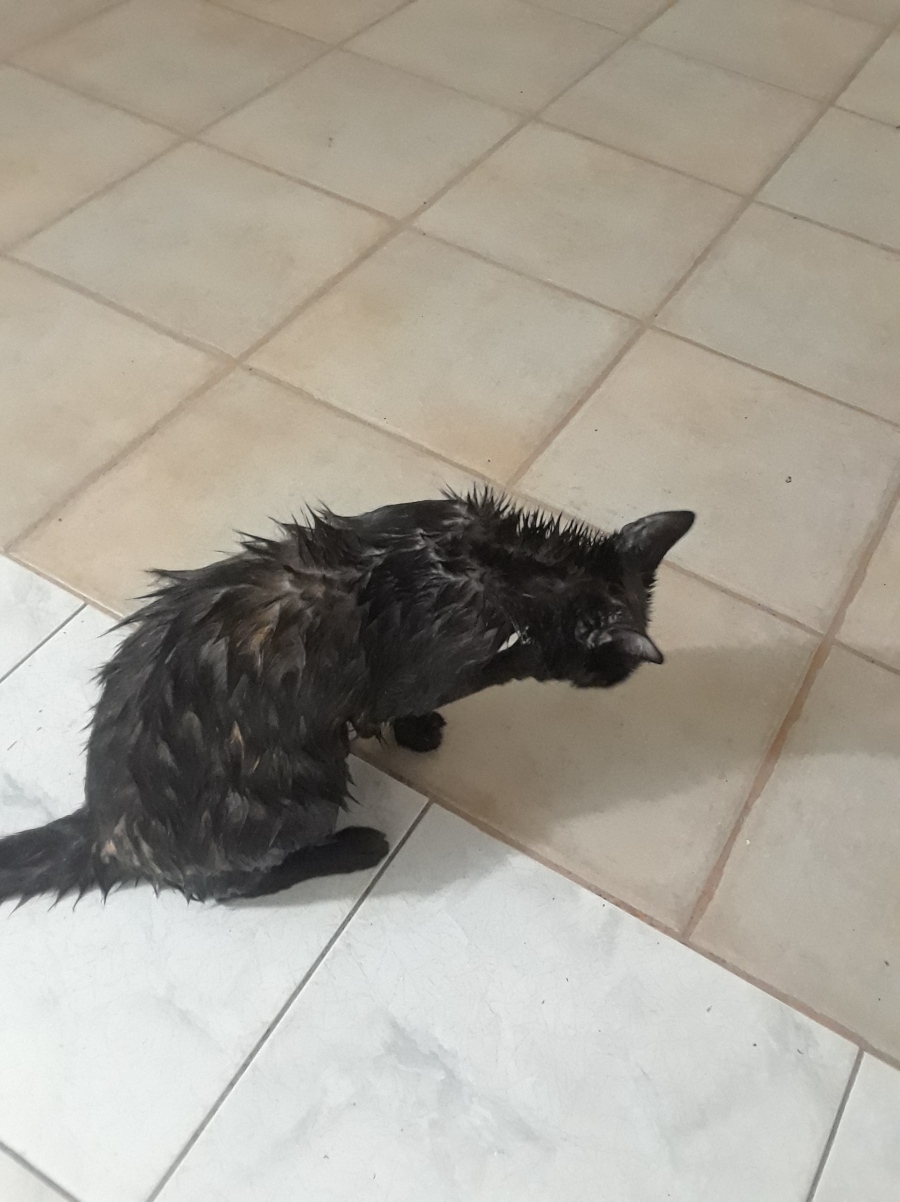 On the upside, I tried to bathe her once before and she was not having it.  This time, it was like she knew she stank and didn’t know what to do about it.  She seemed as sad and defeated as she looks in the photo above.  She did splay her claws and clutch each side of My chest with them fiercely as I held the scruff of her neck in the kitchen sink and used My other hand to gently wash her with dish soap and baking soda.  Unfortunately, the worst part is the top of her head and she was only putting up with Me because I hadn’t got her face wet yet.  I looked at her dead pan in the eyes, “Don’t hate Me, We need to do this, Your head is going under the tap for a moment, be tough!”

I ripped her away from My chest before she had a chance to comprehend what I might be telling her but that was the final straw, though she was Good enough for long enough to get her head wet, soaped up, and rinsed before she finally escaped the sink.  Then it was truly a moment to Savour as I held up the towel and looked at her, scoffing at Me, “So, You want this nice big fluffy towel, or You Wish to scowl and be angry with Me for the rest of the evening?”

She looks at Me like she hates Me and Loves all at once.  She knows I know she can’t resist the towel, and she knows I know how angry she is with Me.  But the towel wins and soon she is between My legs, purring and getting toweled off.

So that’s My excuse for not Writing yesterday.  Told You it was a Good one!!!