Hello every One, and welcome (finally) to Part VI of My V for Vendetta Re-Viewed series, thank King You for being here.

The detectives and police finally break into the control room of the television station to discover V has placed Guy Fawkes masks on all the hostages, though not before a police officer shoots one believing the Man to be V.  It is Fun for Me to re-View because I had forgot how V manages to get away.  Hard to believe I could forget… 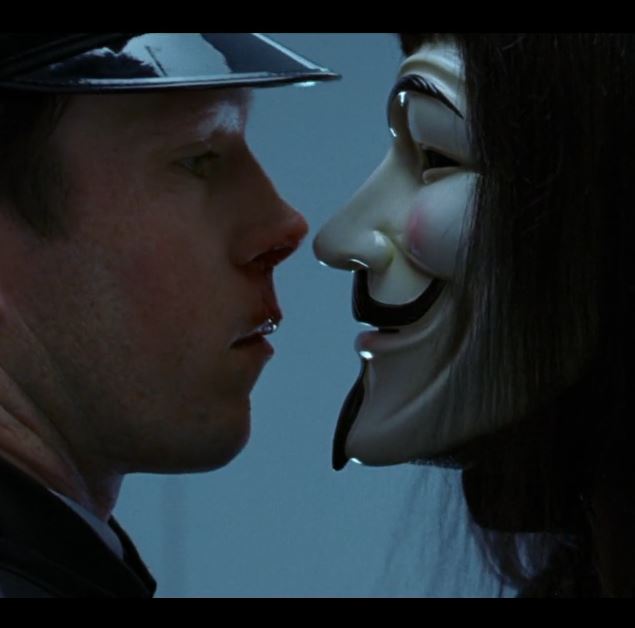 Once again, in typical comic book fashion, V easily compromises a unit of five police officers guarding the elevator.  He has seemingly superhuman strength and speed, and We are not sure why at this point.  He is merciless with law enforcement but seems to have some compassion for his hostages, harming none with the exception of the man shot by police.  It is worth noting that this movie is very much about paying Our ‘karmic’ dues, so it is not a coincidence that We see V brutalizing five police officers shortly after police mistakenly shoot a civilian.

At the same time, a detective and his partner are war King to dismantle a bomb V left in the control room.  My personal belief is that the bomb is a fake, though there is no conclusive evidence to support My Idea.  My theory is that it was used as a decoy to Give V more time, and the police something else to worry about.  There is an indication that the man working on the bomb has no Idea what he’s doing and cuts the wire on nothing more than a ‘hunch’.  This is why I believe it was fake, I don’t think it would have Mattered which wire was cut because I don’t believe V would ever do anything that would genuinely place civilians in serious harm.  Remember, the ‘Old Bailey’ at the beginning was empty and no One was harmed by the explosion.

The next scene cuts to Evey making her Way out of the building only to encounter ‘V’ a few steps ahead of her.  I have suggested as well that V is Evey’s brother, though the police records say V died in hospital.  The next scene lends support to this Idea.

Evey ducks into a room to hide from V just as the detective who disarmed the bomb appears from behind V, telling him to ‘Freeze!’.

The detective is almost a safe distance away (if V were a ‘normal’ adversary), but V can’t see how far away the detective is and knows there is a gun on him.  The situation is looking pretty dismal, We get a sense that V understands the futility of his position.  V turns around slowly, hands raised on his head, commending the work of ‘Britain’s finest’ on their swift response time.

“Oh, I don’t know about that” replies V

We can see Evey’s hand tapping the shoulder of the detective, and when he turns around, she maces him in the face which is more than enough time for V to jump into action and compromise the detective, though not before the detective punches Evey in the face, knocking her unconscious.

The next scene cuts to the evening news, which Gives ‘their’ version of the terrorist attack, claiming that V used high powered weapons and explosives to harm unarmed civilians to deliver a message of terror.  We see that the People watching the news skew their eyes, some start laughing – they are beginning to realize the media Will spin the Truth to fit their narrative, much like the CBC network in Canada these days, terrorizing the People with fear of a virtually harmless virus, while attacking the character of any individual who does not comply with draconian orders contrary to common sense (like mandated masks).  The only time the government has any Power, is when the People are Living in fear and looking to government for protection.  So the best strategy for government, is to Keep the People in fear with sensationalized news stories.

They do such a Good job of emulating modern day mainstream media in this film, they really do.  The news story has obviously fake video coverage of the event they claim was taken ‘live on the scene’.  They even show their own officer shooting a civilian, claiming the officer to be a hero who has compromised the terrorist they now have in custody!  I’m telling You, it’s almost exactly like watching CBC these days!  (Except not funny, I am so enraged with CBC I cannot watch them anymore, they should just call themselves the propaganda network for those paralyzed with fear.  And all because Trudeau bribed them with $600 million of the People’s money (treason).)  Way to go, Trudeau.  Like father, like son…

I digress, though this is Part of the reason this film is so important right now.  It takes place in 2020 and is so prophetic, it is more than just a little ‘eerie’. 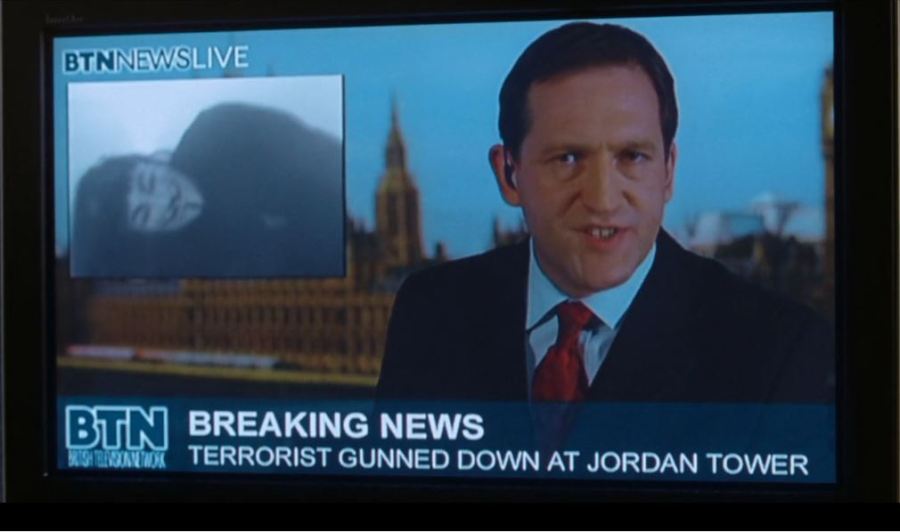 So Our hero Vigilante V is still missing in Action, though the government claims to have the situation under control.  I’m going to chime out soon for this edition, though I Wish to say that this is also an important element of government.  Not only do they need to Keep People in fear to control them, they Will lose that control if it appears the government is incapable of ensuring their safety.  So the chancellor (in this case) is determined to convince the People that the threat has been compromised so they Will continue to believe the government can protect them.  If they are unable to take care of One Man, how can they possibly be expected to Keep England’s People safe?  (I thought it might be worth mentioning why the media is lying about having V in custody when in all likelihood, it is only going to come back and bite them in the…  Arse?  Can I say ‘arse’ and still be considered ‘family friendly’?

Anyway, that’s all for today, be back next week with another.