Hello every One, and welcome to the Good News Journal, thank King You for being here!  Once again, I appreciate You so much more than You can know and I sincerely appreciate Your continued support in My absence.  I am officially so ‘enraged’ with the incompetence of every single level of Canada’s government that I can’t even sit down to Write a final letter of response because (although I Will always Keep it professional) I know My Words and the legal arguments I Present to support them Will be absolutely ruthless and Will not feel like much of a ‘Gift’ to Chris Tuck or Kristine Haines-Chiarello, the individuals who Will be receiving them.

I am absolutely fed up with People ‘believing’ they have no obligation to protect the Common Law rights of Canada’s People when legally, they very much do!  This especially angers Me when it is an individual in the administrative capacity of a Trust they don’t seem to know or comprehend.  Thankfully, this Thursday Thing King Edition is not about My frustrations with Canada’s incompetent government officials, today is all about My ‘Sic Succs, Rooting for Healthy People’ campaign, which I have since decided I Will use as a vehicle to conquer the world!!!  😀

As far as My absence is concerned, I am as King of You for Giveness; I must confess I have fallen in Love.  She is a Wonder-full lady, her name is June, and she was Gifted to Me by the Universe on My name day this year.  It was also a Magical full Moon celebrate Sean for the day, and I had been as King of the Universe the night before to please Gift Me with a Sign of Life from a small stem cutting I’d saved from My previous place.  A new leaf finally emerged to greet Me the morning of My name day, three full months after the cutting had been planted!  Now, she is two months and seven days young.  Isn’t she gorgeous!

And I didn’t forget the Quest-Ion mark at the end of My last sentence because there is no Quest-Ion about it, June is spectacular!!!  Not sure how Good Your eyes are but if You look very closely at the base of her stem, You Will notice there is another set of leaves coming up!  Zoom in on the photo and it appears there might be a third starting, too!  Technically, there should be two stems because she was propagated from a stem cutting and the stem Will [usually] produce two stems in place of one.  This is how One creates branches on a tree or bush One is shaping.  June is one of My ‘specimen’ plants, one that is not for the purpose of production for My not for profit campaign.  What makes June so Special is that she was Gifted to Me immediately after I was as King of the Universe for it.  Now, that Gift has inspired the Idea to dedicate the leisure time in My Life to Gifting as many plants as I can to People every year on My name day!!!  This all came to Me when I was thing King about when I should plan on having My first set of succulents ready for Gifting.  I had initially considered Christmas but My Wish Will be for the plants I Gift to be reasonably well established, at least as nice as One Will expect from a reputable nursery – no point Gifting mediocre plants!  Ideally, a year Will be perfect and then I can focus on maximizing how beautiful I can grow a plant in that period of time.

The benefit to all of You, is that I Truly am an expert with plants and I Will be sharing My insights with You because I believe You Will learn things here You may not learn or hear anywhere else.  In the dish above are ten Crassula Ovata plants Created exclusively for My production line.  She was the first succulent I received, so she is the first to be Honoured with ten plants [exclusively] for the purpose of production.  The two leaves You see in that dish are still from the original seventeen leaves I cut from the initial plant.  They are not still alive because I have read and studied all kinds of information about how to propagate Crassula leaves, they are alive because I pay attention to My plants.  They haven’t become plants yet because I hadn’t studied all kinds of information to discover how to maximize My potential success.  What I have been doing, it continually checking on them and trying different methods.  I managed to try a number of different techniques without ever killing them, simply because I Will remove them and let them dry out again if I ever notice they don’t look healthy.  Really, I wasn’t doing anything wrong, I was allowing the plant to do what it would naturally do in its environment, and that process probably takes about two to three months depending on weather conditions.  Regardless of weather or rainfall, any [healthy] leaf Will produce a new plant entirely on its own.

I Will now officially call My Self an expert in propagating succulent cuttings and leaves, and My preferred method is leaf propagation because it produces an entirely new plant the same as it would from seed, where a cutting Will always build on the trunk of the exposed cutting and usually produces two or more plants (which are actually new stems on an ‘old’, rooted plant).

The Idea is to Give People a plant they can make their own, so My Wish is to Give plants to People after one year of natural growth with well established roots in a 2.5″ clay pot that should suffice for one additional year (succulents don’t mind cramped roots and can actually thrive in such conditions).  I Will also be mixing My own custom potting soil based exclusively on My own tried and True methods.  I believe I can now propagate a leaf from cutting to new plant in less than seven days!!!  So far, I believe I can do this with virtually every plant, I am still waiting on Echeveria leaves right now, they may take a little longer, I Will have to see.  My new techniques work flawlessly with everything so it is just a Matter of observing how long it takes, and being patient. 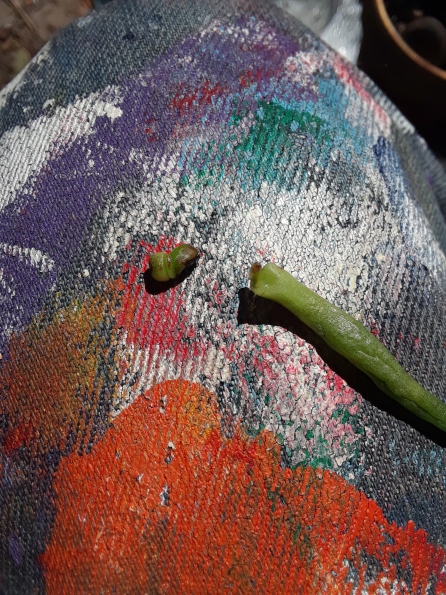 Initially, My Wish was to Write a single Post where I shared all of the Magic of My day tending plants.  I procrastinated a little because I Wished to be able to share something that was truly exciting and meaningful.  I have been propagating leaves for almost three months and at the time of My last post had produced zero results (though all stem cuttings had proven successful)!  Here I am tall King about how am thing King I should plan to have at least 500 plants to Gift if I Wish to do it right, and I can’t even propagate a single leaf?!  Well, I had initially Wished to Show You how I knew My technique was war King and We Will just need to be patient.  Two hours later, the leaf I was going to Show that I ‘expected’ would produce a new plant sometime within the next twenty-four hours, had already done the job – My first plant from leaf!!!  But as I finished tending My plants for the day, I discovered it wasn’t just one!  Something like twenty leaves had the beginning of the new plant showing and now I knew how it was done.  The new Magic of this discovery?  A single leaf can be used infinite times to create a new plant!  That is what You see Me Showing You in the photos above.  The leaf separates itself from the new plant, though remains attached, just as it would appear on a mature stem.  So even a ‘not perfect’ leaf Will become a perfect leaf after the production of its first plant.  Better still, when the new plant first appears, the leaf seems to Wish be separated as it creates a perfect division and maintains the seal and root so it doesn’t even need to be dried out again, it can just be reinserted in a farming medium and harvested every few days!!! 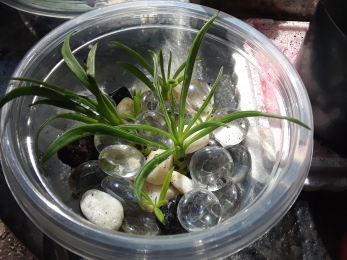 Above are another ‘Mother Dish’ of Peperomia Ferreyrae and a tray of propagating Echeveria leaves of various varieties.  I believe there are fifteen leaves in that tray, I expect all but the yellow looking one Will produce a new plant within the next week.  Echeveria seem to take longer but appear to Create the new plant exactly the same Way.  My new favourite plant of the day, however, is Kalanchoe.  This plant Truly is virtually indestructible!!!

And look at how it propagates!!!  How cute is that, seriously?!  See the two little brown dots at the end of the leaf?  That’s the new plant!  The leaf is currently separating it Self from the main stem, at which time I Will be able to remove it and use it to create another cutting.  Funnier to Me still, the roots of the Kalanchoe are equally furry which just looks hilarious.  Hard to believe it is a plant until One sees how well this defense mechanism works.  The leaves Keep water off the surface of the leaf which is basically how one goes about guaranteeing success.  Keep the root end moist, keep the leaf end dry.  The greater the contrast between the two, the faster the result (so far in My observations).

I’m going to leave You with a few more photos for entertainment Value as I have Writ Way more than I should and still have plenty to say.  Every day and often several times in a single day, I am Gifted with new surprises by My plants.  I cannot convey the Joy this venture brings to Me and I Truly need this now for My own mental health and well being.  My recent experiences with Canada’s government have left Me feeling as though I cannot relate to common Man, it is difficult for Me to comprehend the lack of moral integrity of the so called ‘professionals’ representing Canada’s government.  When I return, Will be sharing more of the Magic of My microcosm with You because there are truly miracles happening around Me here every day, and My Wish is to share the Magic of that with You, rather than rant about corrupt government officials.

Below We have Our original Crassula Gollum and You can see all the new growth emerging on her.  To her right, You can see a new terrarium which has one of each leaf of My original thirteen succulents (I have since acquired Crassula Hummel Sunset and Echeveria Black Prince). 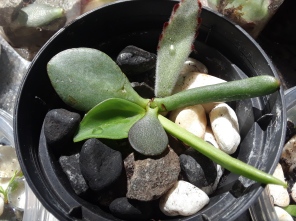 From the original eleven plants I started with at the beginning of this month when I decided to take this Idea seriously, I have 208 potential plants last time I counted and I believe I have added roughly ten to fifteen to that number.  The goal is to see just how many plants I can Give away on My name day next year.

This is just the outside stuff, I’ll Show You what I have going on indoors next time!