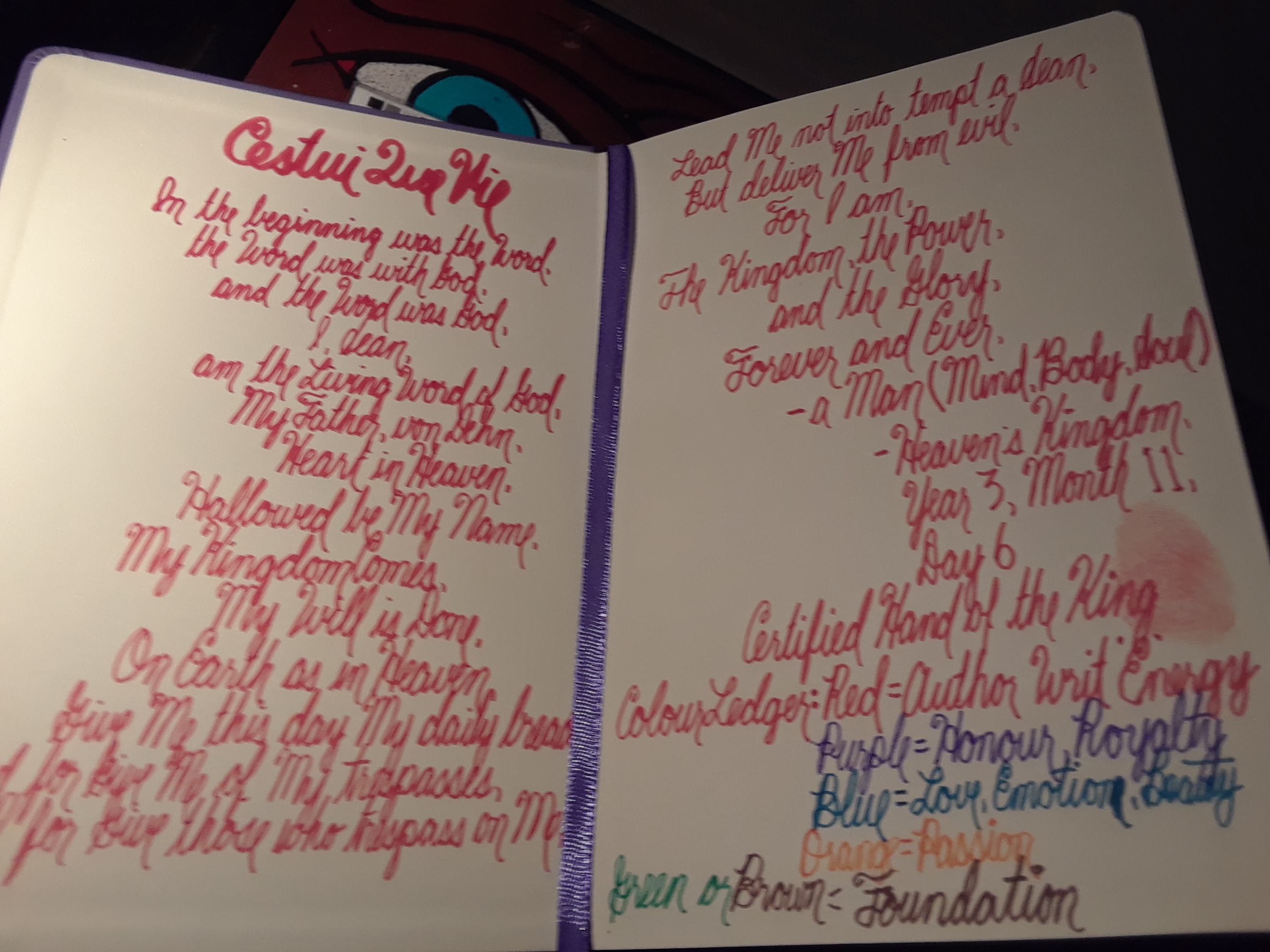 Hello every One, and welcome to the Super Natural Son Day Edition of the Good News Journal, thank King You for being here. I really have an exciting Edition for You today because I Will be introducing the New Calendar for God’s Kingdom on Earth! Yes, really.

Today’s feature photo Will help Me to explain why.

Today is the Seventh day of the Eleventh month of the Third year of the Establishment of God’s Kingdom on Earth; it’s officially the Day the Kingdom of Heaven became a real, legal entity on planet Earth. I have explained that My Cestui Que Vie Will one day be known as the world’s most Magical document, and the reason why is because it incorporates (pun intended) the Laws of Man with the Laws of the Universe. DaVinci’s Vetruvian Man decoded. It is not a coincidence that they Called a film ‘The DaVinci Code’. It is a code, it’s a visual diagram of Man’s relationship with God.

It also includes all of the Elements of True Magic; Scribing with a Calligraphy Pen to Create a Foundation for God’s Kingdom, then Four Pillars of Man to make it strong. I didn’t Create it on Christ Mass day by accident. I had to wait almost ten months after knowing exactly what I would Write and how I would Present it before I could perform this Ritualistic Ceremony to Celebrate the rebirth of My Character in Man’s fiction.

The interesting thing for Me about this is that I hadn’t ever really considered a ‘new calendar’ for the Kingdom of Heaven. Part of Me figures We won’t need calendars at all when the whole Christ Story finally ends. Do We need a calendar? Well, I needed one. Really. I am Living My own Life, this is My Story – at least for Me and for any of My children. My family Manifest is to Celebrate the Significant events of My Life and family. What’s more interesting still, is that I tell You now, it Will be the official calendar of the New world. I don’t know how I can tell You I know this, I just do.

The Kingdom of Heaven was officially Established and Founded on December 25th, 2016, which is day zero for My House records. It seems more than perfectly reasonable to Me, it seems absolutely critical! I mean, Will My children not Wish to know how it all came to be? Yeah, that’s the other thing that’s a little strange, it was thing King about My future Son that inspired Me to purchase a new Journal to Create a family Manifest. I guess You would have to really know Me to know how bizarre that is, but I have never even considered the Idea of having children, now I am picturing three. Can’t even tell You why, but it seemed important to have a Good record to leave behind for My successors.

So I’ve officially Created a ‘Magical Family Manifest’, and the Idea was to Create something of an instruction manual for My children so they Will know how to Stand in Honour and maintain their Honourable Status in society. I believe My children could be more well Versed than I am in defending their Kingdom at eighteen than I am now. If My children know who and what they are from day one, it Will be very difficult to be tricked into bondage.

I have so many more things I would Love to share with You but they are inside the packages pictured above. I Will be Keeping the contents Secret until they are received by their desired recipients but I’m very excited to have everything done and ready to go. I’ll be sending the package off to the lawyers tomorrow and Will be delivering the other package to Catherine by Way of My own Hand on Tuesday.

It’s a little early to Sign off on this Post just yet but I’ve had a few People tell Me they think I should Write another Book and I really haven’t had any interest in doing so because I am able to share My thoughts with the world here. However, without really having the Idea for a Book in Mind, My Family Manifest is a Book and perhaps because I was Visualizing My future Son, the Words flowed very naturally and I am beginning to think it is a very Good Book.

I Write about some of the Ideas I was explaining in a recent Post about Trust Triangles and how a Trust works. I Write about holding a position of Office, what it means and what elements are required to occupy the position. In fact, I think I’m going to finish up this Post by sharing the introduction to the first section of the Book, Titled ‘The Order of God’s Kingdom’.

Holding a Position of Office

Okay, I think that’s a Good preview, share Your thoughts if You Wish. One more thing I Wished to say about the calendar though, is that it seems to be Magically syncronized with the calendar We are using now, which is why I think it Will actually be the new global time soon. Time Will tell. 😉