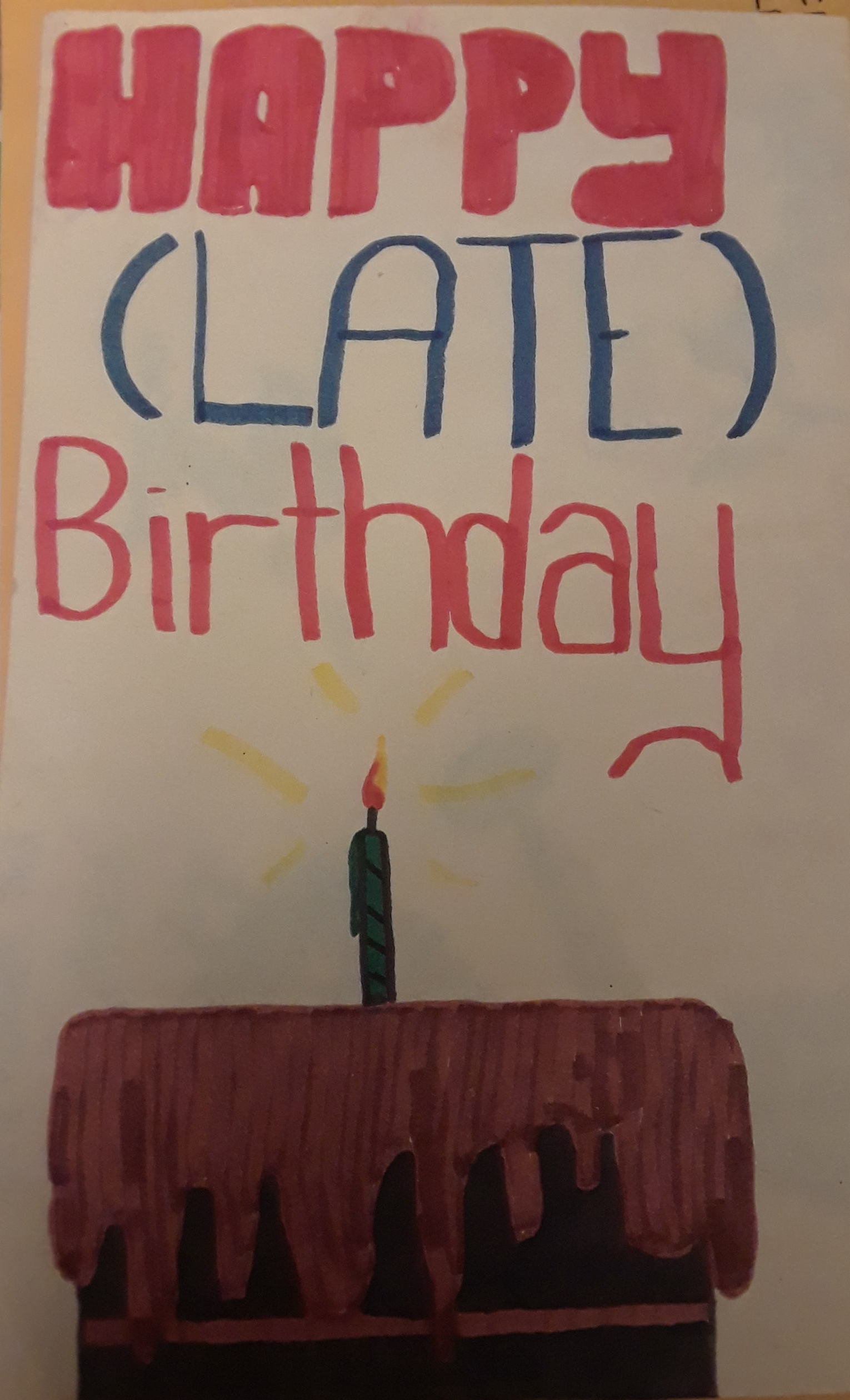 Hello every One, and welcome to the Magical Monday Motive A Sean Edition of the Good News Journal, thank King You for joining Me.

It has been a Magical Monday for Me because this arrived in the mail for Me today, courtesy of ‘Mum’.

And how funny is this?! There is a short story behind this card, too. When I was really young, a few years even before this, I had sent a birthday card to My father’s favourite aunt, Madeline. I had never met My father’s aunt but I liked to draw animals and plants that could ‘talk’, so I sent her a card sort of like this one, except much more detailed (I had filled the whole background to look like a jungle), and My father told Me how much his aunt had loved My card and said that he would love it if I would make one like it for him one day. I forgot I had Honoured his request. The cake on the front is supposed to be a black forest cake, which was My father’s favourite and is now My favourite, too.

What amazes Me most about seeing this today, is how similar My Writing is! I was probably only eight or nine years old at the time, maybe even younger! I remember My father telling Me how much he loved the card, too. He told Me that he treasures the Gifts his children Give him more than anything in the world, and this proves there was some Truth to what he said. The card is in perfect condition and Will be a beautiful thing to add to the House of von Dehn Magical Family Manor Roll. One can also tell I had a ‘thing’ for alliteration at an early age.

The other thing I found somewhat interesting about this is that when My mum first came to visit Me in Vancouver, My apartment was literally filled with somewhere between twenty and thirty portraits in various stages of completion. My mother was shocked! She stood there in awe looking at all of these paintings and asked Me when I had developed this new talent, insisting I did not get it from her.

Well, apparently My father was quite the artist, too – he just never shared his work. In fact, the paintings of My father’s I did see were so Good that I would not have believed they were his, except I would know his Signature anywhere and it was definitely his Signature on the paintings. A friend of My father’s Facebook messaged Me after My father died and said he has a couple of My father’s paintings that he would like for Me to have – I am very excited to get My hands on them. Ironically, My mum says she has no knowledge of My father painting anything and that is very peculiar because he was far too talented to be able to hide that kind of skill – it takes time to master painting the Way My father did. It seems bizarre that My father could have this incredible talent My mum didn’t even know about!

The other reason this was kind of Magical for Me is because I was thing King about something My brother had said to Me in one of Our last conversations regarding My father’s estate. He was angry with Me because I was not supporting My sister’s application and told Me he had found the last Letter I had Writ My father. I had told My father in that Letter that I was only there to help him clean up his house, and it was a shame he had become so untrusting and paranoid that he believes everyone who tries to help him has some secret agenda to take advantage of him. I also told him in that Letter that if he did not change his Ways, he Will die alone with his dogs in a run down shack (or something like that).

My brother seemed bitter and ‘congratulated’ Me on how My Words manifest and My father had died exactly as I had predicted he would. It was almost like he was blaming Me for the Way My father died. I didn’t really know what to say because I was surprised My brother had not told Me about this Letter before, he had found it several months before this conversation. I don’t think I said anything except that I would like to have that Letter, would he please send it to Me at his earliest convenience. He said ‘No’!

I was so furious I didn’t even know what to say because obviously, it is not his to Keep. For whatever reason, I was thing King about that today, and how I Will go about making sure I do get it (I do believe he Will Give it to Me and was just lashing out that day). I leave My apartment to go for a walk and enjoy some fresh air, check My mail on the Way out and find this card in My mailbox only moments after thing King about how I Will get the other Letter I Writ My father back from My brother.

It is a Magical Monday in Deed.

I hope You are all well.