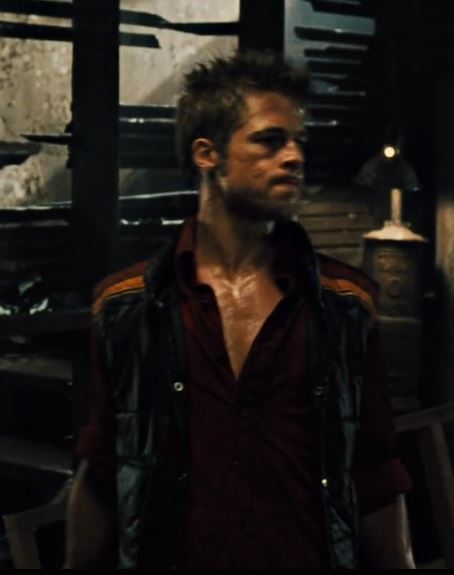 Hello every One and welcome to the Tuesday Tell a Vision Edition and as always, thank ‘King You’ for being here. You ARE the King of Your destiny and I care not what kind/sex of Man You are. Let’s get back to Our story and see what the Destiny of Our nameless Hero might be.

Last week Our nameless Hero’s Friend and idol, Tyler Durden took a very serious beating by the owner of Lou’s Tavern where they host Fight Club. It was costly for Tyler physically, but in the end Lou gave his Word they could continue to use his bar. I mentioned that this is also a parallel to the Story of Christ as Tyler endures a beating most men would not Wish to bear (and I have suggested virtually all popular film and television mimic the Story of Christ in some Way).

After taking the beating, Tyler is picked up by the members of Fight Club and carried to his ‘throne’ (it’s actually a toilet but the metaphor is intentional). He pulls out a cigarette, one of the members lights it as soon as it touches his lips. These men adore Tyler, they worship Tyler, they serve Tyler. And Tyler Gives them a homework assignment – to start a fight with a complete stranger… And lose!

Our nameless hero comments on how this is not as easy a task as it might sound, “most normal People will do just about anything to avoid a fight.”

And it’s True – even Me. I’ve been in more fights than I could even begin to count – My best Friend of over thirty-five years has never been in a fight. Can’t tell You why because I certainly don’t go looking for them but I think it has something to do with being an ‘alpha’ male. Other ‘alpha’ males feel threatened for some reason and because I don’t look physically imposing, I probably seem like an easy target. I think it also has to do with the fact that most times men Will try to assert their dominance with insults and I’m pretty witty when I Wish to be so that just humiliates them and fighting is the next ‘go to’ for men. It’s sad but it’s True. Even Jordan Peterson comments on this phenomenon in one of his lectures which I found rather interesting (as he’s a well respected clinical psychologist).

You may remember from a previous Tell a Vision Edition that when asked who Our nameless Hero would fight if he could fight anyone, he replies, “My boss.”

That was what they call foreshadowing.

It is another priceless scene. In the beginning of the film Our Hero was tall King about how he works for an insurance company and if the cost to recall a faulty vehicle is greater than the cost to compensate those harmed or killed by the fault, they don’t recall the vehicle – simple economics and probably exactly how insurance companies operate. Here, Our Hero uses this knowledge to blackmail his boss and tell him that he needs to Keep him on payroll as an outside consultant and his job Will be exclusively to not tell People what he knows about their company.

“I don’t even need to come into the office, I can do this job from home.”

The boss picks up the phone to call security and Our nameless Hero states that he is “Jack’s smirking revenge”, as he begins to beat himself up!

The boss puts the phone back on the receiver in disbelief as Our hero continues to destroy himself, falling through a glass table, repeatedly punching himself in the face as his boss watches in horror. Like a page out of Tyler’s book when confronting Lou (Lou’s Tavern), Our Hero eventually grovels at his boss’s feet, covered in blood, begging him to stop just as security arrive on the scene. Of course, Our Hero gets what he was as King for and Fight Club becomes a nightly event with ‘corporate sponsorship’.

Homework assignments also become a nightly event with Tyler Giving new tasks to all the members in sealed envelopes as they leave Fight Club. The assignments involve some kind of mischief or vandalism (but no harm to People).

The fun ends when Tyler pulls out a gun to the surprise of Our nameless Hero and tells him to meet him round back. A few moments later, Tyler is pushing a Man out of the convenience store at gunpoint, tells him to get on his knees and give up his wallet. The Man complies, shaking and terrified. Tyler routes through the Man’s wallet and asks him what he had dreamed to be and threatens to kill him if he doesn’t answer. The Man confesses his dream was to be a veterinarian but it was too much school.

“Would You rather be dead?”

Tyler tells the Man he’s going to let him go but he knows where he lives and if he’s not on his Way to becoming a veterinarian in six weeks he Will be dead. (I did mention this film is not for the faint of heart, right?).

Even Our nameless Hero draws the line here and asks Tyler what the point of it was.

“Tomorrow Will be the most beautiful day of Raymond’s Life.”

Now of course there is nothing in the world that Will justify Tyler’s actions but what he says is True. In My interpretation of the Netflix serious ‘The Family’, they touch on this Idea, too. People don’t usually take drastic steps to improve their Life until something tragic happens that makes them reconsider their path and purpose. Tyler was moving this transformational process along for Raymond.

Tyler tosses the gun to Our nameless Hero who immediately checks the chamber to find it empty.

The acts become more mischievous and the vandalism more explosive.

Alright, We are already over 1,000 Words which means it’s time to wrap up. The Significance of this week’s edition is that We begin to discover that Tyler is organizing the group with his little homework assignments, testing the loyalty of the members of fight club. Tyler and Our nameless Hero have a conversation about Fight Club’s starting up in other nearby cities. Some are set up by Tyler, some are being set up by strangers with an affinity for Tyler and an entrepreneurial Spirit. Fight Club appears somewhat chaotic but is developing a sense of Order.

Until next time, thanks for being here.