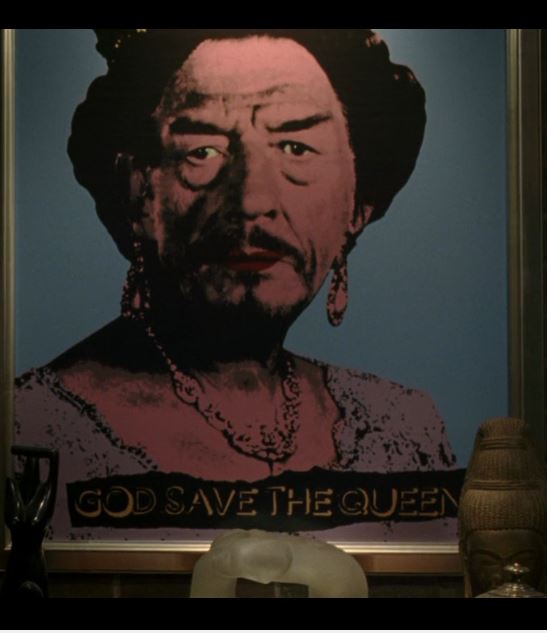 Hello every One, and welcome to the Good News Journal’s Tell a Vision Tuesday Edition, thank King You for joining Me.

In Our last Edition, Evey offered to help V with his next victim but it was really just a ploy to escape. While V is assassinating a bishop of the church, Evey takes advantage of the opportunity and makes her getaway to Gordon’s home, the Friend she was on her Way to visit at the beginning of the film when she first encounters V.

Evey knows she is putting her Friend Gordon in a dangerous position and apologizes, explaining she had nowhere else to go. Gordon tells Evey not to worry about it, that she Will be the least of his worries if the authorities were ever to search his house. Gordon takes Evey to a secret room in his home filled with artifacts and other items that have been banned since the rise of the High Chancellor to alleviate some of Evey’s guilt.

I felt this was a significant image to capture because We don’t know what happened to the Queen, but it is clear that Sutler is now head of state. In My Matrix interpretation, I suggested that Trinity represents the Queen in Our current system of law, and that she requires ‘saving’ because her reputation is at stake. Her Majesty is head of state of all commonwealth countries, and all those commonwealth countries are continually creating new laws that trespass upon the inherent (God Given) rights of Man. Her Majesty is the defender of the Faith, so any trespasses upon the inherent rights of ‘Her’ People stand to tarnish the Queen’s reputation for failing to protect their Sovereignty. The loss of the Queen represents the loss of the defender of the Faith, a ‘Godless’ world. It is not a coincidence that the same Idea is presented here in a different Way. The loss of the Queen’s authority represents the end of God’s authority on earth (because Her Majesty is also God’s representative).

Gordon also maintains a copy of the Quran, and Evey asks if he is Muslim. Gordon tells Evey that he’s not, he simply finds the poetry and images beautiful. We don’t really know what the religion of England is under Sutler’s rule because they never clearly define it. We know they do have faith in something because they reference the fall of the United States, and insist that it fell into chaos and poverty because of ‘Godlessness’. The fact they do not identify the religion of the state under Sutler, symbolizes that for England, Sutler is God, as he is the supreme law of England.

As Evey is thanking Gordon for providing her with refuge, she notices a wall of explicit sexualized photographs of gay men. Gordon notices Evey’s shock and confesses to her that he is a homosexual. Although they don’t really emphasize the point in the movie (I believe for the purpose of emphasizing Evey’s ‘innocence’ and the Divine feminine), Evey is a call girl as well as an intern for the television network. She can’t understand why Gordon would have invited her for supper if he is not interested in women. Gordon confesses it is to maintain the illusion of ‘normality’ and avoid suspicion. Homosexuality is forbidden under Sutler’s rule.

I’m also going to touch on the fact that Evey is a call girl playing a role in this film as the Divine feminine. That is what Evey represents in the film without question. So why would the writers Create a character to represent the Divine feminine that is also a call girl? It is significant because it is believed that Mary Magdalen was also a call girl before she became one of Christ’s followers. The significance here is that every One is purified in Christ, all People can find salvation regardless of their ‘sinful’ past. It is never too late for One to change their Way.

“You wear a mask for too long, You forget who’s beneath it.”

Gordon, from V for Vendetta

Again, not a coincidence. The timeline for the film is the year 2020, the same year every One was compelled to wear masks. It is a psychological tactic to silence speech (symbolically), and cause People to literally forget who and what they are. The People become a product of the dictates of their government, without any free Will or Mind of their own. We see People criticized and ridiculed for not falling in line and wearing masks, society begins to police each other by Way of social custom determined by authoritarian dictators. Canada is not only included in this analogy but is perhaps the world’s finest current example of a constitutional democratic monarchy giving rise to a fascist dictatorship led by Trudeau and his treasonous, criminal cabal as a result of a virus – the very same tactic used in the film to incite fear in the general population. People who are afraid are easy to control and manipulate because they Will always be looking (to some One or some thing else) for protection.

The scene cuts to the autopsy of the bishop. We discover that V is using poison to kill his victims, and the toxicology report shows the same poison was used on the bishop as was used on Prothero. Significance? Not one detail is a ‘coincidence’. The government created the virus that destroyed the People’s Way of Life and resulted in Sutler’s rise to power. It is not a coincidence that V is also using poison to kill his victims.

“What One does to another, shall be done unto them.” – proverb (maybe the Bible, too)

The film mimics ‘God’s Law’. No man can escape his fate in the eyes of God. We can hide Our evil thoughts and deeds from others perhaps, but God sees us for what We really are and is not fooled by any illusion. Eventually, Our Words and Deeds Will be the fruit of Our labour – Will it be sweet and Good, or sour and toxic? We Will One day be harvesting the fruits We produce.

Alright, We are just over 1,000 Words, so that’s where I’ll leave it for this week and it’s a Good point to stop. We’ll hear more from the doc performing the autopsy next week.

For now, thank You all so much for being here, I hope You are enjoying the Show because it is also playing out on the world stage right before Our very eyes. Let’s hope We can learn something from the film.