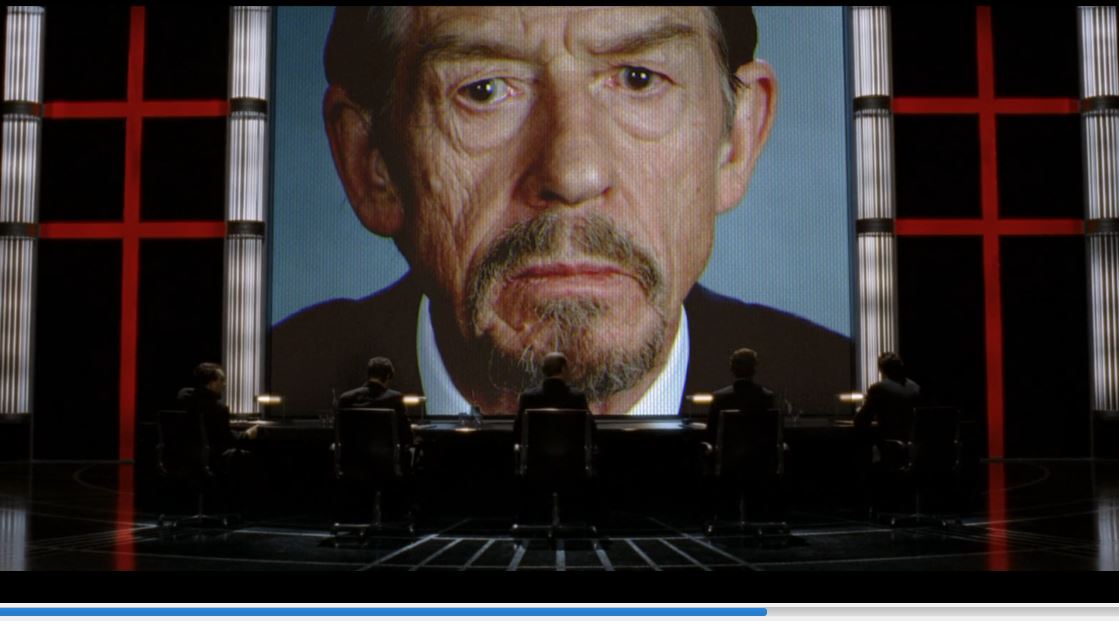 Hello every One and welcome to the Tuesday Tell a Vision Edition and Our Spiritual interpret-a-Sean of ‘V for Vendetta’. In Our last Edition, Evie has just been released from her transformational detention with V, and is back out in the world testing out her new Character on the world’s Stage. She Promises to come back once before November 5th to visit V.

Moments after she leaves, V removes his mask and throws it at a mirror. Evie once said that what happened to V had turned him into a monster. We get a sense that V views himself as a monster, too. There is clearly chemistry between V and Evie, though I’m pretty sure he is her brother. Nonetheless, it is the first time in the film that V is for vulnerable. For most of the film, V seems cold, ruthless and almost void of emotion.

There are five heads of security for the chancellor, one to represent each of the five sense. Five is considered the number of perfection because God’s most perfect Creation has two legs, two arms, one Head of State. Man is the five pointed Star of DaVinci’s Vetruvian Man. Even the evolutionary process of losing Our tail and walking upright are Signs that Man is ascending to the Stars. A tail is used for grounding and balance, losing Our tail represents being unplugged from the earth, and walking upright reflects Man’s aspiration for the Heavens.

The Chancellor is not very pleased. It Will almost be a year soon, November 5th is coming up. One of the reasons I’m doing this Tell A Vision interpret-a-Sean is because November 5th Will be the most momentous day of Our age, too. November 5th Will be the day We all decide to work together to heal the world, November 11th is the day it gets done. Six days, just like God did. Not sure on the year yet, but… 2030 might be a Good guess (’cause Magically it’s a five).

The Chancellor tells his five servants to basically terrorize People and let them know that they are on the brink of chaos. He is in fact instructing them to create terror to remind the People ‘Why they need Us!!!’… (Because they don’t, of course.)

The next scene however, is the reveal of the film. V is in disguise and meets with the detective. We learn how Sutler came to be Chancellor and how the government created a virus that only they had a vaccine to cure. They used fear to create even more pandemonium until there was a global pandemic of either real or imagined proportions. So long as everyone was terrified and looking for protection only the government could provide, Sutler’s rise to power continued.

In Our film, the only real difference between their pandemic and the alleged pandemic We’re experiencing now, is that in the film the virus is actually lethal and the vaccine is (so far as We know) harmless – but every One is dependent on it. In Our current situation, every One would be just fine if We’d never been told there was a virus to begin with. It’s purely fictional (sorry if I’m offending any who are legitimately terrified). And it’s not a coincidence that they Wish to discount any medical alternative but their vaccine and Create division among the People with new forms of medical apartheid like vaccine passports. In Our situation, the vaccines are the real danger and Will make People chronically ill so they Will be continually dependent on continual boosters with an absolutely depleted natural immunity. The vaccines Create the auto-immune disorder… But the vaccine companies won’t tell You that. Same Idea as using anti-biotics for too long.

How familiar does that headline look? How long were mainstream media feeds of every country in the world publishing the same garbage? This is terrorism, ladies and gentlemen. When the intent is to terrorize the public, it is terrorism by definition – doesn’t Matter if it’s mainstream media. If it’s government and they are using fear to subdue and coerce People into taking medications that may be lethal to them, it’s criminal. It’s an international crime against humanity (speaking of which, over 1000 doctors in Germany are suing Fauci, WHO, Bill Gates and a bunch of others in an international court for crimes against humanity).

V tells the inspector everything about Sutler’s rise to power and We learn of the government’s entire conspiracy and partnership with a large biotech company pumping out vaccines every One must take. Sounds a lot like what is going on in the world today. Coincidence, foreshadowing, or a warning of what could be? The interview ends with V as King of the inspector to place Creedy’s house on twenty-four hour surveillance if he Wishes to hear any more (and receive proof of the tale he just told).

We learn that even the most evil Characters have some love in their heart, as the next scene shows Creedy tending to orchids in his greenhouse with a magnifying glass and a water dropper before he is ambushed at knifepoint by V.

V is an elaborate thinker. He’s already projected his destruction of parliament as successful in his Vision for the future, and he’s considered that some One Will inevitably replace Sutler, the current High Chancellor. He has postulated that it Will likely be his right Hand Man, Creedy.

His tactics are so clever because this time V is using highly psychological tactics by stroking Creedy’s ego despite having a knife to his neck ready to cut his throat. He tells Creedy that he’s so intelligent and wise he would be the only logical choice to replace Sutler. So V offers to Give himself to Creedy in exchange for Sutler. He tells Creedy to place an ‘X’ on his door if he accepts the offer.

Alright, that sounds like a Good cliff-hanger to leave off with this week. I do not anticipate there Will be more than two Editions remaining for this series. After this, I am thing King about either ‘The Truman Show’, or Matrix II. With Matrix Resurrections coming out three days prior to Christ-mass, I’m tempted to lean toward Matrix, though I Will not get it finished in time for the new one anyway, and We still have a third in that series to review. Now I’m thing King I just talked My Self into Truman Show, so We’ll see!

Either Way, stay tuned into this Universal frequency.