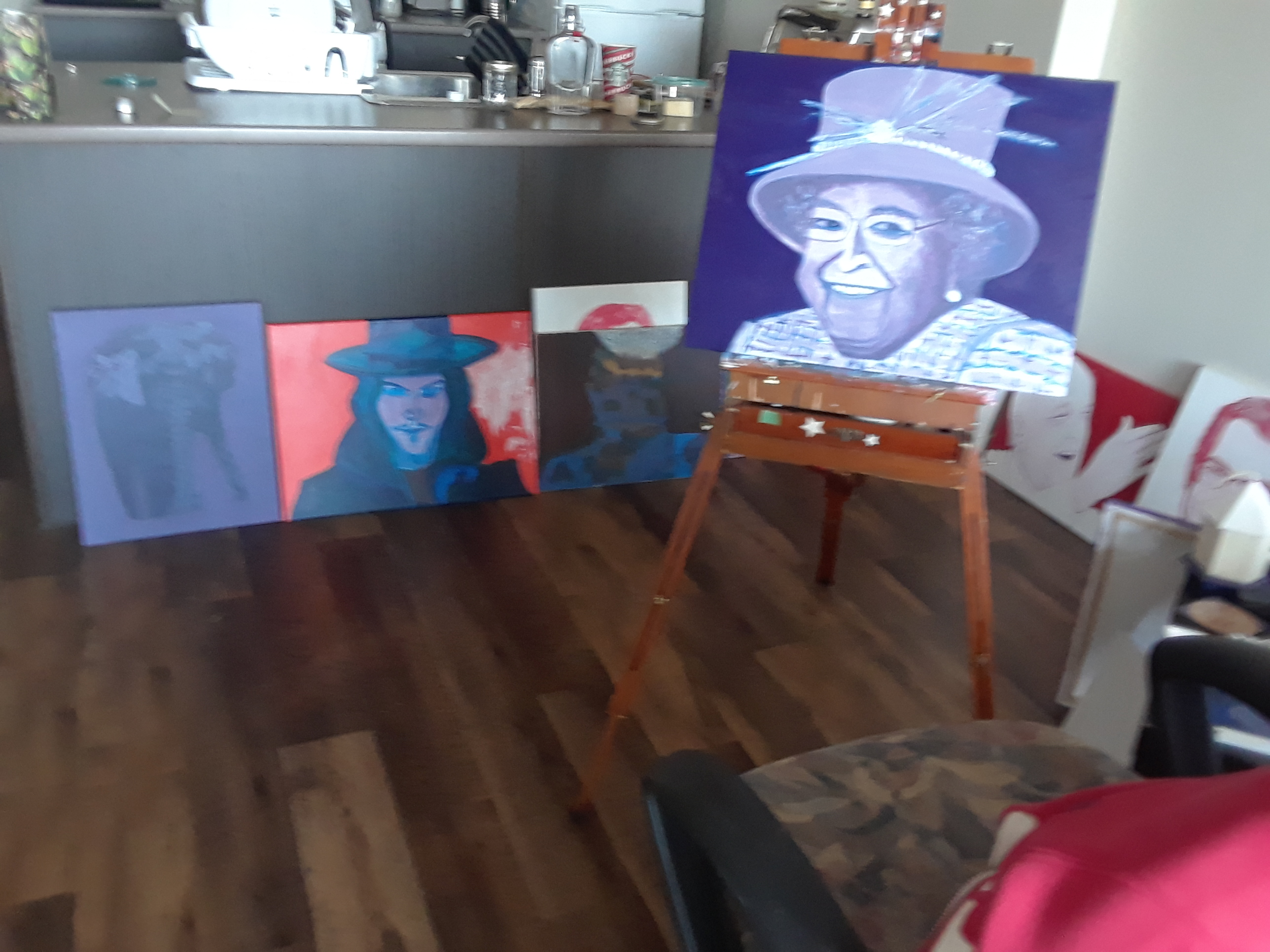 Hello every One, and welcome to the Simple Solutions Saturday Edition, thank King or Queen You for joining Me, welcome to House von Dehn, Kingdom of God. Today I Will be tall King a little more about ‘Plan A’. As Will Smith once said, “there is no need for ‘Plan B’ because it Will only distract from ‘Plan A’ (paraphrasing). But it’s True, and that’s the Simple Solution this Saturday.

The Character V from V for Vendetta was operating out of his underground home which he referred to as ‘The Shadow Gallery’. His dwelling was more like a museum of historical artifacts and classic literature than One’s typical, average home. It was also a safe haven for literature, artwork and music that had been banned by the fascist Chancellor, Sutler. V was attempting to salvage the great works and achievements of others before him, and I Imagine that being surrounded with such rich, historical culture was also a great motivator for V to continue on with his Quest.

Now, I have a proper war King space and gallery of My own which is luminated by the Sun every afternoon. I figured it is only appropriate that My new war King space be called ‘The Sunshine Gallery’, as My intent is to flood the world with the Light of Wisdom, whereas V was using his Mastery of darkness to embrace his Shadow Self (the animus) to bring forth the same Light. Once We conquer Our fear of darkness, Our ‘I’s adjust and We can see things as they are without Our fear based biases blocking Our View of a better world for Man’s kind.

I Wish to finish tall King about some of the things I had started to share with You yesterday in the Free Lance Friday Edition. In addition to tall King about a little cycling trip I took that I later learned was monitored and tracked by My phone from start to finish (for which I received a congratulatory message stating that I had met the World Health Organization’s weekly ‘heart health’ goal), yesterday was also lease signing day for the Sunshine Gallery.

I cannot understate how perfect this war King space is for Me. The only thing I could be as King for that I do not have, is a balcony – though that seems a very small sacrifice for the Art Studio I now have. This is more or less My Vision of the perfect war King and Living space for Me made Manifest. The most amazing thing about it, is that I had virtually no Hand in it whatsoever, I was just listening to the Voice of the Universe and accepting the Gifts God Gives Me.

I had no Intention of moving from My old apartment which I also Loved very much. But it did need some work and I real eyes’d that I was more in Love with the potential of My old apartment than I was with its current state. I Love this apartment ‘as is’, and it Will only become more beautiful the longer I spend here. Roughly two and a half months ago, I received a Notice that the landlord was selling the building I was renting as soon as all current tenants were able to relocate. That’s one of those Universal Forces beyond Our control, like Trump Cards from the Tarot. There is no point resisting what is, We can only ‘go with the flow’ as the expression goes.

It was My landlord who ran into Me ‘by coincidence’ (there is no such thing) while I was war King with a Friend. The apartment I am in now had just recently been vacated and My landlord suggested it would be absolutely perfect for both Me and My plants, and was as King of Me to take a look. I said I would, then learned how far away the apartment is from downtown Ottawa and said in an email that I felt it was a little too far. There was no pressure whatsoever, though My landlord did encourage Me to take a look anyway, I may find it is a worthwhile sacrifice.

I still wasn’t convinced, My ego was somewhat attached to the Idea of being downtown, though I am very critical of My own thoughts and reflections and began as King of My Self why is it important for Me to be downtown? I couldn’t come up with a convincing reason and later that same day, My Friend stopped by and was as King of Me if I had viewed the apartment yet. I confessed that I hadn’t. He told Me to check it out as soon as I can, raving about how perfect it would be for Me. I perceive all things to be the Voice of the Universe in One Way or another – this was now the third prompt from the Universe to get My ass over here and take a look. So I finally did.

I wasn’t at all ready to move and had not expected everything to transpire so fast when I viewed the apartment on the last day of September. I didn’t really know anything about the apartment, either. I had no Idea how much they were as King for rent or any other important details. The moment I viewed the place, I realized how perfect it was and said I would take it if was still available.

But I hadn’t Signed any paperwork yet, had no Idea how much the unit costs, so I said I felt I should probably wait to take the keys until I had cleared everything with management.

“We are only waiting on Your Word. You are the boss – if You want it, it’s Yours.”

I may be paraphrasing slightly, but if I am, it’s not by much. I distinctly remember thing King to My Self how unusual it was that she’d said she was waiting on My Word (because My Word is My True Magic), and I know for sure she said that, “I am the boss.” I would never refer to My Self as a ‘boss’ and don’t really like the Word because it’s the root Word of ‘bossy’, and I would never Wish to be perceived as bossy, though I knew it was meant to Honour My Character so I wasn’t at all offended – just unusually surprised and perhaps a little flattered. And to be Trusted with keys without any paperwork of any kind felt like a great Honour to My Character (and let’s face it, not at all typical when viewing an apartment).

Of course, there is all the ‘business’ to take care of as well, none of which I was much looking forward to. There are two government agencies providing My housing subsidy, and obviously both of them need to be notified. Ontario Works is not really a concern because the housing allowance has no bearing on the cost of My rent – it’s $390/month regardless where I am living (so long as I am paying rent to someone). But Housing Services is another Story altogether. Generally, they must ‘approve’ any new unit I am hoping to rent, and because I have a lawsuit against them in Ontario’s Superior Court, I can’t even contact them directly, I have to deal with the city’s lawyer. I also can’t do anything with either organization until the lease is Signed because they need to see paperwork to approve anything. So I figured that would be the first thing on My agenda as soon as the lease Signing was done. That was not the case.

The second page of the lease was a consent form to communicate with Housing Services and Ontario Works to facilitate the payment of rent. That was not a part of My original lease at My old apartment, this is new. Despite what People might be thing King, I am not opposed to these organizations sharing information regarding My rent as One may suspect considering My sentiments on privacy and autonomy. However, this was a huge bonus for Me because it confirmed something I had suspected – I’m reasonably sure this was a done deal before I even Signed the consent form. The other beautiful thing about it, is that this apartment costs more than My total subsidy allowance, and My (not for profit) landlord confirmed by Way of email Friday afternoon that if Housing Services does not approve the additional cost, it Will be paid by My landlord! When they said I have nothing to worry about, they meant it.

Haha, 1437 Words at the end of the last paragraph and I was feeling this was getting a little long, though I’m only about half done. So I’m going to pick this up tomorrow because I have a lot of thoughts on this. As a teaser, I believe the intent to having the consent form included in My lease, is so that I don’t have to deal with Housing Services at all! I can tell You that My landlord confirmed yesterday that I don’t need to contact Housing Services about the move, they Will forward the new lease to them, and pay any difference Housing Services does not agree to pay. I was as King of them to keep Me posted because I’m curious to know how cheap Housing Services are and if they Will stick the difference to the landlord, or do the Honourable thing and cover the amount (it’s only $50., but that’s a generous gift from a not for profit landlord, so I am hoping the city covers it).

I’ll be back to conclude this Post tomorrow and tell You how it all ties into My new Sunshine Gallery and moving for Ward (Ward=protect-Sean) with Plan A. 😉