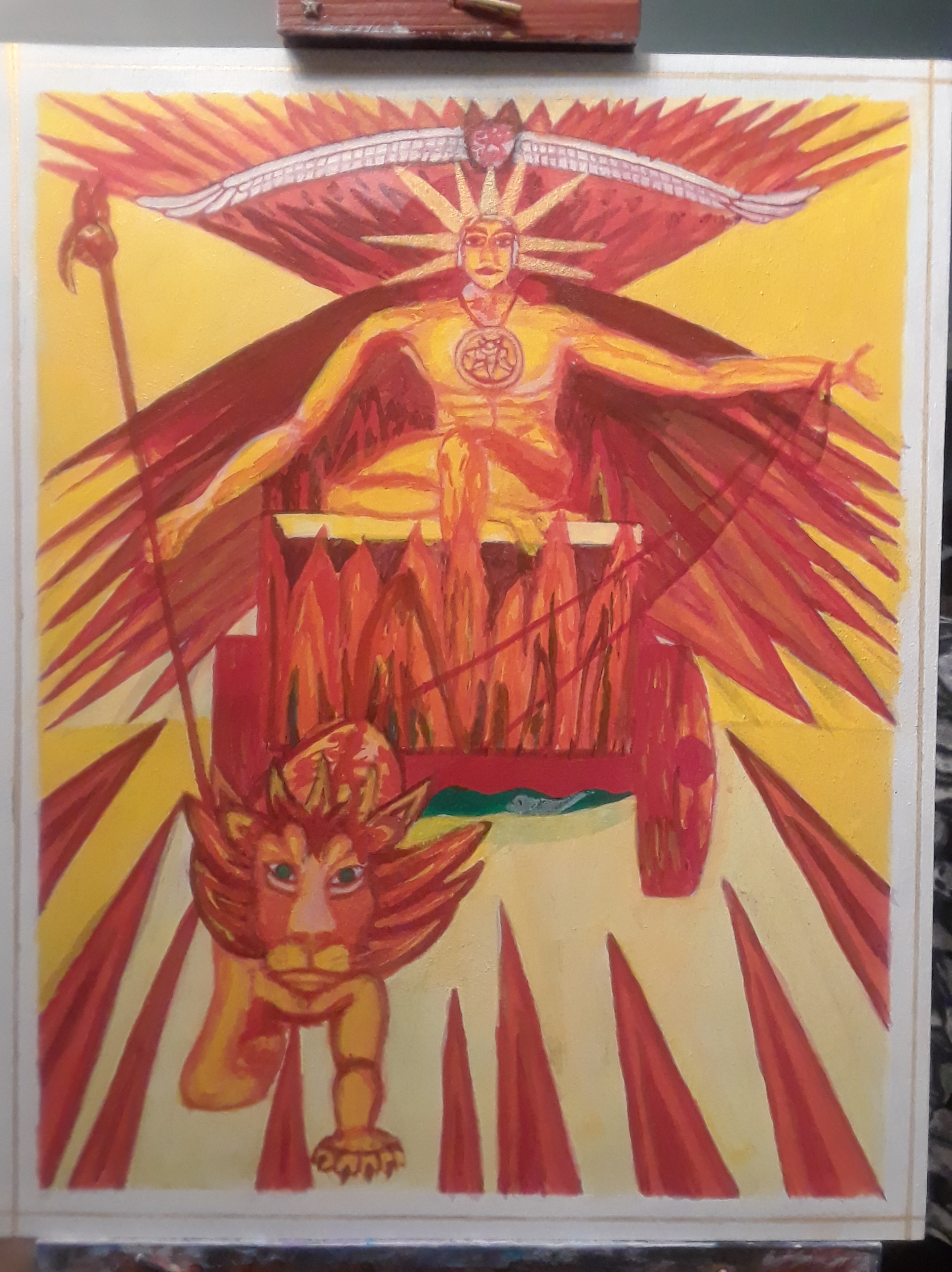 Hello every One and welcome to the Magical Monday Motive a Sean Edition, thank King Your Highness for being here. I have a Truly Marvel-Us Magical Monday Edition for You today. I have more Good News regarding My Father’s Estate, police Men (of either kind/sex) Honouring their Oath to protect the [God Given] rights of Canada’s People, a brief interview with Canada’s most Notorious constitutional lawyer, Rocco Galati, some Good News regarding the international criminal investigation into the mandated vaccines, the #TrudeauTruckStop #FreedomConvoy, an update on thirty days of war King out and maybe even more!!!

A Spell was Cast by Way of email this morning as King of Noah Potechin and Laraine Burton to release the surplus funds from the unlawful sale of My Father’s land equally among it’s entitled beneficiaries, with a little extra for My Sister to account for her previous legal ex-Pence’s (Crossing out debt) before 5:00 Post midi today. I was under the Impress-Ion that Noah Potechin and Laraine Burton were making an effort to redeem themselves of their previous trespasses upon My Father’s Estate, My inherent right to Honour My Father in the wake of his death as Commanded Me by God (and My Trust Instrument), and the consequent harm those trespasses have done to those My Father’s Estate was intended to benefit. Sadly, that was not the case and the reason for today’s Title and Tribute to Laraine Burton and Noah Potechin, ‘Capsizing Noah’s Ark’.

“Keep on as King and You Will receive.”

So it made My Magical Monday another roller coaster of a day because Noah’s reply came before I had the opportunity to speak with My Brother or Sister about it on the phone. Once again My Intent-Ions were vastly misunderstood resulting in another long, emotionally draining phone conversation for both of Us, virtually recounting every event of conflict this Matter has caused for all of Us (regardless Our position on the Matter, We’ve all been emotionally depleted and drained by the overall experience in one Way or another). I do jest and joke about My Sister, but there are a lot of complex traits to My Character that other People just don’t comprehend. I tend to forget I have these unique Characteristics, often presuming that every One else perceives the world the Way I do. I don’t just see the world a little differently from most People, I perceive the world vastly different from most People and My immediate family are no exception. In fact, they know that Characteristic about Me better than any One else which is all the more reason I tend to forget when dealing with Family.

At this point You might be wondering what about this could be Good News? Well, this was one of those converse-a-Sean’s that needed to be had. I didn’t share the private emails I’ve sent to My Brother and Sister here and I don’t intend to. I covered over the most important details contained in those emails with You here regarding My perception on the Matter, and I genuinely thought We were all in agreement that We just Wish to see this thing done, and that We Will distribute the funds equally between Us. I asserted that as long as We had an agreement between Us, there would be no Good reason for Noah to continue to withhold the funds, with or without a Certificate of Appointment of Estate Trustee. The main point I had tried to communicate was that no Matter what I decide to do or how I choose to deal with Noah and Laraine, neither My Brother or My Sister need worry about not getting their fair share. The absolute worst thing I would ever do, is prove that I can exercise My [inherent] Common Law right to Execute My Father’s Will as Commanded Me by God, Demand Noah release the remainder funds to Me (exclusively), disclose the accounting statements to My siblings and pay them each their fair share. Once I Give My Word I Will do something, I Will not break it!!! For Me, breaking My Word is like the absolute worst thing I can do next to Willfully causing harm to another Man. Doing so curses a Man’s Magic. The Universe always Blesses a Good Intention!

But see, I presume that People should know this about Me above all else. I presume that every One knows that I would never betray My Word. Only today did I real Eyes just how much I make that presumption with My family. It was something of an epiphany and a wonderfully transform a Sean all day for Me. I also presume that People can’t ever really be harmed by My Words or opinion, while simultaneously knowing I may well be the world’s most Mystical Man!!!

But much Good came of it because We both purged and My Brother and I (especially) have a very deeply rooted bond. It’s been rocky for a while but We’ve got a lot of history and lived a lot of Our Lives almost as much best Friends as We were Brothers. I lot of Good Real Eyes a Sean’s resulted from the Call.

One of most Significant moments of the conversation was somewhat heated when I said to My Brother, “they literally stole Our Estate by Way of trespass upon My right to freely dispose of My natural wealth.”

“I don’t know, Sean. If You’re right and Your Notices are legally binding, then how were they able to sell the house?”

“That’s just it, did they have any authorization to sell the house? What was Noah’s legal and lawful excuse? What legal or lawful excuse does he have today? Michael, if there is no rebuttal, it means he has no lawful excuse and My argument stands. He’s not gaslighting Me, he’s banking on the fact that You’re going to believe he’s right because he’s a lawyer and I’m not. Why can’t he answer the Quest-Ion?

It was a long converse a Sean but it was long overdue. It started the day with a stressful morning and I had numerous mundane chores to attend to as well. However, the weather was beautiful, the Sun was shining and it occurred to Me on a Wonder filled walk how unfair and oblivious I have been.

The main reason I don’t like lawyers is because they create conflict, not remedy. The goal of the lawyer is to convince the opposing party that they need a lawyer, too, otherwise their arguments are no Good without one. Of course, that’s simply not True but lawyers need to get paid and lawyers and commerce go hand in hand. They are either getting paid by their clients and collecting commission on a Claim, or they’re getting paid by the Court to enforce performance bonds. Either Way, the longer they can keep the parties to a Matter in conflict with each other, the more they stand to profit from their dispute.

Today I’m sharing a Viva Frei video I haven’t yet seen but I Imagined he would be doing what he can to cover the #TrudeauTruckStop #FreedomConvoy. It was the truckers who were as King that We help them to get #TrudeauTruckStop trending, so I’m hoping to Play My Part while Presenting a Tribute to a civil-lawyer-gone-YouTuber because the business of lawyering is so corrupt. He considered becoming a mediator instead (before becoming a YouTuber) because he had pursued law to help People resolve their differences, not create conflict to extract as much wealth from clients as possible while doing irreparable emotional and psychological damage to clients – and not even because he wasn’t genuinely trying to help his clients, but just because the general business of lawyering is so slimy and corrupt, ‘ruining the other party’s day is like a crack hit for a lawyer – ruining an entire weekend by serving on a Friday is a full eight ball.’

Just to be clear, that’s not a Viva Frei quote, that’s just Me trying to be clever. The point is, those are exactly the same reasons I don’t like lawyers, I know this is what they are best at, and I allowed them to do this to My own family. Having Me, My Brother, and My Sister at each other’s throats is exactly what they Wish to see. Honestly, it was a very humbling afternoon because I have no Idea how I allowed My Self to be so oblivious when it was so painstakingly obvious. I haven’t felt Truly naïve in a long time; it is not feeling I’m particularly fond of.

Okay, so We are long already and I haven’t even really started tall King about some of the other Good News of today. In My email to Noah You Will Notice I included a copy of the Declaration of Default Judgment awarded against him. Of course Noah is going to try to say these documents are not sufficient because he knows My Brother and Sister don’t know any better and Will likely believe a lawyer over Me. If he can convince them he’s right, then they Will not reply even if they were happy with the disbursements which interferes with Us establishing an agreement that would very much be legally binding – that’s precisely what out of court mediation is all about, getting all parties to agree so there is no conflict.

But it also allows Noah to try to convince My Brother and Sister that the Notices and Default Judgment served upon Noah and Laraine are also irrelevant and not legally or lawfully enforceable when the Truth of the Matter is, they are more enforceable now than ever before! Now My Brother and Sister have just witnessed Noah respond to the email containing the Default Judgment in the same correspondence.

“For where two or three are gathered in My name, there I am in the midst of them”

I’m going to do a Part II today to finish up this Post because We are already too long for the average Man’s attention span (in a single dose of Magic) and I still have lots more Good News to share to finish out this Magical, Motivate Sean all Monday Edition including Rocco Galati, criminal investigations into vaccine mandates, and more!!!