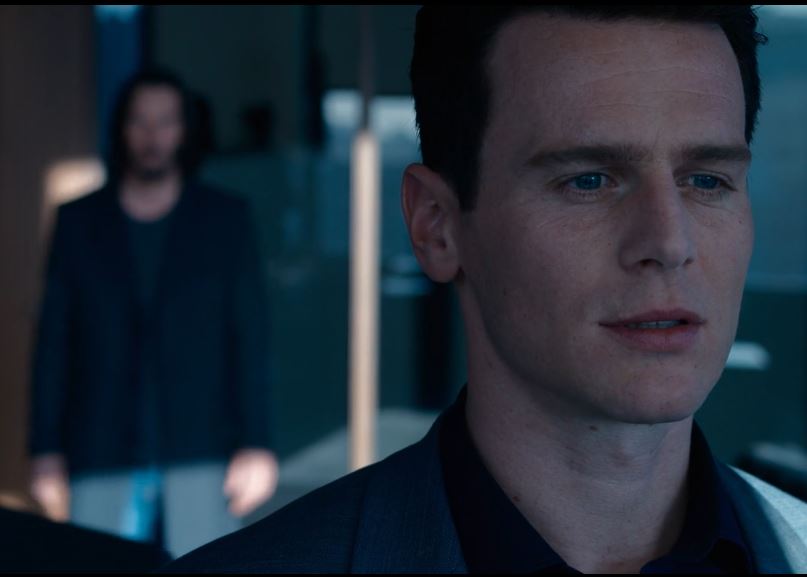 Hello every One and welcome to Our continuation of the ‘Matrix IV Resurrections’ Spiritual film interpret-a-Sean. Thank King or Queen You for joining Me, always a Pleasure to have You in My House.

Last week, Mr. Anderson met Trinity for the first time, though it was not the Trinity Mr. Anderson was expecting to meet – her name is Tiffany! This was the first crazy coincidence in the film because Tiffany is the name of a thirty-something year old stripper who believed she had a right to My father’s Estate. What are the chances that Mr. Anderson’s ‘anti-hero’ would have the same name as the real anti-hero of My Microcosm?

But that’s just the first convenient coincidence, this second one from the scene of today’s feature photo is even more… Kismet? Not sure I’m using that Word correctly but what I mean is that it would be serendipitous if it were not so eerie, and ironic isn’t the right Word, either.

Mr. Anderson is called into his boss’s office. As he opens the door to enter, his boss is gazing out his office window overlooking the city. Upon Anderson’s entry, he states,

“Billions of People, just living out their Lives, oblivious.”

So why is this a strange and eerie coincidence for Me? Because it was one of the lines I highlighted in My first Matrix Interpret-a-Sean! So I’m thing King to My Self, ‘Wait a minute, didn’t I quote that exact line in My first Matrix De-Coded?’. And as if on queue with a pause just long enough for Me to be thing King that thought,

“I always Loved that line. You Wrote that line, yeah?”

I know, a stretch for most People for sure. But keep in Mind that I don’t believe in coincidences and believed this movie was Writ for Me specifically, and that it would include a few ‘Easter Eggs’ as clues to let Me know – things only I Will identify with. I’m the only One who is going to get that joke – and Tiffany in place of Trinity when she is the nemesis in My Microcosm? Yeah, probably just a coincidence, right?

Alright, on with the relevant dialogue. Mr. Anderson tells his boss that he might be able to save him some time and trouble,

“I know Binary is over budget.”

“This is not about Binary, Tom – this is bigger than that.”

Before We get into what it is Anderson’s boss does Wish to discuss, I Wish to point out the use of the Word ‘Binary’ because it is not a coincidence, either. What is the new ‘woke’ social movement all about? Accepting People who identify as ‘non-binary’? Hmmm. Binary is the program Mr. Anderson used to program his Matrix [game]. Without Binary, there would be no Matrix game. Without sexes of Man, there would be no Mankind at all. We are being encouraged to identify as non-living, artificial, imaginary beings. Guess what? If One does not identify as either male or female, One is technically not human according to the classification of living things, which means that they would technically have no ‘human’ rights because they no longer identify as human being Man’s kind. If You are thing King I am kidding, passports in the U.S. now allow One to identify as ‘male, female, or ‘other’, and allow One to Write in how they Self identify. An ex-police officer in the United States showed his passport where he had self identified as a Minotaur – perfectly fine. The world has literally gone mad!

The boss Wishes to talk to Anderson about their parent company, Warner Bros. This part of the film surprised Me a little because I thought they were playing on facts about the cast’s response to a new Matrix film. I had heard a rumour that Keanu would not agree to do any more Matrix films because the films are so iconic, another film would be more likely to hurt the franchise than build upon it. I then heard that Keanu agreed to do the film because Warner Bros. had said they would make a fourth film whether Keanu agreed or not.

“Oh, they can. And they Will kill our contract if We don’t cooperate.”

So I thought this little dialogue was a metaphor for how Keanu was coaxed into the new Matrix film, adding some ‘Truth’ to the fiction for fun. I did some further investigation to see if that was in fact the case and it is NOT. Apparently, both Keanu and Carrie-Ann Moss were on board with the new film as soon as they knew Lana Wachowski was directing, and that information comes straight from the actors themselves in an interview about their decision to make the new film.

As Anderson is tall King with his boss, he has flashbacks from the first Matrix film – being interrogated by the agents with his mouth sewn shut, agent Smith marveling at the city. Anderson is seeing a therapist to control his visions and hallucinations. But the most important line in the conversation is this one.

“I know You said this Story is over for You. That’s the thing about stories – they never really end, do they? We’re still telling the same stories We’ve always told, just with different names, different faces.”

I feel this is an important line because it is so True. One of the greatest illusions of this physical realm, is the idea that things can end, that there is a limit to the abundance. There isn’t. We Will not overpopulate the earth because it is continually expanding and evolving just like the rest of the Universe. Energy does not die, it only changes form and Mother Earth is getting bombarded with incredible rays of energy every single day!

More importantly, it is the terminal point of death most of Us are concerned about, We believe THAT is the end! It’s really kind of funny when One knows that it’s not. Just a training ground, peeps! If You Master everything in this Lifetime, You Will Create Your own Universes when You ‘die’. When I said that the goal of the Tarot is to become the Emperor and the Star, it is not an exaggeration or metaphor. The Emperor is about being in control of One’s Life, Self determination, the Star is knowing that One’s Dream is their destiny – You are the Star of that Show.

Just toward the end of the scene, Anderson’s boss is tall King about how excited he is to be going back to where it all began, the first Matrix. As he’s tall King, Anderson notices his boss’s lips are sewn shut and he can’t make out what he’s saying. He believes these occurrences are hallucinations and is seeing a shrink about it.

Alright, that’s where We Will leave it for this week but there is a lot of information still to come in this film that Gives Us plenty of foreshadowing about where Our world is going.

Remember, public notices are not always titled ‘Public Notice’ – a ‘no parking’ Sign is a Good example of a public Notice. But every film, television show, piece of literature or artwork has the potential to be a public notice. If it is publicly available and contains information, it is effectively a public notice.

The reason I mention this is because Holly Wood (holly is the most Magical type of wood) is all about using film and television to provide public notices and foreshadow future events and agendas. We get used to an idea because We see it in film or television, so We are not surprised and more likely to accept the idea when We see it surface in Our Macrocosm.

Thanks for being here, I appreciate You!