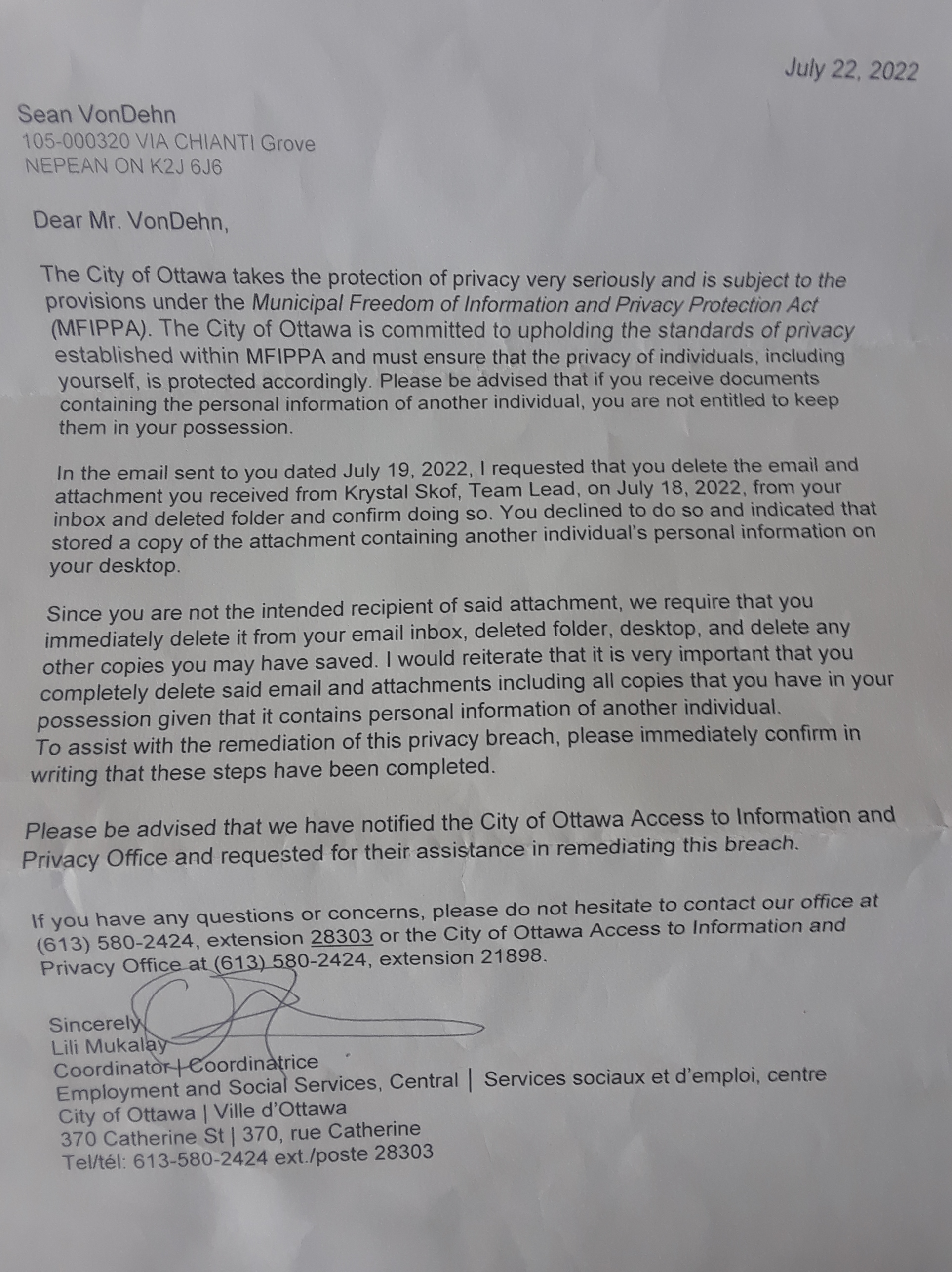 Hello every One, and welcome to the Fabulous Free Lance Friday Edition, thank King or Queen You for joining Me. It is another beautiful summer day, so I Will be doing what I can to Keep this one short so I can enjoy some inform a Sean downloads from the Sun’s Divine Rays. But today’s News is too Good to pass up, I have critical, relevant information to share regarding the recent Breach of Trust perpetrated by Ontario Works team lead, Krystal Skof, and her equally negligent ‘coordinator’ (that’s one of those titles that doesn’t really mean anything, they just make something up), Lili Mukalay.

Today’s feature photo managed to make its Way to Me by Hand, apparently?! It was a neighbour who handed the envelope to Me, saying that a Man in a grey shirt saying he was from the City of Ottawa was downstairs trying to get into the building to deliver it to Me. My neighbour offered to bring it to My door (where I obviously accepted). The point is, You know the City of Ottawa is freaking out when they Hand deliver mail!!!

But what was the purpose of the letter? My guess was an attempt to intimidate and coerce Me into conspiring with their efforts to destroy the evidence of their very serious Breach of Trust. But one can see very easily just how much this Breach of Trust is burdensome to Me!!! I am now being harassed and told to destroy documents that actually belong to Me that were sent in response to a legal and lawful Notice of Breach of Trust of Fiduciary obligations, evidencing further Breach of Trust, incompetence, and negligence – exactly the reason they were served with the Notice in the first place.

You Will again Notice they have absolutely no respect for how they address Me. They have been Given Notice plenty of times that I do not like to be addressed with the prefix ‘Mr.’ because I am NOT Holding office for their corporation! But these days, it doesn’t even Matter because I have a Trust instrument on file with Ontario Works, confirmation of that document being on file, and it clearly advises Ontario Works that ‘Mr. von Dehn’ is the name of an Estate or Beneficiary for which King Sean, House von Dehn is the Executor and Trustee [of the Man’s Will/Hand].

So of course, I responded to let them know I had received their letter and that I don’t care how many times they are as King of Me, I Will NOT be destroying the email thread because they are technically MY documents. It was/is My outgoing email to them, they sullied My documents with another individual’s information when I was as King for mine in their reply. Their reply to My Notice is MY document. It does not stop being My document/correspondence because it contains someone else’s information. And as I’ve explained before, as King to destroy the email is NEVER the right thing to do because there is no Way for any One to guarantee it has been done. The ONLY Way to limit the Breach, is to be as King the individual who received the information not to share that information with any outside party. They have NO RIGHT to tell Me that I cannot use the information to contact Colleen to make sure that she was Given Notice of the Breach, and assure her that I Will respect her privacy, and never share the document with any One else. So far, all I have tried to do, is make sure that Ontario Works is letting Colleen Lynch know what happened, and to make sure she is appropriately compensated by Ontario Works for their Breach. And if Writing about it here increases the Value of her Claim, then so be it – she deserves every penny!

I have an obligation to let Lili know that I have received her Letter and second request to destroy the evidence of her crime, and that I Wil not be doing so under any circumstance. Here is My Notice of receipt of her letter.

Now, Lili takes gaslighting to a whole new level in her reply. Gaslighting means to just ignore the Quest-Ions I am as King of Lili, and continue to ask Quest-Ions of her own while making assertions I have already rebut that she has not responded to. Where are MY documents? That’s what this was all about? Suddenly the loss, destruction, or negligence regarding My documents and obligations that were due a month ago are irrelevant? That doesn’t seem right, does it?

However, there is some wonderful news in the reply from Lili where she discusses her legal obligations under the Municipality Freedom of Information and Privacy Protection Act. The Act states that Ontario Works State Actors must Act…

“in accordance with privacy breach protocols that require the City to take steps such as containing the breach and notifying those affected by the breach.”

So here Lili is hoping that ‘containing the breach’ = ‘destroying the evidence’. No where Will it state in the Act that One should destroy evidence of the Breach so that the State Actor cannot be held liable for their Breach of Trust. Anyway, here’s Lili attempting to assert her Self and her position when she has in fact just conceded that everything I have told her she has a legal and a lawful obligation to do, she in fact has a legal and lawful obligation to do. See, I knew she would have these obligations before I knew what Act would ensure Lili’s performance.

Anyway, I may well be back tonight to be tall King about My Magical garden, ten foot tomato trees, and the first Prince of Peppers flower petals!!!