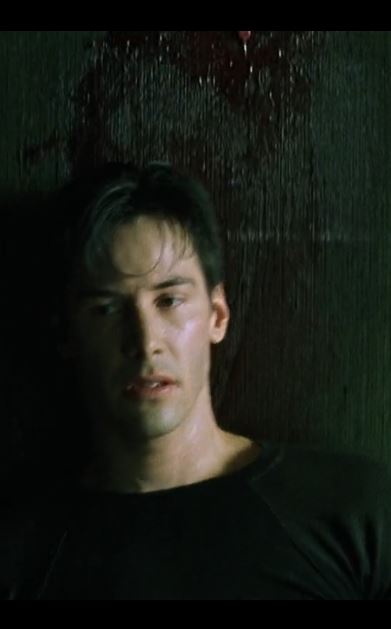 Hello every One, and welcome the Twelfth Part of My Matrix De-Coded series, thank You for joining Me.  We are two hours and three minutes into the Film, and in the last Scene, Our Hero Neo has been shot and killed.  So once again, let’s pick up right where We left off.

Back on the Nebuchadnezzar, Neo flatlines while back in the Matrix, Smith gets one of the other agents to make sure He’s dead.

And Smith has some final Parting Words for Neo, too.

This line is Highly Significant, too.  Mr. Anderson represents Neo’s ‘old Self’, a previous identity Neo had for Him ‘Self’  while He was Plugged (blocked, stuck) into (in Two) the Matrix.  Two is a Door because We all have an Animus or ‘alter ego’ that typically remains dormant to Our conscience Mind while Actively influencing Our Act-Ions; how We Play Our Part in the Universal Production We Call Life.

Back on the Nebuchadnezzar, Trinity is tall King to [dead] Neo,

Trinity goes on to tell Neo that He must be the One because the Oracle told Her that the Man She would fall in Love with would be ‘the One’.

Trinity doesn’t even believe it’s possible for Neo to die before He fulfills the Prophecy.  Of course, this is One of the main Themes of Christian philosophy/theology, too; the concept of Faith.  A con-cept is a trick (con) taken (verb ‘cept’, to take).  The Trick (May Tricks de-Coded) is that Faith is not enough, One must know.  When One knows something, it is easier to have Faith because it is no longer a belief, it is Truth.  ‘T’ and ‘t’ both represent a Cross in Man’s psyche, which is also subconsciously connected to Truth by the same Letter.  The Significance of Trinity’s name is not a coincidence, as it represents ‘the Son, the Father, and the Holy Spirit’.

It also Presents another philosophical/theological Idea about the Message of the Christian doctrines, but let Us not get ahead of Our Selves.  Neo is still dead.

Other Classic Stories come to Mind as Trinity leans over to kiss Neo; the Princess that kisses the toad (or was it a frog?), ‘Sleeping Beauty’, and I’m sure there are many more.  The more One pays attention to how often these Themes have been Presented in popular Stories, the more One can develop a comprehensive understanding of their meaning and what kind of Doors may be Opening in Man’s psyche by the connection of new neural path Ways Presented by these Ideas.

Shortly after the kiss, Neo takes a deep breath, and the camera cuts to the ECG monitor, which shows a circled number 2 (Door) in the upper left hand corner of the monitor.  This is also the Second time in the Film that Trinity’s belief in Neo has Saved Him from death.

The ‘alternate’ Theme Presented here contrary to the typical Christian doctrines, is whether or not Christ returns to Life because of the Love and belief of His disciples, or because He said He would.  I’m not sure if I’m articulating this effectively, but essentially, I am as King if the message of Christ rising from the dead is to suggest Christ was Special and Magical, or if the real message was to demonstrate that We each have the Power of Christ within Us, and that the Will and Love of Christ’s disciples were the Cause of Christ’s return from the dead.  It seems to Me that the real message was to convey that the disciples of Christ had Mastered His teachings, and His return was a demonstration of their Magic and ‘Faith’ (Knowledge) of God’s (and Christ’s) Love for them all, His infinite Power to Perform Miraculous Acts, and in their belief of the Words of Christ Him Self, and His Promise He would return to them.

Although there is no Quest-Ion that the Matrix Presents many Christian Themes, One may also take this opportunity to consider if the Christ Character is actually Neo.  At the moment, it would seem that Trinity brings Neo back to Life, which was a Miracle Christ was well known to perform.  I mention this because both of My favourite movies are by the Wachowski’s, The Matrix [Trilogy] and ‘V for Vendetta’, and each of them Present the Christ Character as both male and female.  A perfect balance between the Two is the Middle Path, the Door Way to Salvation.

Evie is just as essential as ‘V’ in V for Vendetta and was actually the True Hero of the film because without Her, ‘V’s Vision for Man could never have been known.  Evie also goes through an ‘Ego’ death similar to Neo’s transformation in the Matrix, and Evie’s ‘old Self’ must die before She is able to Play her Part on the world’s Stage.  One could say the same of the Matrix, as without Trinity, Neo may never have returned from the dead, We don’t really know.  But the film certainly implies it was Trinity’s Love for Neo that resurrected Him from death.

When Neo returns, the transformation is complete.  Neo’s shadow Self has been realized and Neo is now embracing His Destiny – if not for His Self, for the Love of His crew and their Love and belief in Him (perhaps Trinity especially).  The Agents notice Neo rise to His feet and turn to shoot, this time Neo simply says, “No.”

It can’t happen, death is no longer a reality for Him and the bullets stop in mid-air.  Neo plucks a bullet from the air before the rest fall to the ground with merely a glance. 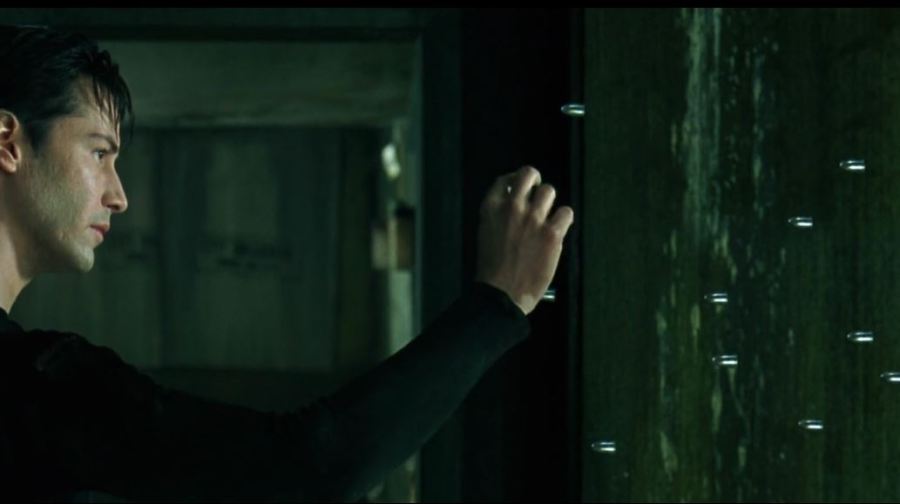 For the first time, Neo sees right through Man’s Matrix and the Agents become nothing more than a Visual computer program.  The bullets represent the corporate statutes and policies that stand as truth in Man’s Current Fiction of Law; it’s just a Program.  The entire commercial fiction is just an Idea accepted by the collective as Truth.  It’s the Matrix We Live in now.

Neo literally consumes Agent Smith from the inside out, also symbolic of True Power coming from within.  Neo disturbs the entire Program, even the hallways warp and wobble as if the entire system Will collapse.  The remaining Agents run.

Neo hears the phone ringing and is reminded He needs to get back, returning just in time before the electro magnetic shock is deployed to destroy the Sentinels attacking the Nebuchadnezzar.  Neo and Trinity are United in the ‘real’ world by a kiss before a final monologue is delivered by Neo to End the First Film in the Trilogy.

Next week, I Will use Neo’s final monologue from the film to summarize the message of the first Matrix movie and summarize the de-Coding of Man’s Current Matrix, and why this Film has been particularly Significant for Me in My Microcosm.  Until then, thank You all so much for joining Me on this adventure and for all the support for both these Posts, and those dedicated to Magick.

I appreciate every One of You.