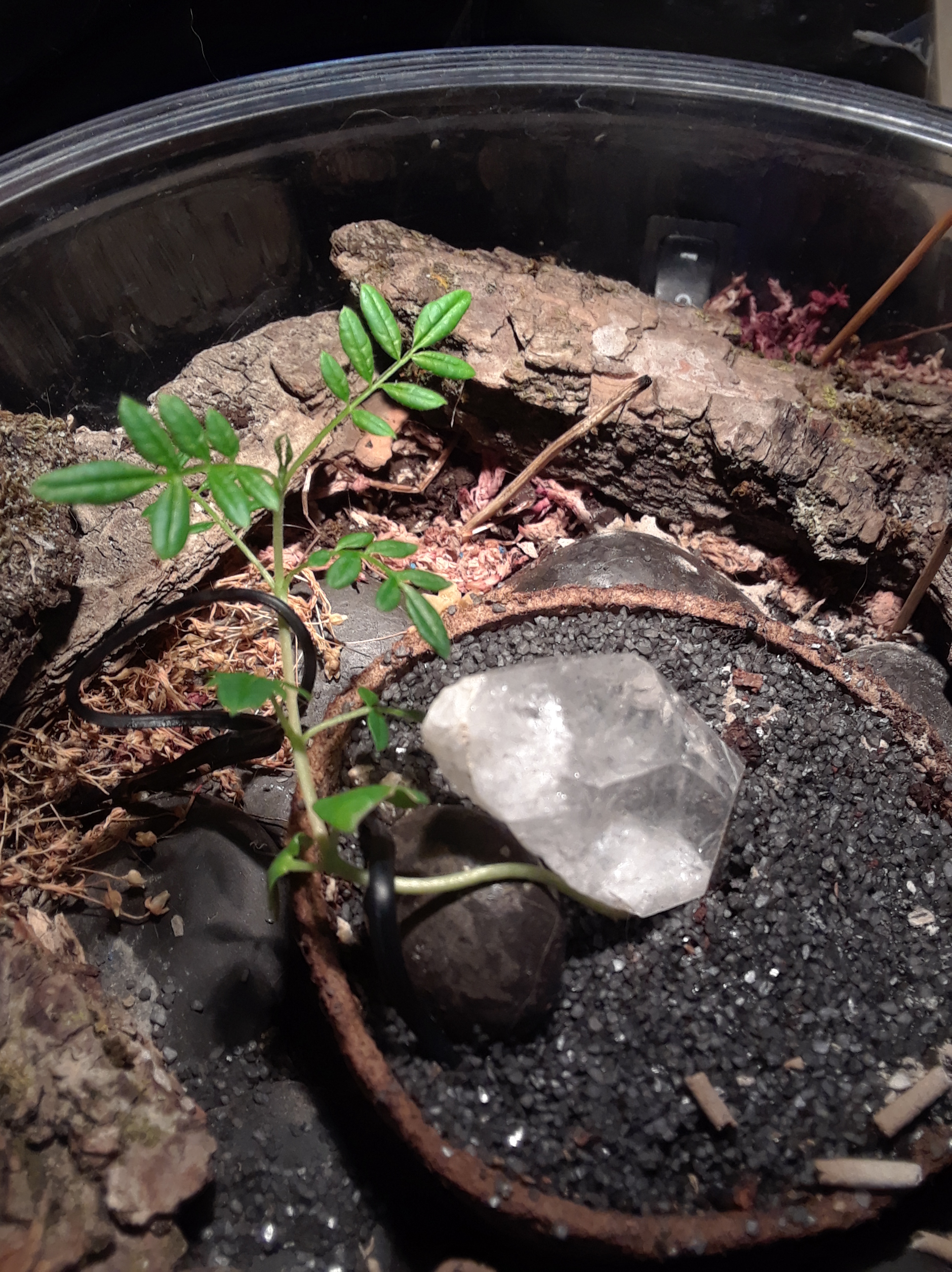 Hello every One, and welcome to the Simple Solutions Saturday Edition.  Today I Will be tall King more about why I chose to withdraw My application to the Divisional Court, and I am also thing King it is in perfect Harmony with some Simple Solutions for this Saturday’s Edition.

Today’s photo shows just how receptive My little Jacaranda Mimosifolia Bonsai is to the redirection of Energy. 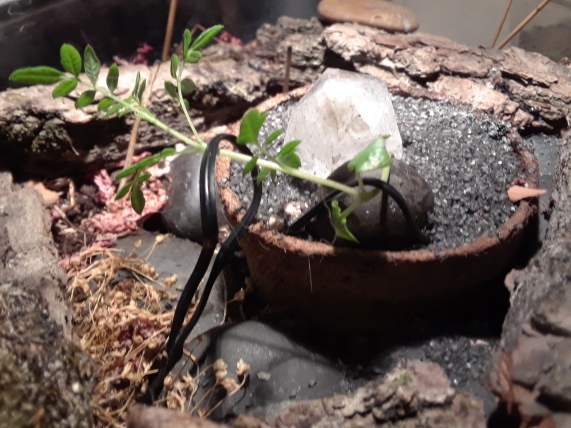 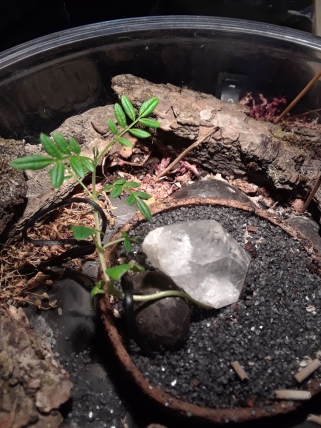 And some People are thing King that Plants aren’t conscious!  That’s ONE night!  It now looks just as comfortable as it did before the new twist.  Sunflowers follow the Sun across the sky.  Before I go off on too much of a tangent, the point is that the Microcosm reflects the Macrocosm, and the new bend of My Bonsai represents in My Microcosm, the redirection of My Energy in Man’s Macrocosm.

There are a couple of other very encouraging Signs in My Microcosm ever since I moved into My new Space.  I started a Pinterest account in February of this year because I heard it was a great Way to promote Blog content.  I was gaining somewhere around 3 new followers a day in beginning and it was gradually increasing, but not in any Significant Way.  It has been providing a lot of Blog traffic for Me though (roughly twice as much as Twitter, and I have +5000 Twitter followers), and although I don’t spend any time on marketing, I ‘Pin’ every Blog Post with a photo.  I was approaching 400 followers at the beginning of July, and was hoping I might reach 500 by the end of the month.

I started gaining fifty or more followers a day.  I just took it as a Sign that the Universe approves of My new space.  But that number has continued to increase and I’m now at 4,313 and gaining over 100 new followers a day!  So I feel obliged to say Thank You to the Universe.  I felt it was also appropriate to be tall King about it now because the real Good News here, is that My social influence is increasing.  The Microcosm reflects the Macrocosm in all things.  My growing influence on social media is a reflection of My growing influence in both My Microcosm and Man’s Macrocosm, or the Conscious Collective.  I might be gaining as many as 200 a day now, I’m not even sure.  I was only approaching 4,000 followers when I Writ My Post yesterday.  By the end of the week, every Blog Post Will have a reach of over 10k!  I really am a modest dude, so that’s pretty Mind blowing for Me!  That doesn’t take into consideration how many followers some of My Twitter followers have if they decided to ‘retweet’ one of My Posts.  Some weeks, I’ve ‘reached’ over 500,000 People.  This is starting to feel like quite the little communication hub I’m Creating! 😀  Anyway, thank You all very kindly!!!

I also hope this helps to understand why I am so Grateful to have You here.  The Greatest Gift to an Author, is to have People appreciate and enjoy the Writing – that’s the whole Point, really.  Nothing in the Universe I could ever Wish to accomplish could ever be achieved without You.  We can’t possibly hope to accomplish Peace if We can’t begin to Visual Eyes every One war King together. 😉

Resuming My reasons to withdraw My application to the Divisional Court, for Part II, I am going to be tall King about some of the Words of the last email from ‘the city’ to Show how My interpretation of events from the meeting were reflected in the Language of the Letter.

We discussed how offended I am by the final determination that My ‘overall actions and behaviour were a risk to staff and/or clients of the facility’, and that it was unreasonable for One to accept such a statement without characterizing what behaviour was considered to be a risk to staff and/or clients (because otherwise, without proof it is libel).  Here is the Writ summarizing ‘the city’s response.

“To this end You were to review Shelley’s apology Letter”

Keep in Mind that the Language used by lawyers is always careful and deliberate.  One of the other problems with Man’s fiction of Law, is that One of the first things One should do if they have wronged another is apologize for the Act-Ion.  In Man’s fiction of Law, that would be the last thing a lawyer would advise someone to do.  Why?  Because it is an admission of guilt.  One has no need to apologize if One has done nothing wrong.  Shelley was strictly communicating the final Word Given by the Salvation Army to Housing Services in regards to the Matter and was tasked with putting it in Writing.

Apologizing also implies a level of Trust.  Geneviève Trusts that I won’t proceed with My application if I am confident that Housing Services was Acting as an impartial tribunal communicating the findings of their investigation in their determinations.  (No ill intent, these are the claims of the Salvation Army, not Us).  That was also My promise to Geneviève (the city).

In My reply, I assured the city no further apology was necessary.

“I confirmed that all I can do is tell them this is what You are looking for from them but I cannot compel them to do anything as this is between You and the Salvation Army.”

This summarizes a great deal of My interpretation of My meeting with the city.  The Key Words here are “I cannot compel them to do anything”, and “this is between You and the Salvation Army”.

It really doesn’t get a whole lot plainer than that.  The apology recognizes wrong doing but not by the city.  ‘I cannot compel them to do anything’, is a kind Way of saying We have tried to get the information You’ve requested, the Salvation Army is not Willing to provide the information.

I could be wrong about this, but I had kind of been under the impression that because the Salvation Army’s continued funding depends on being in compliance with the shelter standards set out by the city, ‘the city’ would very much have the authority to ‘demand’ any information they Wish.  Now I don’t believe that they do.  I believe ‘the city’ only has the legal ‘right’ and authority to ensure the Salvation Army comply with the standards exclusively.  I believe the Salvation Army refused to provide as much information as they were able to get away with unless it was specifically related to the standards, and this was very much reflected in the final determinations made by the city of Ottawa as well.

“You feel People don’t respond to Your Letters and that You have Ideas and Lived experiences You would like to share with elected officials.  You felt Judicial Review was needed for some One to pay attention.”

Now, One could perceive the next comment to be a little condescending:

“I told You that I was of the opinion that a court proceeding is not the best way to be heard and to effect changes to the standards.”

But it’s a fair statement because it was said in the meeting.  I reminded Geneviève that I agree with her opinion, and that if city council or Housing Services had responded appropriately ‘ab initio’ (Latin, meaning ‘from the beginning), I would not have been compelled to file an application to the Divisional Court and none of Us would be here.  It would also be My preference that it not be necessary in the future.  Then, Geneviève mentioned the following points:

“Attending at committee when Shelter Standards are presented to committee for review and approval (this Will likely be spring of 2020, I Will provide specific date and time when they are set).”

“Councillor Catherine McKenney is the special liaison on Housing and Homelessness (You can cc Me if You like).”

In the meeting, the message was conveyed a little differently.  Geneviève assured Me that city council Will respond to any future Letters, and I am free to ‘cc’ Geneviève for assurance.  Geneviève also offered to assist with directing My concerns to the appropriate representatives on council (to deal with the specific Issues I have raised).

Wow, there’s more to go over here than I thought, so I Will continue tomorrow, hopefully to complete this little mini-series.  For now, I hope You are all having a Wonder-Full weekend.