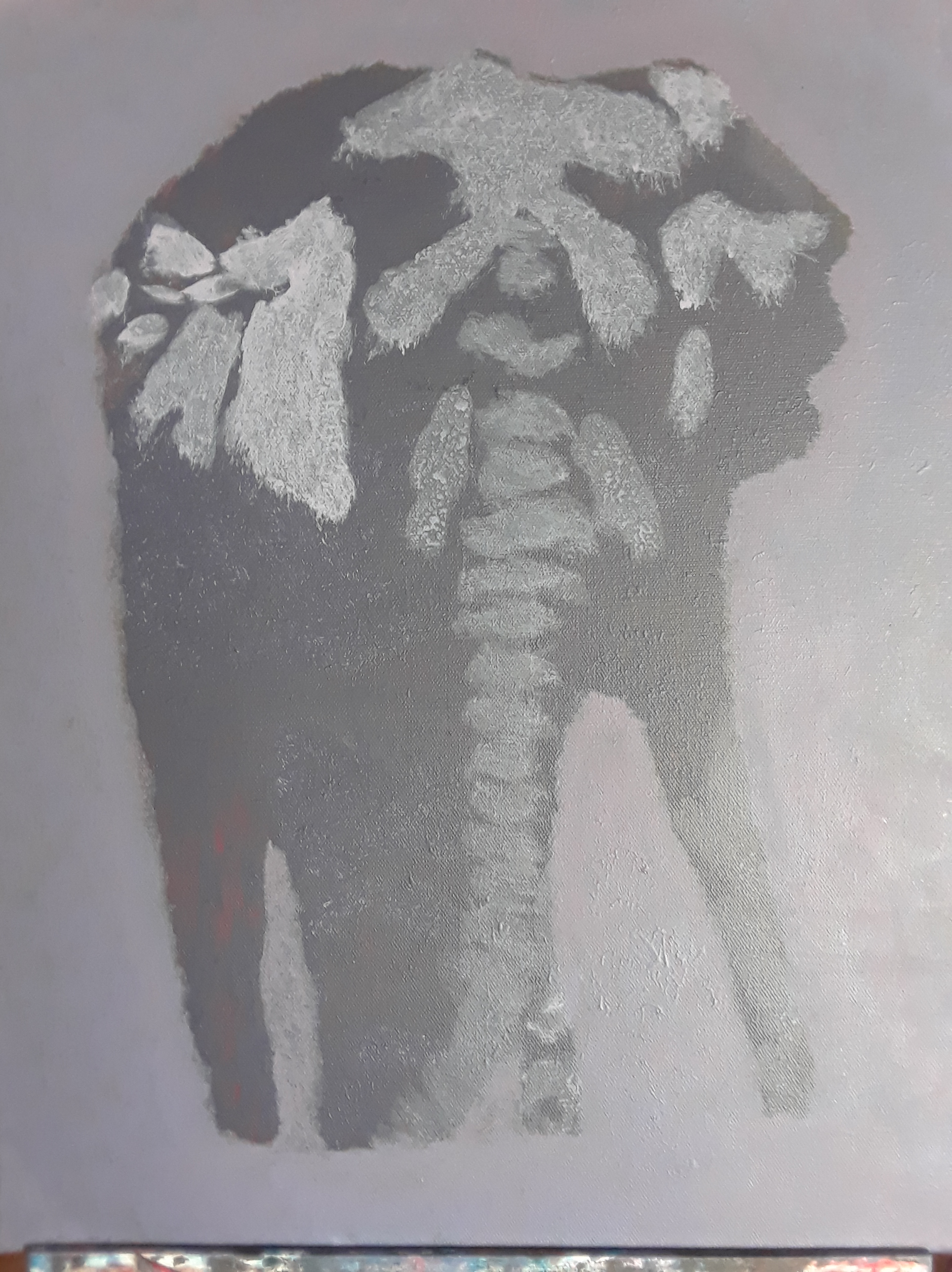 Hello every One and welcome to the Witches, Wizards and Warlocks Lucky Wednesday Edition, thank King or Queen You for joining Me – You make hosting from My House that much more Magical.

On one Hand, I suppose I could say that nothing especially Lucky took place in My microcosm today, yet I am feeling very Fortunate and thank-Full for all of My most recent Blessings.

Today’s feature photo is a reflection of just one of the things I am very thank Full for this Wednesday, and why the day feels Lucky. I have a permanent Art Studio, officially. That’s where an Artist would be war King out of, right? So this is the Artist’s Office.

Why do I feel so Lucky about this? Well, the Title of today’s Post is not a coincidence, either. I like to Play with My Words a little, and I consider My greatest Creative/Artistic Gift to be Writing, not Painting. Having the proper space, lighting, and ambience can make all the difference in the world when it comes to being inspired to Create.

I mentioned that one of the first things I really liked about My new apartment is that it immediately reminded Me of My favourite apartment in Vancouver. I was essentially as financially wealthy as I had ever aspired to become, was able to be war King minimal shifts as a bartender and have enough to pay My bills, and because I was a bartender in a very busy restaurant, I always had some cash on hand. It left Me with plenty of free time for painting and a beautiful environment to be war King in. It was as if the apartment itself Magically motivated Me to paint, and I would guess I probably completed most of My paintings while I was living there (or at least more paintings per day/month than most other periods of My Life). My new ‘Studio’ apartment is much the same, and that’s exactly what it feels like – My own Art Studio and an apartment in one – though that’s still not all!

I also have the ‘Write’ office space for war King on Blog Posts or other important Writing. This is much more appropriate for Hosting guests who Wish to visit House von Dehn here on My Blog because I’m in the right head-space. I also feel more comfortable with My House being ‘Officially’ in Order. I considered moving the desk into the bedroom to make it feel like more of an office and to separate business from Pleasure and My recreational pursuits. I’m the kind of individual who likes to switch things up once in a while anyway, so I’m sure I Will try all kinds of arrangements over time, but for now I really like having the Art Studio right beside Me. A lot of the information I’m reviewing online is in audio or video format and I don’t generally have the patience to watch a video from beginning to end unless it’s necessary – I’ll often turn it up and walk away from the computer to do other mundane things if I’m not taking notes. Recently, I’ve found that with the Art Studio right beside My desk, if I’m listening to a YouTube video that does not require My eyes, I find My Self standing in front of whatever painting is on My easel and dabbing away at it. If I hear something important, My desk and notepad are right there for Me to put the brush down and take a few notes.

And of course, one can’t very well have an Art Studio and Office without an executive washroom.

Probably just a coincidence that My shower curtain and bath mat match perfectly (sarcasm, there is no such thing as coincidence, only the illusion of coincidence). Honestly, the only time I have been Blessed enough to enjoy a bathroom this nice (the tub is like a jacuzzi sans jets) was in fancy hotels or My mum’s home. In fact, I am thing King My tub might even be a little nicer than My mum’s!!!

I wasn’t really planning on a Virtual tour of My new home but I suppose We still have the kitchen and bedroom to cover, so I’ll leave that for the ‘official’ apartment tour on another day. I still have some blinds to put up in the bedroom.

The other reason today was ‘Lucky’ is because it was a Wednesday that I had Promised Ottawa’s criminally and civilly negligent health officer that if she did not respond to the Notices that Default Judgement ‘Nihil Dicit, Res Judicata’ would be awarded against her for her medical fraud and violations of Canadian and international Law. It was also a Wednesday two weeks ago, October 28th that Vera Etches was advised default judgment Will be awarded against her, so I have Gifted her with a very generous time extension and she still failed to respond to the charges against her! Like seriously, how arrogant and incompetent are these People, and is there any One within Canada’s government who Will Honour their Oath of office, or are they all just treasonous traitors serving corporate, globalist interests and big pharma?

Sadly, I don’t have an answer for You on that one, but We are going to be war King on finding out! Yes, I may not have the ‘power’ to physically arrest treasonous traitors like Vera Etches My Self, but I can begin as King for the appropriate authorities to do so, and adding their names to the list of conspirators aiding and abetting her crimes if they fail to assist Me in bringing this treasonous traitor to justice. This ‘lady’ (I perceive the Word ‘lady’ to be an honourable Man of the female kind, so I feel it’s a bit of a generous title for a woman abdicating her duties as both a health officer and public servant, but I don’t Wish to stoop to her level, either) Wishes to Play Russian Roulette with My Life? Excuse My language, but who the fuck is she thing King she is? Canadian government should know these vaccines are potentially lethal, and injecting Me is not only an assault upon My inherent rights, it is a direct assault upon My Life and what I perceive to be attempted manslaughter – and that is the criminal charge any individual imposing these jabs upon Me under duress Will be subject to. I’m also charging the city of Ottawa and Vera Etches specifically $1,000,000.00 per day for discriminating against Me and other healthy, unvaccinated individuals in the city of Ottawa, and for inciting hatred toward Me and others for being unvaccinated within Our own communities. This is medical apartheid by definition, and it is absolutely an abomination on the reputation of the Crown and Her Majesty.

You can find the Notice of Default Judgment Issued against Vera Etches here. You can tell how corrupt these People are by their silence – any Honourable individual with an ounce of integrity would respond and explain their position. Vera Etches is a fraud and a shill for big pharma and We need to get these imposters OUT of office as soon as possible.

As far as all of that is concerned, I have contacted the Justice Center for Constitutional Freedoms and Will be as King of them if We can put together a class action suit if I am unable to get anything done on My own. However, I am going to forward the Notices of Civil and Criminal Liability to a few law enforcement officers in the city of Ottawa and see how We make out with that first. Either We Will make some progress, or I Will have a few more elected officialls God is officially displeased with to add to My growing list of Canadian criminals posing as elected officials.

Post Script – Oh, the main reason I Wished to share today’s feature photo with You is because I am experimenting with a new painting technique. Generally, My paintings appear almost perfectly flat. My plan for this canvas is to use many layers of paint applied with a stippling technique (just kind of dabbing spots all over the place) so that there is perceivable depth as well as colour gradation. I’m not sure how well the technique Will work, but I’ve been having tons of fun with it and am eager to get back to it. So I feel pretty Lucky to not only have a beautiful Art Studio for war King in, but also to be inspired enough to have lots of things to be war King on!