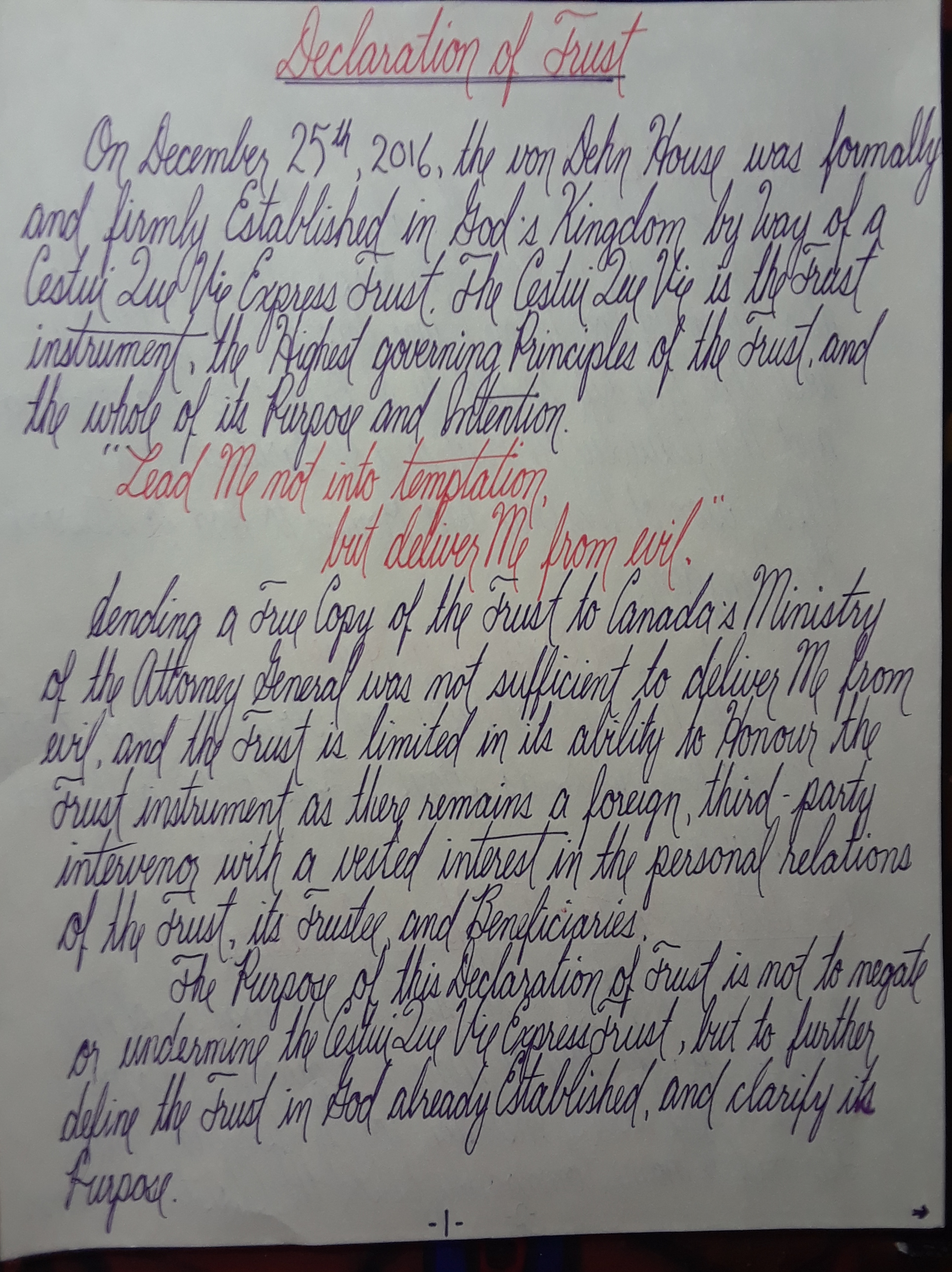 Hello every One and welcome to the Thursday Thing King Edition of the Good News Journal, thank King or Queen You for joining Me. There are plenty of things I have been thing King about and it is always a Pleasure to have You in My House. The first Gift I Wish to share with You is My Declaration of Trust (or Declare-a-Sean in My case), though I Will also be tall King about ‘Authenticate-Sean’ (authentication) and ‘Redempt-Sean’ (redemption, or to redeem Sean). I also have some new emails to share with You today and other ‘Good News’ tidbits to share. Let’s get right into it!

First, the ‘Declaration of Trust’:

That’s as detailed and comprehensive an ex-Plan-a-Sean as I am thing King any One Will need. Although it was Writ with intent to clearly articulate the nature of the Trust for relative individuals within Canada’s government, it was also Writ with the intent that a child should be able to comprehend the contents. My future heirs and successors Will never be allowed to forget how Valuable they are to God’s Plan.

These documents were Created primarily for the benefit of My Estate and its future successor Trustees and Beneficiaries, and I was thing King that a concise, short description was also necessary for ease of reference.

I do hope You Will take some time to check out both of the above documents, as I sincerely believe the information contained within is perhaps some of the most Valuable I have shared to date (or at the very least as valuable, except conveniently condensed into two documents). These quite literally define the laws and obligations of the Trust. It is the obligations of the Honourable Trustee that allow for the issuance of bonds to fulfill the Trust’s Fiduciary obligations to its Beneficiaries. This is exactly how the Public Trust of every country works, issuing bonds to fulfill obligations the nation has to its People relative to the legislative Acts they’ve Created to govern the [Public] Trust assets. See, international commerce and economics isn’t so difficult to comprehend, is it? No – the devil is in the details (codes, statutes, Acts…).

Okay, so I really am Thrilled to finally have the opportunity to share that with You. A copy of the Trust Declaration and the Letter I shared with You yesterday was sent to the Ontario Works administrator via Tatiana Lindstrom yesterday afternoon. There is no excuse, or even the opportunity to confuse Me with any artificial person or whatever else the Canadian government may Wish to call ‘Sean von Dehn’ – whatever that is, it’s been placed in Trust and I am now Acting as Power of Attorney and Executor of that person’s Estate.

Any One who has read this Blog for any length of time Will know that I don’t believe in coincidences – in fact, I would go as far as to say I know they don’t exist, only the illusion of coincidence exists. I was wondering if I should be tall King with You about what it is they actually do and what is placed in Trust. See, there are always two parts to a property claim – the Title and the property. The Live Birth Record is the Title of the property, but what is the ‘Real’ property?

Well, today someone was reading this Post, ‘The Creation of Babylon‘, which explains exactly what it is they do. Now, I don’t know if its been proven, but it is what I believe they do, and it was a Man by the name of Kurtis that I first heard mention the Idea – all I know for sure, is that whatever the ‘Real’ Estate property is, it is not the individual. How do I know this for sure? Because if it were, it would be a document evidencing a slave contract because the individual would be a ‘bonded and indentured servant’.

It is Magic because this non-living decedent Will in fact be worth something if the Living Man can be summoned as a Holy Ghost to stand in for this artificial person. And if the Living Man should ever be wise enough to figure things out, well that Will be worth something, too, won’t it? In fact, that might be worth enough to settle all debts. Are We to believe they were thing King that no One would ever figure this out? Of course not – they were banking on it.

I also managed to get a few other things done today and kept My Promises of yesterday. I have updated My Public Notices Page for State Actors trespassing upon the inherent rights of Canada’s People with My latest email to Mary Simon. I also managed to update the von Dehn Family Manor Roll with the latest developments in the Estate Matter of My father and Noah Potechin. You Will also find My emails to the sales representative Giving her Notice of unlawful sale of property.

Alright, My main Wish was to make sure I remembered to share all those updates with You today, as I have been busy. Getting all of these documents officially onto the Public Record was the main priority for My Kingdom this year. They represent something of a launching pad for the next five years.

Something else I Wish to be tall King with You before I Sign off today relates to ‘a process’ known as ‘authentication of the Live Birth Record’. It’s one of those online guru things about correcting One’s legal status from the artificial person to natural person, and the first step of this process is to ‘authenticate the Record of Live Birth’. This is also why this Blog and what I am sharing with You here is so unique – because I do not listen to any One when it comes to instruct-Sean on how to ‘authenticate‘ who and what I am.

The Idea, is that the individual is claiming that ‘Title’ back and Giving Notice that the Title (name) belongs to a Living Man who proves he is Living by Way of a thumbprint Seal. Then the document is returned to the government where the application was made by Way of registered mail, placing the Title back into the Trust of the government, which now allegedly represents a Living Man.

I strongly advise against this. Now, One may disagree with Me or not, but I’m sharing this with You deliberately to let You know that in My own Microcosm I have become somewhat known in what might be called a right of Self determination movement. I just Call it a desire for Freedom but it’s a sentiment that is continuing to grow – I’ve even Noticed Viva Frei seems to be catching the fever. I’m also letting You know I don’t advocate for anything I don’t absolutely believe in and would do My Self. Advising against authenticating the Live Birth Record is what I am most Commonly criticized for, and I am letting You know I stand on that belief.

What is most important with respect to the right of Self determination and Living a Purpose Full Life, is knowing why One is doing something. What is One hoping to ‘authenticate’? Some fictional Idea for the use of One’s name that has nothing at all to do with the Purpose of One’s Life? Don’t get Me wrong, I’m not suggesting One does not have the right to tell another they are not allowed to use their name, I have done exactly that. What I am suggesting is that whatever it is the government Created, whatever the ‘Record of Live Birth’ is, it was not Created by My Hand, it is not My property, and I have no right to claim it or deface it in any Way. I only have a legitimate Claim upon the Title (My name), and the Real Estate property that Title identifies (My Life Story).

Just for the sake of letting You know about something else I have heard People do that is similar to the authentication of the Live Birth Record process, is the very same concept, except with an additional, authentic Gold or Silver coin. Now, if People do this and understand what they are doing, this minute difference can make all the difference – it’s all relative to whether or not One understands what One is doing.

The Silver or Gold replaces the original corpus of the Public Trust (the Caul, or Calling/afterbirth) which represents the physical property of the Estate that the Live Birth Record Titles. So now, there is a piece of silver or gold as Real Estate property held in Trust by the government for the individual’s benefit which is now identified as a natural person with a beneficial interest in the Titled Estate. Anything of Real Value is sufficient to satisfy any debt obligation.

Alright, that’s all for this Thrilling Thursday because We are already at 1500 Words! The Key thing I Wish to communicate in this Post is that everything relates to Trust Law. I have never been more sure of the Actions I have taken than I am now, and I Will assert that Creating One’s own Trust is the only Authentic Way to be the Hero of One’s own Story.

I also have a new email to the City of Ottawa but it has been such an action packed day already, We’ll save that for Free-Lance Friday’s Edition.