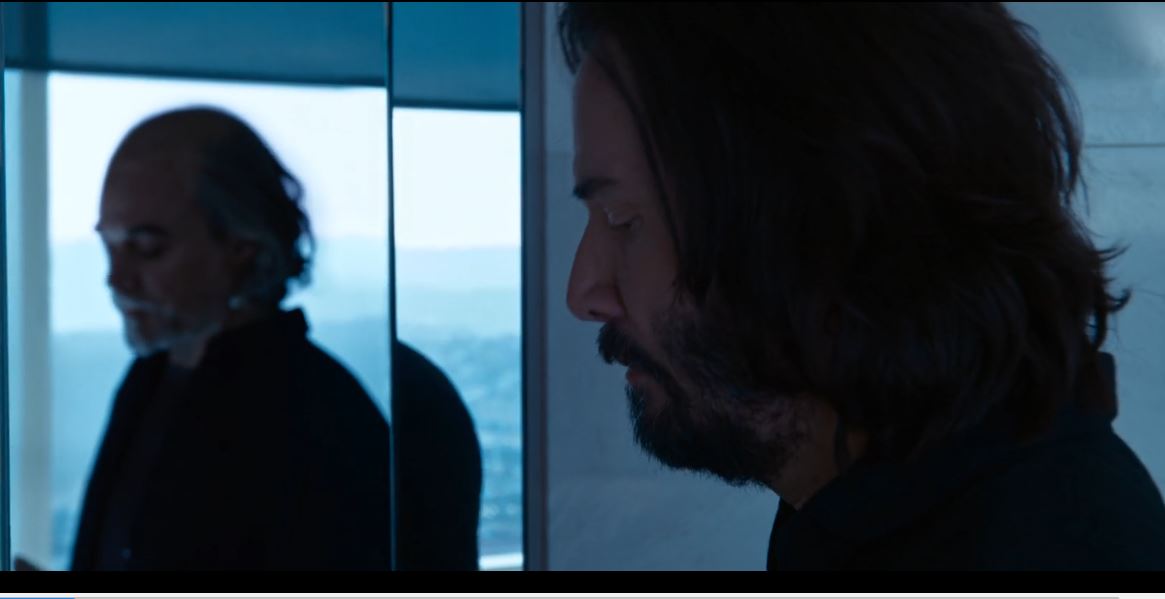 Hello every One, and welcome back to the Tuesday Tell a Vision Edition, ‘Matrix Resurrections IV De-Coded‘ Series, Part IX. I have been anxious to get back to this Interpret-a-Sean because this film is loaded with inform-a-Sean about Our current world, and how the Stage has been Set for the climax of Universal Pictures greatest Present a Sean. Some of the events in the film are so relevant to My Microcosm that I did not Wish to be tall King about them until those events had Played out. The relevance Will become apparent as We continue war King Our Way through this Interpret-a-Sean, so let’s get right back into it. When We left off last week, ‘Mr. Anderson‘ was on his Way to see the psychiatrist.

The Scene opens with the camera panning from Mr. Anderson’s fidgeting hands to his face, and I Wish to once again point out the emphasis on the colour blue. I’ve said that blue represents the commercial, civil law; the codes, statutes and Acts of commercial admiralty. A colour of Law for a shade (hue) of Man, the ‘hu-Man’ being a person. Blue also represents blood deprived of oxygen, persons that are drowning in debt. Red represents oxygenated blood, the Will and the Way, the Breath of Life Given by God that animates the body and True Character of the [Real] Man. The psychiatrist is as King Mr. Anderson what he was feeling when he hallucinated the lips of his boss sewn shut in the previous Scene.

“I felt I’m either having a mental break down again… Or, I’m living in a computer generated reality that has imprisoned Me – again.” (laughs nervously).

It’s pretty clear that the use of blue is not arbitrary, it is something the producers and directors Wish to make obvious to the audience.

“Not much of a choice, is it? Maybe it’s not as binary as that.”

Do You see how this film is using terms that have become social issues for the mainstream media and their new ‘woke’ agenda? There is a lot of tall King about ‘binary’ and ‘non-binary’ programming, People Self identify as ‘non-binary’. But that’s probably just a coincidence, right? It could be, until We real eyes there is no such thing as coincidence, only the illusion of coincidence.

The psychiatrist tells Mr. Anderson that his hallucination was a breakthrough, that he is using his past trauma experiences to defend him Self in the same Way he believed he was attacked. He is projecting what was done to him onto his boss when Presented with Ideas he finds harmful to his Character or beliefs. Mr. Anderson seems relieved that the psychiatrist is not telling him he’s lost his Mind (again), and confirms that he requires a refill of his prescription. I put the Word in italics to consider what the Word actually means; ‘pre-script-ion’. Why a ‘pre’ Script-Ion, and not a Scription? Spell check doesn’t even like the Word, ‘scription’, but how can there be a pre-scription if there is no Script-Ion? The pre-Script-Ion is to Keep People Acting as persons – it is necessary for every One to Play their Part on the world stage. If One begins thing King this world is cruel and unkind, there is a prescription for that. It’s much easier to Give some One a pill to make them feel better than it is to address the problem causing the unhappiness in the first place. The ‘pre’-Script-ion is to Keep One from performing their own internal system diagnostics and Writing their own Script – that would be tragic because that Will make One the author-Writ-E (E=MC2,‘Ion’ is a unit of Energy) of their dia-gnosis (gnosis=knowledge of Spiritual mysteries).

In the above photo, the mirror Shows us what Mr. Anderson really looks like to every One else, versus how he perceives him Self. And of course, the pills are blue, too.

The film’s thematic musical score, ‘White Rabbit’, sets in as Mr. Anderson begins the repeat loop so many of Man’s kind are familiar with. Get up, go to work, come home, check social media accounts, go to bed, repeat. Everything is not so subtly stained a shade of blue except a familiar face from Mr. Anderson’s ‘dream’, and We hear various interpret-a-Sean’s of what the first Matrix films were about.

The continuous use of blue in all the other Scenes helps to draw Our attention to the use of Red for the Oracle’s specs. None of these details are arbitrary, the Oracle represents Neo’s True Purpose, the Will and the Way. The use of Red is to catch Mr. Anderson’s attention to help wake him from his slumber. She also happens to be reading ‘Alice in Wonderland, Through the Looking Glass’.

It is also not a coincidence that We see Rays of [the Son’s (Neo)] light Illuminating her smile. These Ideas are war King in Man’s Mind subconsciously whether We are aware of them or not – that’s why they are called [tell a Vision] ‘programs’.

As the Song ‘White Rabbit’ comes to a close and fades out, We see that Mr. Anderson is loosing his Mind even though he is taking his prescription. He finally ‘cracks’ and decides to throw out the pills because they are not war King any more.

When I say that the Matrix films do not miss a single detail (though I likely miss many), it is no exaggerate-Sean! Here, We see all the Writing on the container is in ALL CAPS. We also see that the quantity of the bottle is 60 (6+0=6), and I have been tall King about how 6=9 is a major theme from the first film through to the finale. 6 is the number that represents, House, Home, Family, Peace, that sort of thing. 9 represents a dying age, the end of a sequence or series. Notice how the bottle is upside down, making the 6=9? The pills are supposed to make Mr. Anderson feel right at home in the Matrix, but it is really just keeping him inside a repeat loop so that he cannot complete the series… Trust Me, these little details are not coincidences, the 6=9 theme is prominent in many films, the Matrix series just happen to be the best example I know of.

Well, that’s 1000 Words and that’s about the perfect time to leave off. We know that Mr. Anderson has stopped taking the blue pills, which is the first step to finding the Red ones!

A small detail some may have missed, is that the Oracle can be seen Giving ‘Tiffany’ the Book, ‘Alice in Wonderland’ just before the Song comes to a close. Remember, the Oracle Gives every One exactly what they need to find their True purpose.