Hello everyone, and welcome to the Witches, Wizards and Warlocks Edition of The Good News Journal.  As always, thank You so much for being here, I have an unusually interesting Edition to share with You today.

I know, tall King about Trudeau’s troubles doesn’t exactly seem like something that would be fitting for a day dedicated to Magic, but there were so many synchronicities leading up to the Writing of this Post, I felt it was the perfect time to remind My readers that Magic is everywhere, even in politics.

I don’t usually discuss politics because I think most politicians are either idiots or Actors who Will do or say virtually anything to meet their only true objective; getting elected, or getting re-elected.  In fact, I often made jokes about how ‘parliament’ is a place for Parlour Games, nothing more than a Stage for Actors to put on a Good Show – entertainment purposes only.  And I do have serious doubts about whether any real progressive change can come from politics because the system is so fundamentally flawed.  However, sometimes the Actors can put on a Classic Comedy Show, even if at their own expense, and this week was no exception.

It all started with My Freelance Friday Post.  I had met with My Friend, BigRed473, and I had been tall King to him about Ideas for My Freelance Friday Edition, People I might like to interview, subjects I might like tall King about, or perhaps introducing an opinion column on trending topics and personalities.  The name Jordan Peterson came up and I mentioned to My Friend right away that he was one of the personalities I wanted to share some thoughts on.  My Friend Gave Me some Great advice –

When I returned home that day and sat down to Write, the Sun had published an article titled “IDIOCRACY: EXCLUSIVE- PETERSON RATES TRUDEAU’S CHILDISH REIGN”, and it just ‘happened’ to be the first thing to Show up in My Facebook feed.  I knew the Universe was war King it’s Magic, so I decided to take advantage, killing two birds with one stone; Jordan Peterson sharing My sentiments on Trudeau – how perfect!

Sometime shortly thereafter, someone posted Alexandria Ocasio-Cortez’s little ‘Lightning Round Game’ she played with members of congress and I thought it was genius – totally something I would do if I were in congress.  Then, Ben Shapiro Posts a video titled ‘Ben Shapiro DISMANTLES AOC’s New Green Plan“, and he was someone else I had wanted to share some thoughts on (for reasons I’ll get into another time), but it did inspire Me to Write a Post about ‘Idiocracy Politics‘, as it was becoming something of a theme for My week.

Then Trudeau gets hit with another hammer, an investigation into his involvement in a major scandal suggesting he interfered with judicial process by asking the [now former] Justice Minister, Right Honourable Jody Wilson-Raybould, to offer a deal to SNC-Lavalin, a large corporation facing bribery and other charges.

I started tracking this Story, cutting and pasting links into drafts so I could Write about it later, maybe My Freelance Friday Edition.  But I’m not sure how Facebook links work because the link I saved (which was an Ottawa Sun article) now links to a blank page (though still the Ottawa Sun).  It was a little disappointing to lose the link because things are working out so badly for Trudeau and all of it so serendipitously (well, for Me as a Writer reporting on the Story, not so much for Justin).

On Monday it was announced that there would be an investigation by the ethics commission into the whole scandalous affair, and Trudeau claimed he welcomed the investigation.  Because My original link no longer exists, You can read CTV’s account of the investigation here.  Then, it gets even better!

On Monday, Justin also suggested ‘the fact’ that Jody Wilson-Raybould did not tender her resignation from cabinet “speaks volumes”, (eluding of course, that if there had been any internal pressure, Wilson-Raybould would have resigned). 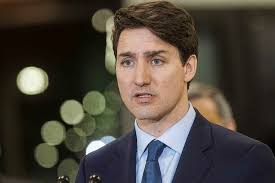 Now, the funny, Mystically Magical thing about that, is that I don’t know Jody Wilson-Raybould any more than I know Jordan Peterson, Justin Trudeau, Ben Shapiro or Alexandria Ocasio-Cortez…  But I do Trust My intuition, and I believe that Jody Wilson-Raybould is one of the Good guys – and I always have.

When I received My reply from the Attorney General’s office, I took a photo of the received document and Tweeted to Jody Wilson-Raybould ‘Thank You for the Honour, Your Honour!”…  Wilson-Raybould responded promptly only moments later with a cheerful “You’re welcome!!!” and a happy face.  I thought that was pretty cool.  So, admittedly, maybe I just really want to believe she’s one of the Good guys, but that’s how I feel until she proves Me wrong.

When I heard Justin claiming that Wilson-Raybould remaining on his cabinet ‘spoke volumes’ to his credibility, I said to My Friend, “Wouldn’t it be Great if she resigns right after Justin makes that statement?”

The next day, the Right Honourable Jody Wilson-Raybould tenders her letter of resignation and Published it on Twitter for all the world to see.  I couldn’t NOT be tall King about this in the Witches, Wizards and Warlocks Edition, because this is as much an example of how My Magical Universe works as anything else! 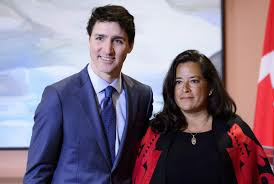 I also Showed some support for Jody Wilson-Raybould by Tweeting to her that I hope she resumes the position of Canada’s Justice Minister once Trudeau stands down and tenders his resignation.  I have also used the ‘new’ hashtag ‘StandWithJody’ to Show My support.  It might be worth noting that this is also the first time I’ve taken a firm stance on anything political but something more than intellect was as King of Me to Show My support.

Again, I don’t usually get involved in politics but for Justice to work, We need to believe that there are Good People out there, and My instincts tell Me Wilson-Raybould is one of them.  If all Justices, Judges and elected officials are corrupt, it really doesn’t matter how much knowledge of the law One has, it isn’t going to give Us Justice – We Will be stuck with ‘Just-is’.

On Monday, Trudeau said Wilson-Raybould’s continued presence in cabinet “speaks volumes.” It was another way of saying “nothing to see here folks.” Then on Tuesday she quits cabinet. So much for that. – Anthony Furey, Ottawa Sun

I hope everyone has enjoyed this Wednesday’s Witches, Wizards and Warlocks Edition.  I don’t want to bore My audience with politics but it really is more like a circus Show sometimes so I hope You Will find the antics at least mildly entertaining.

On a lighter note, I was Gifted with one other little Miracle this week.  My new theme allows Me to Keep a YouTube Video posted on My Page and I had been thing King of something to Post that My mom might like.  Listening to Songs in the car (usually while I Sing) is one of those special moments We have with each other, so I was looking for a favourite she might enjoy.  In My Quest to find a Good Song, I was trying to remember what music I had put on a mixed CD I had made for My Mother years ago.  I didn’t have any luck remembering, but last night My Mother sent Me an e-mail telling Me about one of the Songs she’s been hearing a lot on the radio recently, and how it reminds her of Me and the CD I made for her.  So the feature YouTube Video on the right is a little Magic from Mom!