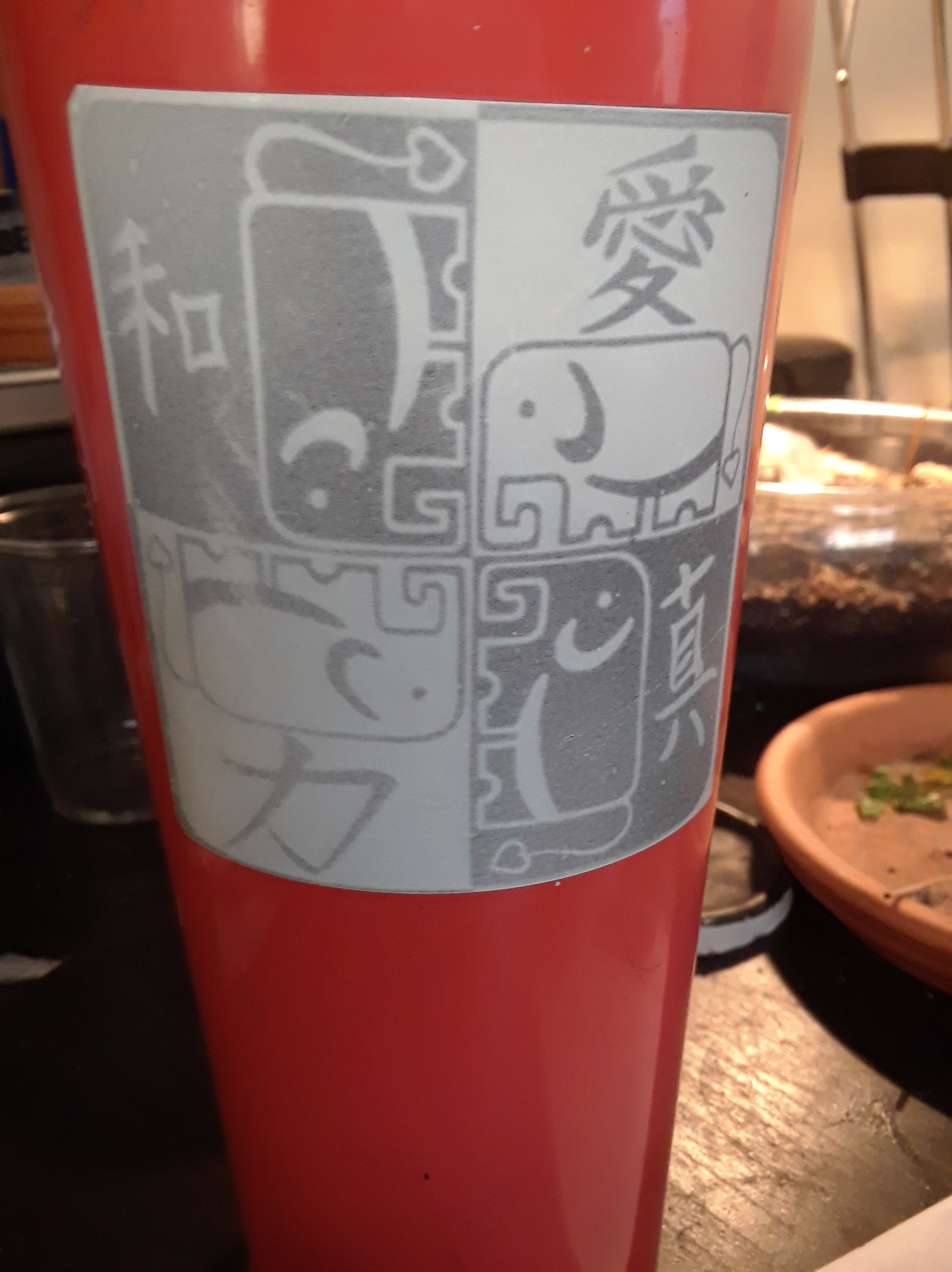 Hello every One, and welcome to the Magi Call Monday Edition of the Good News Journal, thank King You kindly for being here.  I am thing King I should manage to finish tall King about why I withdrew My application to the Division Court today and begin sharing some of My Ideas moving for Ward (Ward=protection).  For Parts I and II, just click on the appropriate Roman Numeral.

Today’s featured Image is the Flag of My House, von Dehn.  Yes, I did put some thought into the whole King thing, long before I Imaged I would ever make a Claim upon My Kingdom (or that it should ever be required).  I believed I should Create a Logo that reflected My Spirit and Life’s Purpose.  The Japanese symbols represent Peace, Love, Truth and Strength, the Spirit of the Elephant, which never forgets (God).  Four represents Foundation.  The Original was in Colour, as My Intention is to bring colour back to Man’s black and white fiction of law.  My Wish was to improve on the original design, but My decision to make this One black and white is because I had decided I would also use it in Man’s fiction, and any photocopies Will almost always be in black and white (in man’s legal fiction, I think that is the preference).  So in a Way, it’s kind of like a Virus in Man’s Matrix (legal fiction).  And where there is Will, there is a Way.  Interestingly enough, Neo’s ship in the final Matrix series is called the Logos. 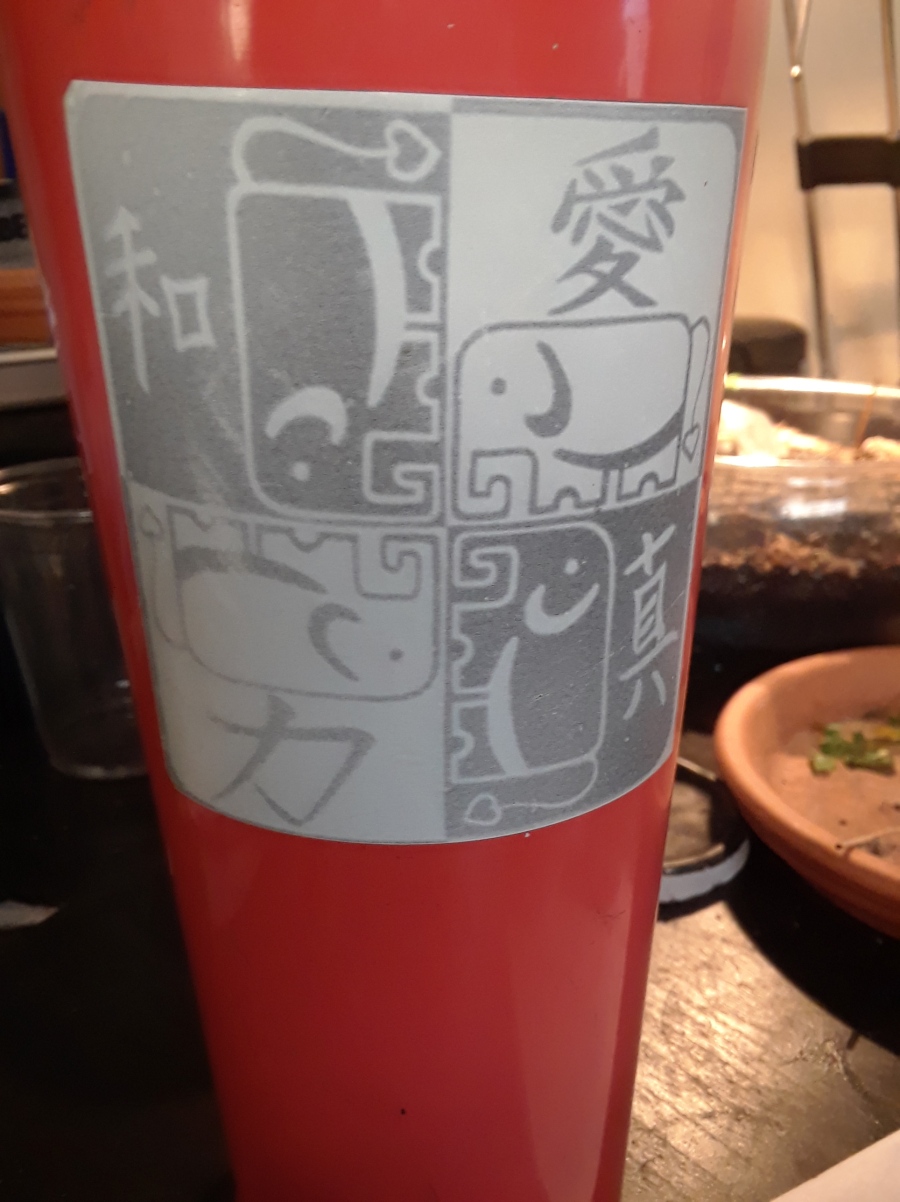 You can read the full context of the summary of My last meeting with the city of Ottawa by clicking on this sentence, otherwise I’m just going to pick up where I left off.  For Me, the Energy of the next statement (express Ion of the State’s Mind) was very Power full.

“You feel that the current rules requiring People to be chronically homeless in order to receive Housing Allowance is causing harm to People and that the priority should be to house People.” [Capitalization of ‘People’ is My Edit to original statement].

Well, I suppose no point in apologizing for something I am choosing to do any Way, because I have to repeat part of that for emphasis.

“The current rules requiring People to be chronically homeless in order to receive Housing Allowance are causing harm to People.”

Now really, is it reasonable to be thing King that anyone in Good moral conscious would try to argue that chronic homelessness does not cause harm to People?  I am thing King “NO!”.

Ottawa’s current market value for basic, single occupancy rent is $1253 this year (according to information provided by Housing Services).  Combined with the provincial allowance for housing, the total provision for housing for those on social assistance is $990. a month – and it has to include heat and hydro, otherwise the individual Will not be able to sustain it.  The real Key to the city acknowledging My concerns in the Letter, is the city’s response.

“I explained to You that one of the Provincial priorities was ending homelessness, and You are welcome to contact elected officials to provide Your opinion.”  “…  the rates are set by the province and City council not staff.  I explained that staff are not making policy decisions.”

These are Significant details for a more subtle reason.  There was a meeting of the Minds on several of My Issues when I met with the City.  It was as if they were in agreement, ‘but can only do so much’.  They can only work with what they have and whatever the province gives them in funding.  Essentially, the city is at the mercy of provincial budgets, and this (for now) is what the Province has decided to provide in funding for the Housing First model.  Again, My translation and not necessarily 100% true and accurate, but I think it’s a very reasonable interpretation.

The next statement is also pretty Power Full:

“You explained You believe that the Salvation Army violated Your rights and the rights of others by forcing People to participate in chapel as part of the programs.  You feel that You should be entitled to compensation for the infringement of Your rights.“

Well, one thing I can tell You that is absolutely True, is that every Man is very much entitled to compensation for the infringement of their rights.  The infringement of a right is considered a Form of harm in any Common Law jurisdiction.  Trespass is one of the most serious offences, and it comes in many Forms.  An assault is a form of trespass, violating One’s right to not be physically harmed.  The city is very careful about the language, because they concede that the Salvation Army was forcing People to participate in chapel service, there is simply no admission that this is in fact a Form of harm which would entitle One to compensation.  Trust Me, any lawyer Will know that it is, Geneviève, the city’s legal counsel, certainly knows it, too.

“I explained that I have no compensation to offer You and that the Issues You raised in Your complaint letter were taken seriously and have been addressed.  There are lessons learned and improvements as a result of Your complaint.”

That’s pretty huge, too.  There are “lessons learned”.  Again, the choice of Wording I find particularly interesting because one of the other things I had been tall King about very frankly, was that I believe Writing this Blog and teaching the People of Canada what the common law truly is, ‘My Plan’ (as proposed in My Letter to Caroline Hards) is My Duty and obligation to both God, the Queen, and the People of Canada.  And I was done with People presuming that this is not a Noble and Worthy (Value-Able) Way for One to govern One’s Life.

I’ll just quickly summarize the rest before the final paragraph.  The city offered to elicit more information from the Salvation Army about why I was barred, oversee shelter operators decision to have People denied access, and review the use of police force in the facility (when not required for real crimes).  The Salvation Army already has a security contract and they can usually diffuse most serious situations (and the individuals working for that organization were always very kind to Me, by the Way.  In fact, it was two security guards who were the first to contribute to My Artwork outside the shelter by supplying Me with a new canvas (thanks Kayla and Brent).  And yes, they support what I am doing here, too).

“You indicated that You are considering a tort claim instead of a judicial review.  I suggested You seek legal counsel on the matter and that I prefer We resolve the Issue as We are doing since I don’t believe the court process Will provide You with the result You are looking for which is change and improvements.”

I once took exception to the whole ‘I suggest You seek legal counsel’ thing, but I don’t anymore because I have since learnt that a lawyer is obliged to advise their adversary to seek legal counsel if they are not a member of the bar, potentially even if One had passed the bar in another jurisdiction.  Even lawyers are specific to their area of expertise, the city probably has over fifty lawyers in their legal department for various different specializations.

There are two things I like about the Wording of the last paragraph.  To resolve the Issue ‘as We are doing’, implies continuing to work together to resolve the Issues I have addressed as they were summarized in the email.  Although the city says it doesn’t think the court process Will provide Me with the ‘result I am looking for’, the city also defines what I am looking for as ‘change and improvements’.  It is not saying a tort claim against the city wouldn’t succeed, it is suggesting that’s not what I really Wish to do.  And that is also absolutely true.  The financial aspect of compensation for a tort is really the unfortunate manifestation of Man’s corporate fiction, it is used as a deterrent for corporations but it doesn’t undo any harm, it can’t actually fix anything – the harm is already done.

So that’s where I’m going to leave off this Magi’s Call Monday.  In My next Post I Will elaborate on why I don’t really Wish to file a tort claim against the city of Ottawa, though I am thing King some of You Will already know.

In other Good News for this Magi’s Call, My Pinterest account is still booming, I’m officially gaining roughly 125 new followers a day and it seems to be slowly increasing in momentum.  That’s really Good News for Me because it generates considerably more traffic for My Blog than Twitter.

I hope Your week is off to a Wonder Full start!