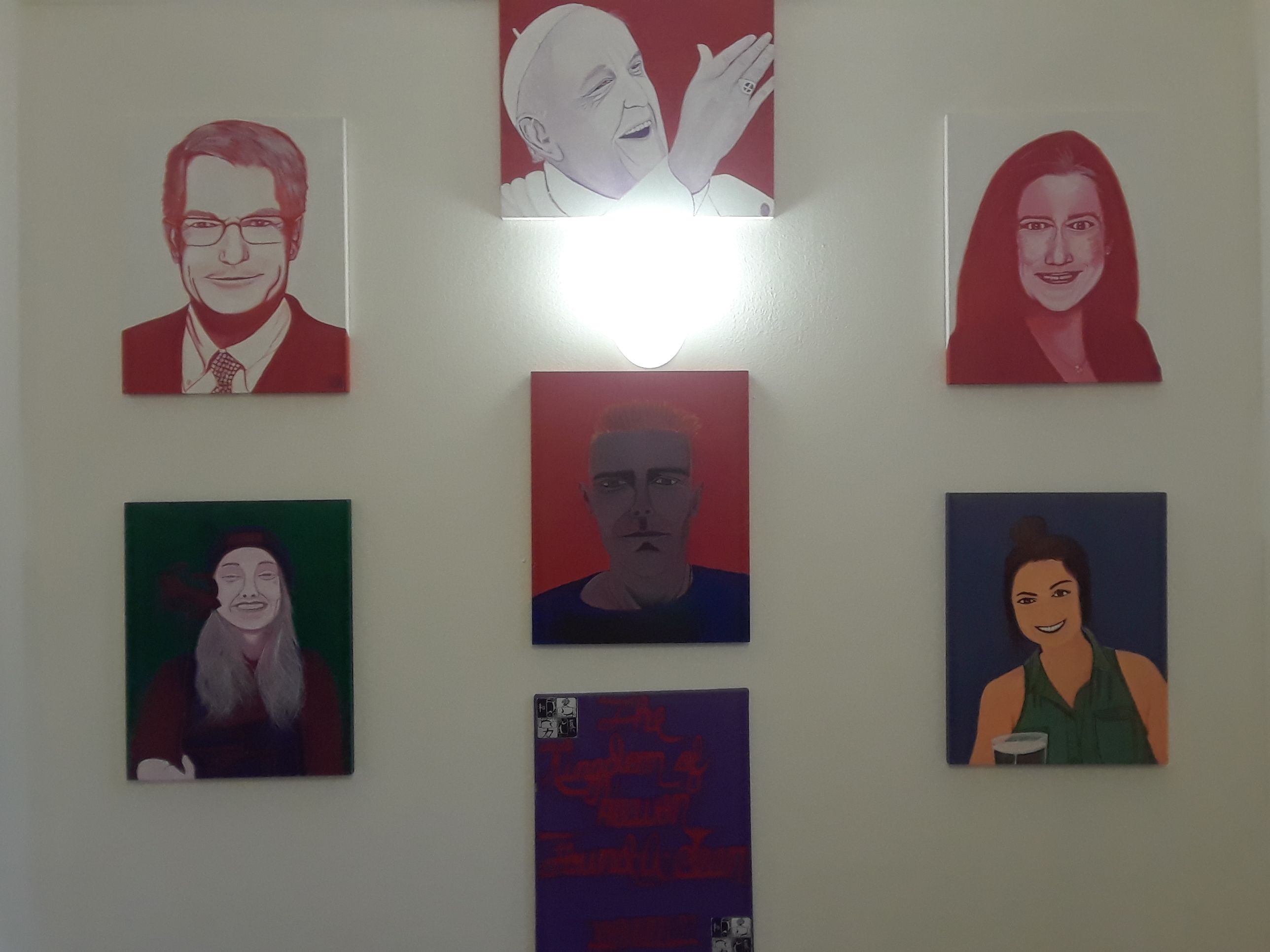 Hi everyone, and welcome to the Fabulous Freelance Friday Edition of the Good News Journal!  I’m not actually 100% sure if this is the 101st week of the Good News Journal, I was ‘guestimating’, and it is close to accurate.  I Imagined March as a new beginning, and rather than go back and do the math, I decided that We would begin the next ‘C-entury’ in Harmony with the beginning of March.

And, speaking of March, I absolutely feel like I am ‘marching’ into Spring this year!  The King has a Keep!  I cannot even begin to tell You how happy I am.  I seriously walk around My apartment over and over and over and over…  You get the Idea.  Just to look, admire, visualize, dream.  It is actually more perfect than I could have imagined, seriously!

This is My ‘new’ back, kitchen wall. 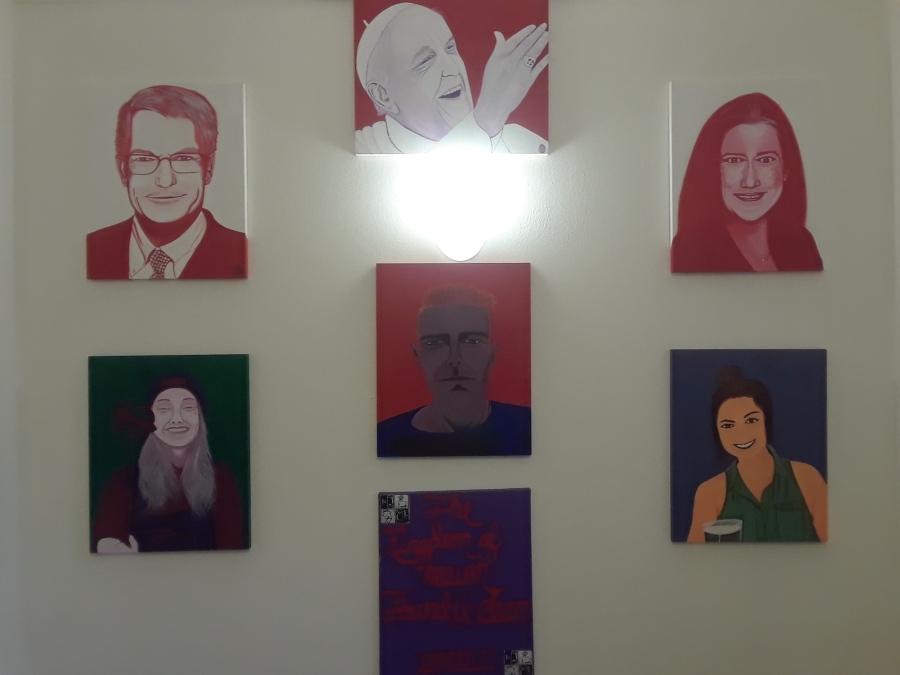 Haha!!!  How cool is that?!  You know how the Saints would always be depicted with halo’s of light around their head’s?  It wasn’t even intentional, I was just trying to work around the light, but it seems to be in the perfect spot. 😉

I really don’t like My self portrait, so I am going to be painting over it, and that Will be My first project.  However, the ‘Magic’ of it Will still remain, as the original portrait Will be underneath.  It also does a better job of depicting the character, as the new portrait Will be a product of the first.  Kind of like the Idea of conscious Mind becoming the sub-conscious Mind, or vice-versa.

My apartment is truly a dream, I just come up with one inspirational Idea after another.  One thing I Will have time for, is creating.  New artwork, Writing My Blog, managing My social media accounts and presence more closely, and war King on any legal Matters I may have to deal with.  Right now, there is still the Matter of My deceased father’s Estate.

It’s kind of interesting because I think I mentioned some time ago that there was a young woman involved in the whole mess (Tiffany, as cliché as can be) and it was the one thing I really didn’t like as I know she’s just a vulture looking for a share of My father’s estate she doesn’t deserve.  However, she produced a ridiculous hand Writ lease that some law firm My brother spoke to said was legally binding.  I told My Brother right away that it wasn’t.  It was made under duress for one, and was conditional for two.  But I figured eventually the lawyers would figure that out, and they did.

However, the ‘contingent’ Will had My Brother Acting as Trustee and his intention was to split the remaining half of My father’s estate between My Self, My sister, and My Brother (Tiffany was allegedly getting half).  Now they say the Will is no Good (big surprise), and for whatever reason, My Brother has decided that maybe My sister should deal with it and act as Trustee.  So, while I was facing potential homelessness, My Brother is Facebooking Me as much as three times a day to find out if I sent the letter of consent to Tanja’s lawyer.  I have to provide a return address for their office to contact Me at, and they can’t even wait to find out if I get an apartment?

Anyway, having all this relaxed Mind space has allowed My Vision to clear and I decided not to Give My sister consent to manage My father’s estate.  She married into another House, she has not legitimate claim of right to My father’s estate at all.  At least, not so long as My Brother and I are alive.  I am the oldest living son which makes Me the superior stake holder in the estate.  I think maybe My Brother and Sister didn’t know that.  I do.  So any law firm Will need My consent.  My sister didn’t even tell Me about her daughter, I would have no Idea I have a niece if My mom had not insisted on telling Me.  (My Mother is an angel and would never do something so cruel and unkind for no reason – only My sister would do that and take pleasure in it, if at My expense!)

So I generally just brush all of this stuff off.  Would You really Wish to be a part of someone’s life if this is how they behave?  No.  Relations with My sister are exclusively to keep the peace.  After getting moved in and looking at the envelope I had prepared to send to My sister’s lawyer, I started re thing King the whole Matter and decided My sister has no right to My father’s estate and Will get no settlement.  I Will only consent to My Brother administrating the Estate if he Honours these conditions, otherwise I Will Claim the Estate My Self.

The reason I changed My Mind is because My brother and sister Wish to just liquidate the eleven acres or whatever it is he has, use the money to pay off his debts and divide the difference between the three of Us equally.  All sounds very fair and reasonable.  Problem is, I would prefer to have the land, free and clear in My name, I don’t care one iota about money.  Land has value, I can live upon it!

Anyway, they just want the money, the land is a ‘legacy’, a kingdom My Father is leaving for his kin, regardless how modest, it is a start.  If We all left land behind for Our children, no One would be homeless, right?  Claiming the land as the House of von Dehn would also Give Honour to My father’s Life, show that he did create something of value with all of his energy, and as twisted as he was, he did have idealistic views about family, and would Wish to leave land behind for his siblings.  The fact that there is no Will is also suspicious for Me because I am confident My father knows that without one, I hold the superior claim.  I know this because he repeatedly told Me, taking Me OUT of his Will was My punishment.  I believe he didn’t leave a Will because he knew it would fall to Me if he didn’t.  He told Me My sister had ‘disowned’ him and refused to speak with him, but My Brother was always ‘Good’.  So he didn’t want My sister to have anything, I am going to make sure that request is Honoured.

Anyway, in another month or so I Will have internet again, Will be Writing more and Will be war King from My new home office.  In the meantime, I’m going to enjoy having an art studio and get some painting done!